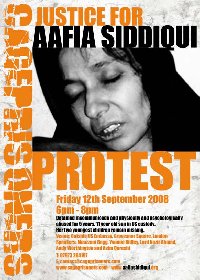 Outside the US Embassy, Grovesnor Square, London

A petition for Aafia Siddiqui as well as leaflets and postcards will be available. Donations will be collected for Aafia\’s fund.

Please design and bring your own banners!

WHO IS AAFIA SIDDIQUI?

Dr Aafia Siddiqui, the American educated Pakistani scientist and mother of three was detained for years by the US in Bagram. She has been the victim of the US programme of secret detention for five years since having been kidnapped in Karachi by Pakistan security services in 2003 along with her three children.

On Monday 4th August 2008, federal prosecutors in the US confirmed that Aafia Siddiqui was extradited to the US from Afghanistan where they allege she had been detained since mid-July 2008. The US administration claims that she was arrested by Afghani forces outside Ghazni governor’s compound with manuals on explosives and ‘dangerous substances in sealed jars’ on her person. They further allege that whilst in custody she shot at US officers and was injured in the process.

According to her lawyer, Elaine Whitfield Sharp, “We do know she was at Bagram for a long time. It was a long time. According to my client she was there for years and she was held in American custody; her treatment was horrendous.”

Aafia Siddiqui now faces trial in the US in circumstances that can only be described as strange at best. Questions remain as to her own whereabouts over the last five years and still that of her children; the US government have recently acknowledged that her eldest son Ahmed, an 11 year old US national, is in Afghan custody. The whereabouts of her youngest two children remain unknown.

Aafia\’s health has deteriorated since her transfer to the US on August 4th. She suffered multiple bullet wounds whilst in custody, the loss of part of her intestine, and extensive surgical incisions resulting in multiple layers of external and internal stitching prior to her extradition. There are a number of other healths concerns and subsequently her medical condition condition needs to be fully investigated by several different specialists. Physical injuries aside, Aafia’s psychological injuries obviously leave deeper scars. Her ordeal is heightened by the degrading and humilating strip and cavity searches she is forced to endure before every legal visit.