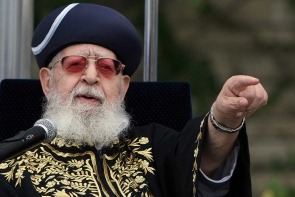 The death yesterday of Israeli Rabbi Ovadia Yosef triggered a round of tributes from the diplomatic community and the Palestinian leadership.

Reacting to news of his demise, Matthew Gould, the British Ambassador to Israel, said: “I was honoured to witness first-hand his love for mankind and his wish for peace.”

The Palestinian Authority Chairman Mahmoud Abbas, who heard the news while meeting Israeli politicians, is reported by the Times of Israel to have reacted by asking his interlocutors to send his condolences to Yosef’s family “in the name of the Palestinian people”.

Such sentiments are surprising in view of the Rabbi’s appalling record of publicly stated loathing for non-Jews.

In a sermon in 2010 he said: “Goyim [non-Jews] were born only to serve us. Without that, they have no place in the world – only to serve the People of Israel.”

But Yosef reserved his vilest bigotry for the Arabs. In a 2001 speech to mark the Jewish festival of Passover he said: “It is forbidden to be merciful to them [Arabs]. You must send missiles to them and annihilate them. They are evil and damnable.”

Just a year earlier the rabbi had attracted controversy by referring to Palestinians as snakes. “He is bringing snakes near us. What kind of peace do you want to make with a snake?” he asked, referring to then PM Ehud Barak’s attempts to negotiate with the Palestinians.

The Islamic Human Rights Commission (IHRC) believes that Rabbi Yosef’s comments are not the isolated views of an out of touch religious recluse but rather they betray the racial supremacism that is at the heart of the Zionist ideology.

“Rabbi Yosef doesn’t deserve any panegyrics. He was a hate preacher,” said IHRC chair Massoud Shadjareh. “He gave religious legitimacy to an ideology that is designed to dispossess and oppress the Palestinian people.”