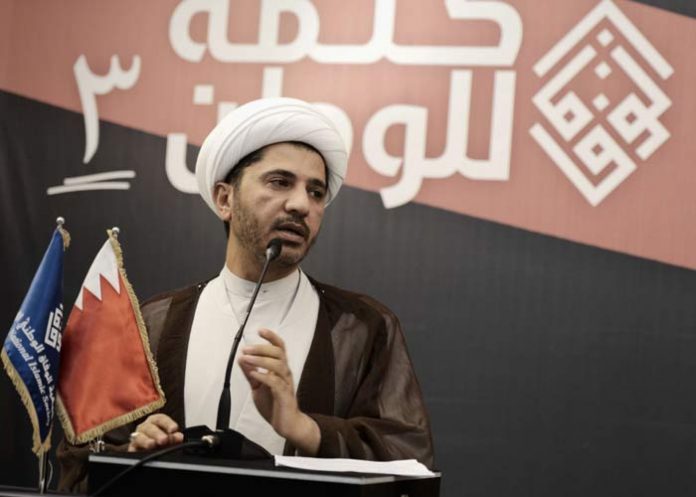 The arrest of one of Bahrain’s most influential and popular opposition figures highlights the country’s continuing contempt for civil rights and public demands for political reform.

Sheikh Ali Salman, the leader of Bahrain’s biggest political opposition group Al-Wefaq, was placed under arrest following a day of questioning at the General Directorate for Criminal Investigations in the capital Manama. He is accused of receiving support from abroad, false incitement, incitement against the government and incitement to hatred. Additional charges include broadcasting false news with the objective of causing public panic and charges relating to claims that he was tortured in prison.

The arrest came after a mass demonstration last Friday in which Mr Salman joined thousands of people in Manama demanding the dismissal of the government and parliament.

IHRC believes that Sheikh Ali’s arrest is part of an ongoing campaign of repression aimed at stifling calls for reform of Bahrain’s autocratic monarchical system.

Only a few weeks ago leading Bahraini human rights campaigner Zainab al-Khawaja, the daughter of an activist serving a life sentence for his part in the 2011 uprising, was handed a three-year jail term for ripping up a picture of King Hamad. Nearly all the major opposition parties including Al-Wefaq boycotted parliamentary elections held last month saying they were ‘window dressing’ in the absence of any meaningful progress on establishing fundamental rights and curbing the powers of the royal family.

Bahrain’s reluctance to embrace reform is in large part a result of the continuing support it receives from the West. Earlier this month the UK Defence Secretary announced that Britain would be establishing a naval base in the country giving it a permanent base in the kingdom since withdrawing armed forces from its former protectorate in 1971. The move came despite a House of Commons Foreign Affairs Committee report published in November which found that there was “little or no evidence that Bahrain has made enough progress in implementing political reform and safeguarding human rights.”

IHRC chair Massoud Shadjareh said: “The arrest of Sheikh Ali is yet more proof of the bankruptcy of this ridiculous regime. Perhaps what is more telling however is the West’s response. The little or no condemnation highlights once more that the reality of the situation simply thus: The Bahraini regime continues its repression with the full blessing of those who created and support it.”