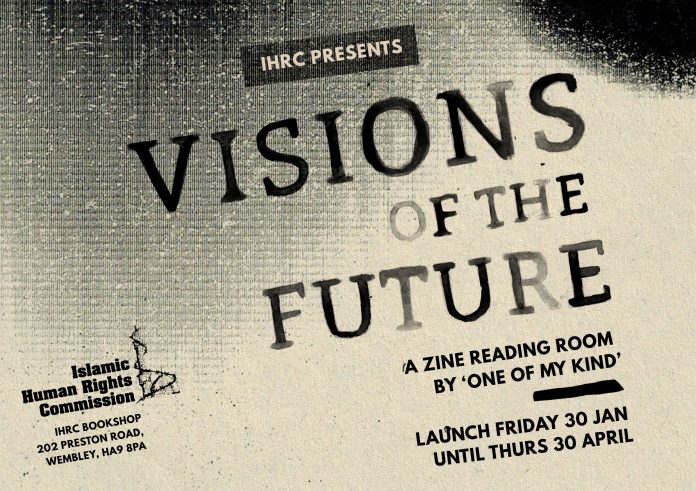 “You have to act as if it were possible to radically transform the world.

And you have to do it all the time” – Angela Davis

In January IHRC Gallery will be launching its latest exhibition: Visions of the Future curated by the One of My Kind zine (OOMK) – a handcrafted independent art publication exploring the art, activism and spirituality of women. While the Gallery has previously hosted collections and installations of art and photography, Visions of the Future transforms the Gallery for the first time into a reading-room of radical printed material.

Featuring a curated collection of zines, prints, posters and books by women artists and writers, OOMK utilises the possibilities of self-publishing to explore hopeful imaginings of the future. What do we hope for the future of humanity? How do we prepare?

Drawing widely from a diverse pool of artists, Visions of the Future forms a compendium of the anxieties lived with everyday and the multiple transformative solutions imagined in response. While one section of the exhibition dedicates itself to a series of especially commissioned printed pamphlets, another explores histories of activism and the legacy of communities who dreamed to change the world.

Visions of the Future is structured to expand throughout the duration of its stay, with space for new printed material to be added by visitors in response to the existing exhibition.

Throughout their stay OOMK will host a series of events in the Gallery exploring women, autonomy and publishing. Based in North London, OOMK is published bi-annually by two graphic artists and a writer – Sofia Niazi, Rose Nordin and Heiba Lamara. Their imaginative projections reflect an assured belief in God, print and the power of DIY.

In the past the IHRC Gallery has hosted the likes of Intifada Street’s Mohammad Hamza, Mamade Kadreebux and Naazish Chouglay of Labbaik Arts among others. Head of Research, Arzu Merali, states that part of IHRC’s philosophy has been has been “breaking down divisions between culture, law and politics, we are out there working for justice. I think some cultural aspects of our existence are not emphasised enough, there are many reasons for that, but where you can seek solace and gain inspiration, it’s all part of healing and important to focus on.”