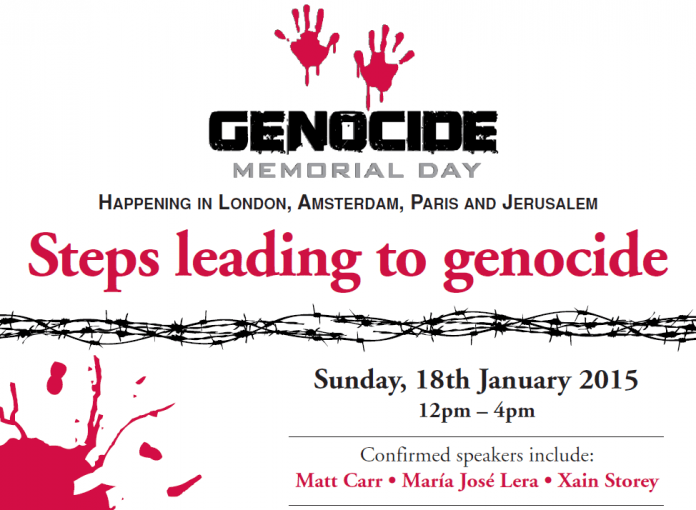 The demonisation of communities with the aim of inciting hostility against them will once again be the focus of this year’s Genocide Memorial Day, to be observed this weekend.

Simultaneous events are to be held in London, Amsterdam, and Brussels to highlight “steps to Genocide” – the political, social and economic processes that precede all genocides and which provide an indicator of looming crises. A separate event is planned for Jerusalem in February.

For the first time the occupied city of Jerusalem will be among the cities marking Genocide Memorial Day.As a city which encapsulates an ongoing genocide, Jerusalem is an poignant choice of location. Tens of thousands of Palestinians have been killed by Israel in acts of genocide since the Zionist state came into being in 1948. The Zionist ideology on which Israel is founded is by nature genocidal in that it envisages the existence of a “Jewish state” at the expense of the native inhabitants. During and since the creation of Israel hundreds of thousands of Palestinians have systematically been displaced to make way for Jews to settle on their land.

Raza Kazim of IHRC said: “”I would urge that people concerned with xenophobic and racist oppression and the resistance to it to come and participate with great minds, thinkers and activists as to how we can better understand the steps that lead to genocidal acts in order to resist them better in the future. Genocide is an issue that is a direct attack on humanity, and thus needs a rigorous response from all the different communities comprising humanity”.