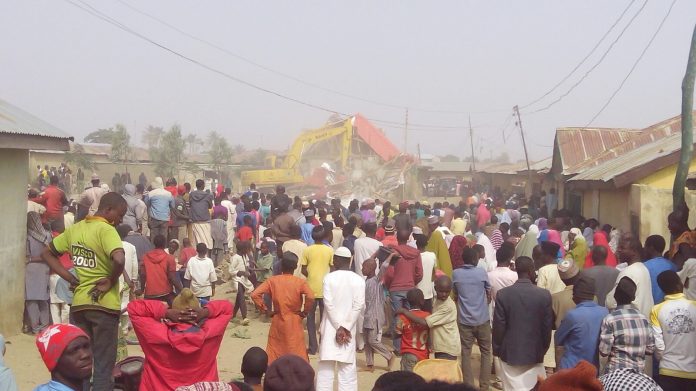 {jathumbnailoff}The Nigerian army which has in recent days killed and wounded hundreds of supporters of the country’s Islamic Movement has destroyed the home and burial place of its detained leader’s mother.

Earlier today a bulldozer ripped through the building that houses the tomb of Hajja Saleha Muhammad. Photos from the scene (attached) show crowds gathered outside the site as a bulldozer razes the building.

Sheikh Ibrahim El-Zakzaky was shot and detained last week when soldiers attacked the movement and its headquarters in Zaria. His condition or whereabouts are still unknown. A picture which emerged of the wounded sheikh showed him being forced to sit on the floor while he is being tortured by military personnel. His face shows signs of evident beating and there is a bullet hole to his torso.

The move against Zakzaky’s mother’s grave supports the view that the military is deliberately targeting the symbols and institutions of the Islamic Movement. Sheikh Zakzaky’s personal residence in Zaria has already been destroyed, as has the Hussainiyyah Baqiyatullah which served as the movement’s centre, in a bid to uproot the popular grassroots movement in its heartland.

The army has already destroyed dozens of graves belonging to victims of last year’s Al-Quds Day massacre when the army opened fire on a peaceful procession. A mosque which stood near the site of the graves has also been levelled. Three sons of the Sheikh were among the dead.

Following the attack on the Islamic Movement last week IHRC received photographs and testimonies of mass graves where the army is reported to have buried fatalities from the killing spree in Zaria.

IHRC is renewing its call on the African Union, the United Nations and the Commonwealth to suspend Nigerian membership and privileges, and to demand the release of all those detained.

IHRC chair Massoud Shadjareh said: ìIf these reports are true then they are another proof that the army’s claim to be acting in self-defence is baseless. The graves which have been destroyed pose no threat to anyone let alone the military. To the contrary their demolition appears to be part of a planned, systematic attempt to eradicate all signs and symbols of the Islamic movement”.ÂÂÂÂ