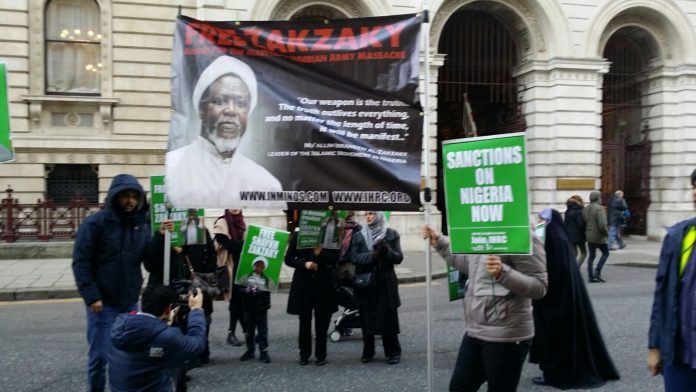 A demonstration taking place this weekend outside the Nigerian High Commission in London will call for the release of the detained leader of the country’s Islamic Movement and for the perpetrators of recent atrocities to be brought to justice.

During the unprovoked army assault, the symbols and institutions of the Islamic Movement were targeted, Sheikh Zakzaky’s personal residence in Zaria was destroyed, as was the Hussainiyyah Baqiyatullah which served as the movement’s centre. The army destroyed the home housing the tomb of Sheikh Zakzaky’s mother, and dozens of graves belonging to victims of last year’s Al-Quds Day massacre in which soldiers opened fire on a peaceful procession. A mosque which stood near the site of the graves has also been levelled.

Following the attack on the Islamic Movement IHRC received photographs and testimonies of mass graves where the army is reported to have buried fatalities from the killing spree in Zaria. The Islamic Movement has also accused soldiers involved in last month’s bloody attack of raping women and burning corpses of those it had killed.

The demonstration will take place on Sunday 10 January at 2-3pm outside the Nigerian High Commission, 9 Northumberland Avenue, London, WC2N 5BX