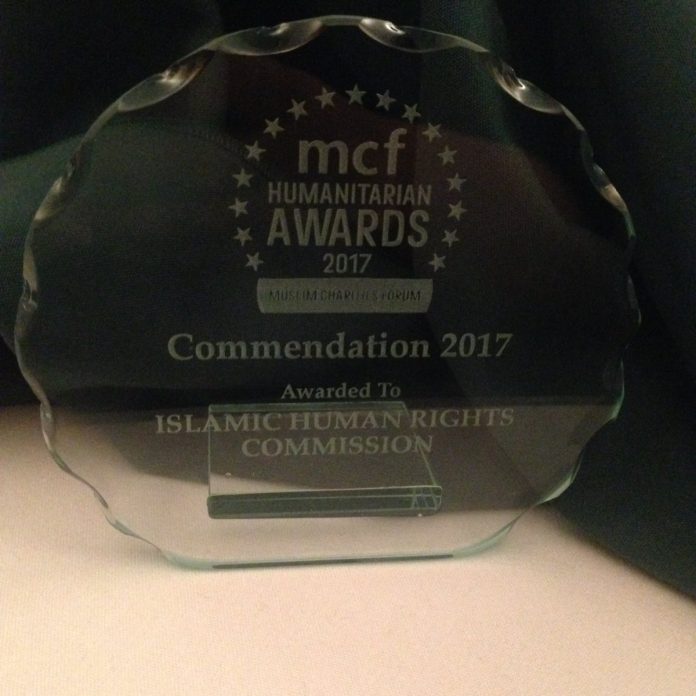 IHRC is delighted that the IHRC Legal campaign has been commended at the 2016 Muslim Charities Forum Humanitarian Awards.

IHRC Legal received the accolade at the Forum’s inaugural event in recognition of the work it performs to help people facing discrimination in employment and immigration problems.

IHRC Legal is delighted to have its work recognised not least because the department is still in its infancy having been set up in 2014 in response to the high volume of requests it received for legal advice and representation.

The department specialises in employment and UK immigration law. It also advises on the full range of immigration applications to the Home Office. Immigration has become an increasingly large part of the department’s workload as a result of successive changes to legislation that make it difficult for people and their families to settle in the UK.

Its employment work is necessarily understated because of the sensitive nature of the work we are asked to do. Many clients and employers ask to remain anonymous which means that its successes rarely attract much publicity. To date the department has had a 100% success rate.

In 2015 the department introduced a Legal Defence Fund to support those wishing to pursue their legal rights. The fund was the first of its kind to be set up by a Muslim organisation in the UK and is used to support IHRC Legal clients in paying for some of the costs incurred when pursuing employment and discrimination cases.

IHRC’s Head of Advocacy Abed Choudhury said: “We are delighted that our work in these areas has been recognised. It is a testament to the determination and ability of our legal team. Where others would have given up they have turned over every stone and faced down every challenge to seek justice for their clients.”

The Awards ceremony was held at Church House in Westminster, London on 22nd February 2017.