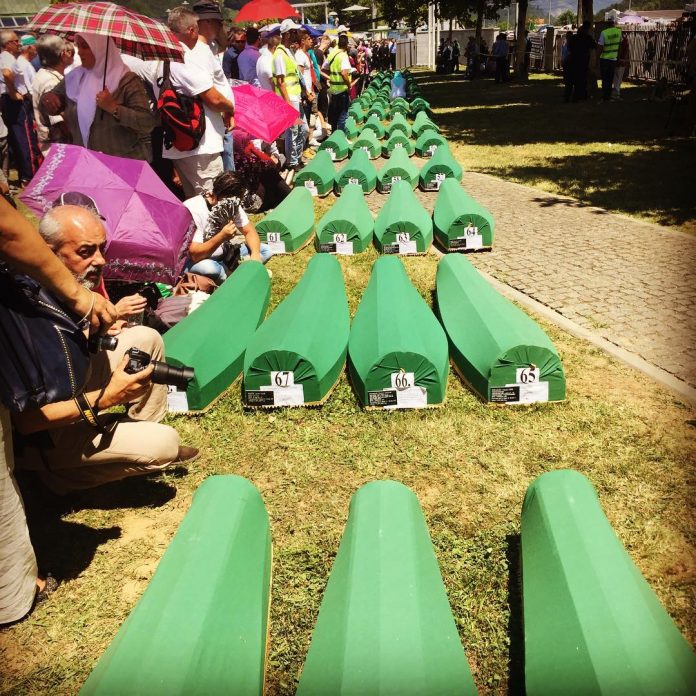 One of the winners of this year’s Genocide Memorial Day competition is in Bosnia to learn more about the atrocities carried out against the country’s inhabitants during the 1992-1995 conflict.

Tarzina Khatun was awarded the trip to Bosnia for her winning entry in the annual competition created as a way to channel young people’s literary abilities and creativity towards the theme of protecting humanity from genocide and genocidal acts.

The Bosnian war broke out after Serbian and Croatian leaders refused to respect the result of a referendum in 1992 in which the majority of Bosnians voted to gain independence from the former Yugoslavia.

Over 100,000 people died in the ensuing conflict as Serb nationalist forces sought to carve an ethnically homogeneous state out of Bosnia. 80% of the dead were Bosnian Muslims, killed as they were deliberately cleansed from their towns and villages, rounded up in concentration camps to be murdered or exterminated in cold blood.

The Srebrenica massacre of July 1995 remains the most haunting symbol of the conflict. It was the biggest organised slaughter of Muslims in modern Europe – 8000 men, women and children were butchered by Serb forces under the noses of UN troops in what was supposed to be a UN-protected ‘safe haven’.

In an attempt to conceal the crime, some Serbian forces dug up the bodies of Srebrenica’s victims and moved them to other grave sites across Bosnia. More than 1,000 remain missing, with more being found and returned to Srebrenica for burial every year.

The International Criminal Tribunal for the former Yugoslavia has jailed a number of Bosnian Serbs over the Srebrenica massacre. Last year it convicted the wartime Bosnian Serb leader Radovan Karadžic of genocide and sentenced him to 40 years in prison.

This month Bosnians and others all over the world will hold events commemorating the 22nd anniversary of the genocide.

It is vital that crimes of this scale are recognised for what they are and that their memory is preserved for future generations. The visit of the GMD winners is intended to serve this purpose amid a continuing effort in some quarters to deny that the genocide ever took place.

The current mayor of Srebrenica Mladen Grujicic, a Serbian nationalist, denies that the massacre was genocide.

Srebrenica, a Muslim-majority town before the war, fell within the territory of Bosnia’s Serb Republic under the peace deal; its 7,500 population is now 55% Serb and 45% Bosniak (Muslim).