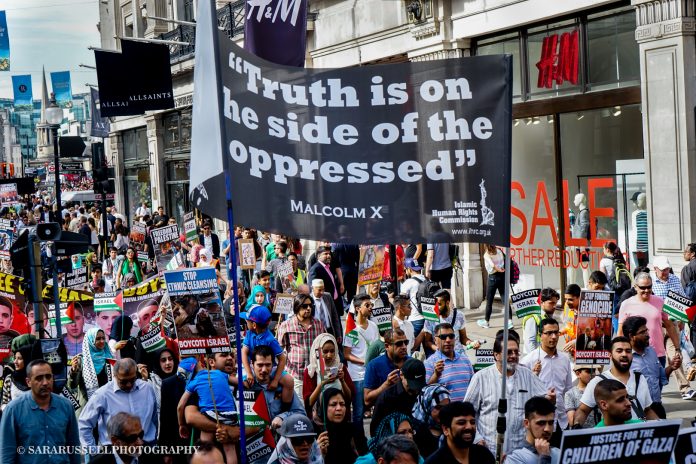 This year’s Al-Quds Day demonstration in support of the beleaguered Palestinians in the holy land will go ahead in London this weekend despite an unprecedented demonisation campaign by far right and pro-Zionist groups determined to undermine and disrupt the event.

Last year a similar demonisation campaign radicalised Darren Osborne into driving a truck into Muslim worshippers in London’s Finsbury Park killing a Muslim man. However his intended target had been the Al-Quds Day rally which he was only prevented from reaching by police security measures.

Al-Quds Day has been a fixture in the capital for over 30 years the annual event is a general show of solidarity drawing in people of all faiths and political persuasions. This year’s London event will again feature people of all political and religious persuasions including Jews, Christians and Muslims.

This year the rally will feature a record-breaking Palestinian flag being paraded through the streets. At 70 metres long the flag is the largest ever Palestinian flag ever to be made with its length signifying the duration of the crippling Israeli occupation.

Where: Gathering outside the Saudi Arabian Embassy in Charles St, London, W1J 5DZ