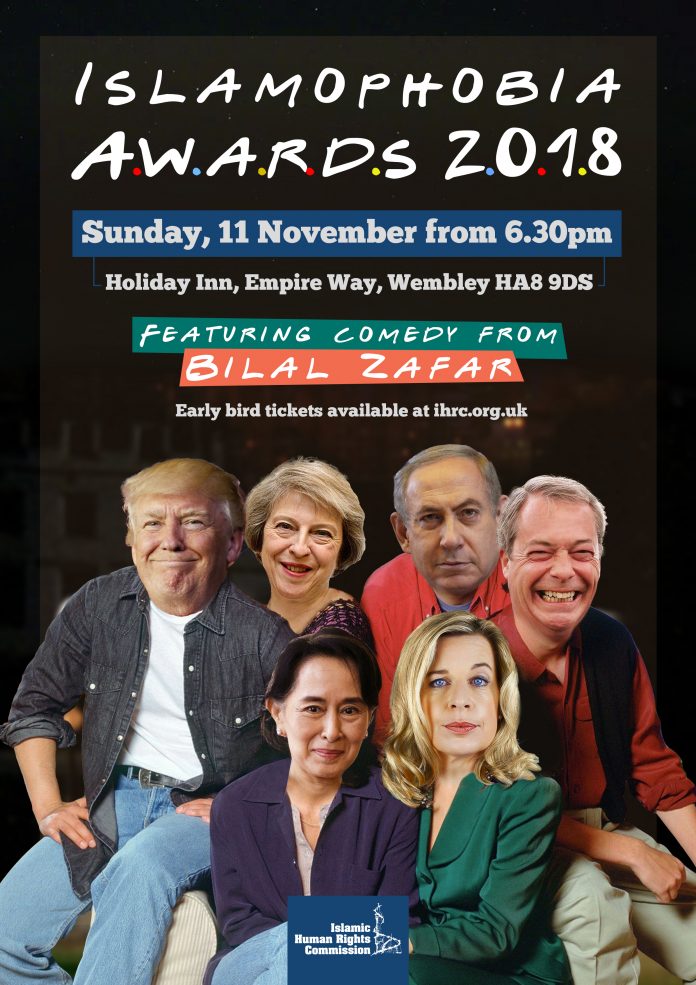 Islamic Human Rights Commission have announced the nominees for the Islamophobia Awards 2018. The gala dinner features a satirical awards ceremony where those who have been the most Islamophobic over the past year are awarded for their ‘accomplishments’. The event aims to subvert Islamophobia through comedy and revue while simultaneously addressing a serious and significant issue in a creative manner.

Following trends of years past, the awards are split into four separate categories: UK, International, News/Media and Film/Book/TV Series. Nominees were submitted by the general public who had the chance to write in whomever they felt had displayed prominent cases of Islamophobia. The UK category sees familiar faces such as Katie Hopkins, Maajid Nawaz and Tommy Robinson. Boris Johnson makes a reappearance after his comments comparing Muslim women wearing the niqab to “letter boxes.”

Nominees in the ‘International’ category are literally spread across the globe with the inclusion of literal countries as well as individual politicians. The past year has seen Muslims repressed, monitored and forced into camps in China. The Muslim Rohingya minority in Myanmar continue to face persecution and violence at the hands of General Min Aung Hlaing with no intervention from our other nominee and last year’s winner Aung San Suu Kyi. Australians Pauline Hanson and Fraser Anning are also in contention for the prize. Recently Fraser Anning called for a “final solution” to deal with the “immigration problem.”

The ‘News Media’ category has the usual favourites with the likes of The Sun, Daily Mail and Fox News sure to be strong contenders. David Aaronovitch and Rod Liddle have both produced similar works of journalism which make excuse for and justify discrimination towards Muslims. French publication Le Parisien published an open letter directly linking Islam to anti-Semitism and journalist Andy Ngo wrote a piece which referenced “Islamic England.” The ‘Movie/Book/TV Series’ category sees new films from the past year like ‘The 15:17 to Paris’ and Beirut with the common ‘Muslim terrorist’ stereotype. TV Series that feature include ‘My Week as a Muslim’ where a white woman donned brownface makeup to look like ‘a Muslim.’

Winners will be highlighted during the spoof awards ceremony which will be taking place on Sunday, 11 November 2018.

MOVIE/BOOK/TV SERIES:
• The 15:17 to Paris
• Beirut
• Lost Boys? What’s Going Wrong for Asian Men
• Padmaavat
• My Week as a Muslim
• Real Time with Bill Maher
• Roseanne
• No Go Zones: How Sharia Law is Coming to a Neighborhood Near You by Raheem Kassam
• Bodyguard

General public can vote for who wins here: https://www.ihrc.org.uk/activities/events/19057-islamophobia-awards-2018-vote-now/

General public can buy tickets here: http://shop.ihrc.org/islamophobia-awards-2018-tickets
For all media enquiries and to register to attend please email nadia@ihrc.org or call 020 8904 4222