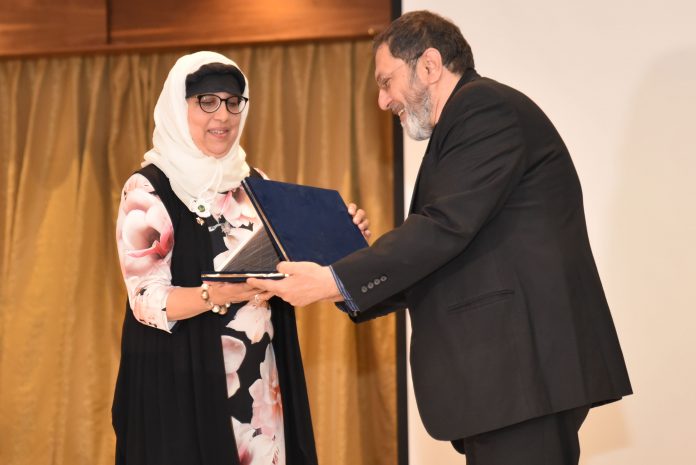 IHRC’s annual ‘Islamophobia Awards’ took place on 11 November 2018. The evening of comedy and revue is also a chance to recognise those who have struggled and fought against Islamophobia by awarding them.

The first recipient on the night was Ian Law – a Professor at the School of Sociology and Social Policy at the University of Leeds. An expert in racism and ethnicity studies for the past few decades; he is the founding director of the Centre for Ethnicity and Racism Studies at Leeds. He most recently acted as the lead of the Counter Islamophobia Kit which sought to use counter-narratives of Islamophobia across EU member states. Ian’s work has clearly marked him as someone who is passionately committed to the struggle against racism and Islamophobia. Watch his ‘Thank You’ video here.

Grassroots organisation ‘Scotland Against Criminalising Communities’ was also awarded on the night. For years they have endeavoured in campaigning against laws and policies whose effect is to criminalise political and community activity with particular focus on the power of Britain’s anti-terrorism laws. SACC is an organisation that stands against racism, especially state and institutional racism. Over the years their defence of civil liberties has manifested itself in different ways from campaigns and protests to conferences and events. Their work on the Prevent Strategy, support for refugees and asylum-seekers, commitment to end the excessive use of state powers to criminalise political activity, ceaseless support for Palestine – has all been exemplary.

Social enterprise Media Diversified (@WritersOfColour on Twitter) picked up a gong on the night as well. With a mission to challenge the homogeneity of voices in UK news media, through addressing the under-representation of BAME communities, their digital platform has produced numerous features and opinion pieces across an array of topics that celebrate the interests of people of colour while also highlighting and bringing awareness to the issues affecting them. They have encouraged initiatives that seek to drive representation and inclusivity of people of colour in the creative industries; they’ve published books and organised literary festivals. Their organisation as a funnel for under-represented communities and minorities to gain access to literature and culture cannot be taken for granted.

The final awards of the night were in recognition of four select Members of the European Parliament who have all committed and participated in anti-racism work. Malin Bijork represents the Swedish Left Party –and has taken a very active role in the resettlement of refugees in EU member states and has made individual stances against the deportation of asylum seekers. Jean Lambert has represented Britain’s Green Party since 1999. Her work has focused on social inclusion, workers’ rights, immigration and social security. Watch her ‘Thank You’ video here.

Soraya Post is a representative of the Swedish Feminist Initiative Party. She is a member of the Committee on Civil Liberties, Justice and Home Affairs and of the Subcommittee on Human Rights. Watch her ‘Thank You’ video here. Sajjad Karim represents Britain’s Conservative Party. He is Vice-President of the European Parliament’s Anti-Racism and Diversity Intergroup and is Chair of their Anti-Islamophobia Working Group. He has consistently voiced his stance on issues facing Muslims across Europe from the ECJ ruling on the right to wear the hijab in the workplace to the hostile environments faced by Muslims in day to day life.

For details of the satirical winners please click here