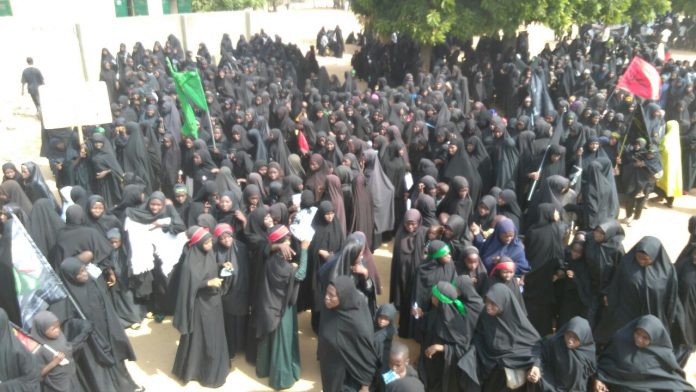 Information reaching IHRC from reliable sources in Nigeria suggests that the authorities are planning to prevent and disrupt annual processions due to take place in commemoration of the holy day of Ashura early next week.

Having failed to execute an earlier plan to arrest leading figures within the Islamic Movement of Nigeria which organises the marches, the authorities are preparing to issue a statement declaring a ban on all processions on Ashura and arrest those taking part.

Police in the capital Abuja are believed to have readied arrest warrants for procession organisers.

Ashura processions have been taking place throughout Nigeria for 40 years but in recent times have faced attacks as the government has cracked down on the Islamic Movement and its leadership.

In 2016 in Kaduna and other cities there were systematic attacks by police and hired thugs which resulted in many fatalities and many houses belonging to supporters of the Islamic Movement being damaged or burnt down.

The leaked information comes less than a week since a United Nations report criticised a leaked directive from the chief of police in Nigeria instructing police to dismantle the structures and leadership of the organisation and contain its activities in the run up to Ashura.

The UN report condemned the Nigerian government for rising violence against the Islamic Movement and the “lack of accountability” for the perpetrators. It blasted the failure of the authorities to abide by the rule of law and said the directive “sets a dangerous precedent for the exercise of the right of freedom of religion and belief, and respect of fundamental liberties and the right to life”.

Along with human rights organisations the UN believes that the persecution of the Islamic Movement arises out of official fear of its mass appeal and what it could become rather than any illegal activities on its part.

In July the federal government proscribed the Islamic Movement as a terrorist organisation but protests against the decision and the ongoing incarceration of the movement’s leader, Sheikh Ibrahim el-Zakzaky and his wife have continued around the country.

Sheikh Ibrahim Zakzaky and his wife Zeenah have been detained since the Islamic Movement was subjected to a brutal attack by government forces in 2015 resulting in the deaths of over 1000 supporters, including three sons of the couple. The attack marked the beginning of an official campaign to crush the movement which claims a mass following in Nigeria and has been highly critical of government policies especially vis a vis the United States and Israel. There is a widespread perception within the movement and also beyond that Nigerian authorities are acting on behalf of Saudi Arabia and promoting its aim of fomenting sectarian conflict in the country.