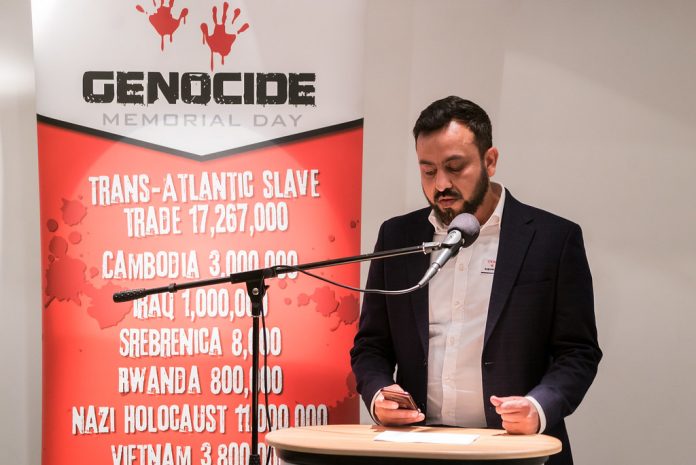 The annual Genocide Memorial Day in London passed off peacefully without incident at the weekend with an international panel of speakers sharing damning views about how economic sanctions have and continue to contribute towards genocides against developing world peoples.

An attentive audience heard how conventional methods of waging genocide have given way in the cases of many countries to less visible but equally destructive boycotts led in the main by the United States.

In Iran, Washington is trying to force regime change by making life unbearable for its 80 million population. People with rare diseases are dying because of sanctions that make the importation life-saving drugs very difficult and make prices unaffordable. Even non-US companies, worried that they may fall foul of the law or be penalised for violating US sanctions, are refusing to sell Iran goods that are not on the sanctions list.

Iran finds itself in a similar position to Iraq under the regime of Saddam Hussein. There a crushing UN Oil for Food programme applied in 1995 led to the deaths of hundreds of thousands of innocent people under the pretext of pressurising Saddam Hussein to demilitarise.

Professor Ramon Grosfoguel highlighted the case of Venezuela where US sanctions are killing tens of thousands each year in Venezuela because of sanctions. The American Center for Economic and Policy Research in Washington has calculated that due to the boycott the mortality rate increased 31% from 2017 to 2018. In 2019 the Trump administration extended sanctions to cover Venezuela’s subsidised food distribution program which benefits six million households or more than sixty percent of the population. Prof Grosfoguel said: “If you control the calories consumed by a whole population that is something international law recognises as a form of genocide.”

This was the 11th annual GMD to take place since the event’s inauguration in 2010 to remember man’s inhumanity to man in the perpetration of genocides and genocidal acts. IHRC has been holding GMD commemorations since 2010 and have attracted a variety of speakers, diverse audiences and activists of all political, religious and ethnic backgrounds in highlighting the genocidal acts that are given insufficient exposure by the mainstream media. One of the event’s main aims is to draw on the lessons of genocides throughout history so that the younger generation can recognise the signs leading up to them and prevent future atrocities.

In the run up to this year’s event IHRC received a racist email from one Zionist individual protesting about the equation of genocides with the Holocaust which now sadly seems to be the basis of a Jewish Chronicle hatchet job on IHRC and GMD.

Genocide Memorial Day to focus on deadly impact of sanctions