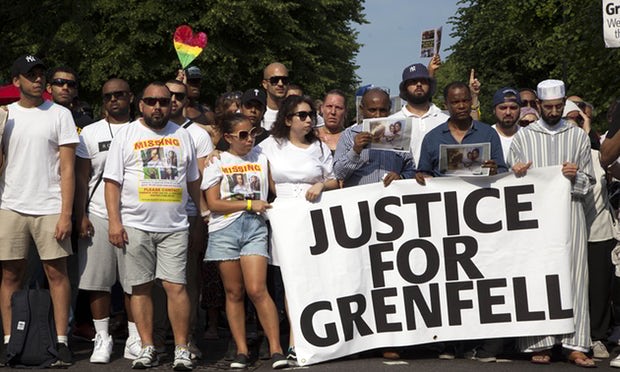 They talk about this country and call it ‘developed’,
Preaching to others like religious zealots.
But closer to home we know that chaos ensues,
Just pushed below the surface, kept hidden from view.
Except slowly but surely the illusion is clearing,
The cracks in the glass have started appearing.
They were there all along but we were made to turn away,
Kept distracted by tabloids leading us astray.
Ensuring the people could never really see,
The institutional structures causing their misery.
A myth perpetuated that being poor is a choice,
Depriving the vulnerable from ever having a voice.
The dominant narrative – if you’re poor you’re lazy,
If you challenge the system you’re considered crazy.
Now a fire has roared that could have been prevented,
A tragedy on a scale that’s unprecedented.
Our hearts are burning as it becomes plain to see,
That people’s lives are valued hierarchically.
You buy your worth and you buy your protection,
And if you’re tired of it all and start to question,
Why it should be this way, why there’s such a divide,
You’ll be attacked, scorned and villified.
And of course some will cry ‘Don’t make it political!’
But such remarks are just so hypocritical,
For the very act of not laying the blame,
Is exactly how the powerful always play this game.
Calculated, deliberate, wilful negligence,
Passing the buck without any hesitance.
The people have rage and they have every right,
Triggered by a blazing summer’s night.
But this goes deeper than just one occasion,
That raging flame was a manifestation,
Of the way our society has organised itself,
Around profit, property and worldly wealth.
Still, on the darkest nights the stars shine at their brightest,
Humanity’s worst and best are seen in every crisis.
Our communities know what communities need,
Grassroots networks taking the lead.
The fight for justice, for dignity,
Starts with ordinary people, you and me.

We come to stake our claim