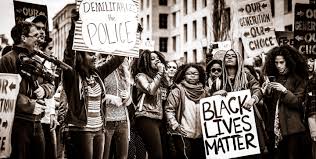 If only you knew how the colour of your skin
Dictated your life experience, just a little melanin
And you’re a ‘terrorist’ not just ‘mentally unstable’
Constantly defined by somebody else’s label
And nowadays when it’s become so clear to see
The obvious double standards and sheer hypocrisy
Still, in Las Vegas when it wasn’t Abdullah it was Stephen
But because of who he is, the media won’t even
Consider his cause, his history, his motivations
His affiliations, denominations, his ‘radicalisation’
Motive is key, you see, to categorising terror
But when it’s a muslim at the crime scene nobody ever
Takes a step back to analyse the evidence
To consider if ISIS’ claim even has any relevance
Instead we are taken down the same old road
All politicians go into anti-immigrant mode
Not that some even really need an excuse
Closet racists have now all been let loose
It’s now acceptable to write about a ‘final solution’
To use Nazi posters, to whip up fear & confusion.
We’ve reached a stage where it’s even a controversy
To claim black lives matter, and so, honestly,
I’m not sure how to raise children in a place
That will always see them through the lens of their race
Their religion, their practice, their chosen faith
And it’s not because I don’t want to be known
For being a muslim, it’s just that I’ve grown
Tired of the constant justification
Every single time there is a tragic occasion
Committed by a man, and yes it’s usually a man
Whose name isn’t Stephen, Dylan or Dan.
The whole race has never been asked to apologise
For slavery, conquest and the drive to colonise
For the KKK, apartheid, for Trump generally
For any of the manifestations of white supremacy
As though all of that wasn’t as damaging to humanity
Or maybe humanity’s always defined against someone else’s barbarity
And we all know historically who was perceived as barbaric
Who needed modernising, civilising until it became a habit
So join up the dots, connect yesterday with today
See how these underlying structures are always at play
And before anyone accuses me of being full of hate
Full of resentment and bitterness and trying to aggravate
The situation, that’s not what I’m about
I’m looking for justice and just wanted to point out
How far it is that the colour of your skin
Dictates your life experience, just a little melanin.