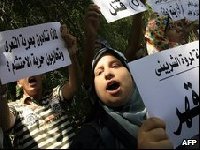 Marwa Sherbini, 32, was stabbed to death last week in a court in Dresden, a killing that caused outrage in Egypt.

She had been giving evidence against her killer after he called her a \”terrorist\” in a playground.

The head of the Arab League told the BBC the incident reflected a failure of dialogue between civilisations.

Ms Sherbini was stabbed 18 times by a 28-year-old Russian identified as Axel W, who leapt across the courtroom during an appeals hearing and attacked her in front of her husband and son.

Prosecutors said the Russian, who had been found guilty in November of insulting and abusing the woman, had a deep hatred of Muslims and acted alone.

Ms Sherbini\’s husband was attacked by the assailant as he tried to defend his wife and was also accidentally shot by German police.

He is in hospital in critical condition.

The Egyptian media have expressed outrage, asking how the incident was allowed to happen and dubbing Ms Sherbini \”the martyr of the Hijab\”, in reference to her Islamic headscarf.

The German government was criticised for what was seen to be a muted reaction.

On Tuesday, spokesman Thomas Steg defended the government\’s reaction, saying Germany had \”not been silent\”, and that early details about the case had not been sufficiently clear for a \”spontaneous reaction\”.

\”This is an abhorrent deed, one that has left us all dismayed and shocked,\” he said.

He added that Chancellor Merkel would discuss the incident with Egyptian President Hosni Mubarak at this week\’s Group of Eight summit in Italy.

\”I believe and many of us here believe that what happened is one dimension of the failure of international dialogue and the dialogue of civilisations,\” he told the BBC\’s Newshour programme.

\”Many of us believe that it did not trickle down to individuals in so many countries.\”

Mr Moussa said he was confident that the German authorities would ensure a just outcome to the affair.