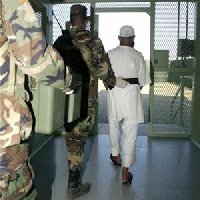 Al-Janko was tortured by al-Qaida and imprisoned by Taliban on suspicions of being a U.S. spy, then picked up by American authorities and sent to the island military prison on suspicion that he was a member of the two terrorist organizations, the Post said.

U.S. officials had argued for his detention, alleging that Janko went to Afghanistan in 2000 to join the Taliban or al-Qaida. He reportedly spent about five days at an al-Qaida guesthouse and then about three weeks at an al-Qaida training camp.

\”Five days at a guesthouse in Kabul combined with 18 days at a training camp does not add up to a longstanding bond of brotherhood,\” Leon wrote.

\”The guy was horribly tortured and then tries to report his human rights violation to the U.S. forces. He is a brave person and wants to tell his story. Instead, he gets mistaken for being a terrorist,\” Sady said. \”This is a nightmare for an innocent man being accused of all of these things.\”