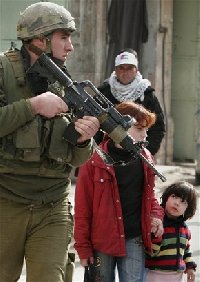 The move coincided with attempts by Israeli Prime Minister Benjamin Netanyahu to persuade U.S. President Barack Obama to soften his demand for a total freeze in Jewish settlement building in the Israeli-occupied West Bank.

Israeli and Western sources said the Israeli military would refrain from entering Bethlehem, Ramallah, Jericho and Qalqilya, except in cases where the army believed Palestinian militants were poised to attack Israelis.

\”The IDF (Israel Defence Forces) will act as little as possible to allow the Palestinians to take more initiative and responsibilities over their own security,\” an Israeli security source said, referring to Palestinian forces that receive U.S.- and European-funded training and equipment.

\”As long as they take a step forward in responsibility, we will take a step back in controlling the area.\”

But the Israeli source added: \”In circumstances of \’ticking bombs\’, or a planned attack, Israel will not hesitate to enter and thwart the attack.\”

Israel has gradually reduced its presence in parts of the West Bank in recent months but the army still carries out occasional patrols and raids to arrest wanted militants.

Under U.S. pressure to ease Palestinian hardship, Israel has recently removed several key West Bank checkpoints, including one at the entrance to the city of Jericho. Hundreds more remain in place, limiting Palestinian travel and trade.

Israel\’s move falls short of Palestinian demands that it pull its forces back from West Bank population centres to positions they held before the outbreak of a Palestinian uprising in 2000.

Palestinian negotiator Saeb Erekat said he was not aware of any Israeli commitment to pull back to those positions.

Israeli-Palestinian peace talks have been frozen for more than six months. Palestinians are demanding a full Israeli settlement freeze as a condition for their resumption.

A Western security source said Israel informed the Palestinians of its intention to limit raids in the four cities at a meeting of senior officers on Wednesday.

\”Israel is raising its threshold on when they would go in,\” the Western security source said, describing the step as a \”test case\” for other West Bank cities if Israel is satisfied with the performance of Palestinian security forces.

The decision could bolster Palestinian President Mahmoud Abbas in his power struggle with Hamas Islamists who control the Gaza Strip.

Forces loyal to Abbas carried out a series of deadly raids against Hamas members in the city of Qalqilya earlier this month.

It could also help narrow the Israeli-U.S. rift ahead of a visit on Monday of Israeli Defence Minister Ehud Barak to Washington. Barak hopes his talks with U.S. envoy George Mitchell will bridge differences over settlements.

Settlers, leftists clash near West Bank village of Safa 31 MAY 2009

URGENT ALERT: UK – IHRC requests that any organisations and/or individuals having problems with their bank accounts to come forward