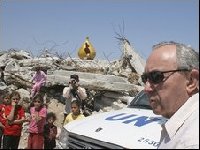 The team has spent the week interviewing witnesses and visiting sites damaged in Israel\’s three-week offensive, which ended on 18 January.

Richard Goldstone, who is heading the team, said it had hoped to hold hearings in Israel and the West Bank.

But Israel has refused to co-operate in the inquiry, accusing it of bias.

Israel charges the UN Human Rights Council – which has a record of criticising Israel over its treatment of the Palestinians – with singling it out unfairly.

Mr Goldstone said his 15-member team had visited 40 sites in Gaza and spoken to some 70 witnesses and relatives of victims. It had hoped to visit southern Israeli towns hit by Palestinian rocket fire, but was not allowed access.

Mr Goldstone said he hoped Israel\’s refusal to co-operate would not weaken the report, due for publication in September.

\”If we haven\’t dealt with facts that Israel would like us to deal with, I think we can hardly be blamed for that,\” he added, according to news agency AP.

Several investigations into alleged violations of international law during Israel\’s 22-day operation in Gaza, which ended on 18 January, have now reported back.

UN Secretary General Ban Ki-moon has requested more than $11m (£7m) compensation from Israel for damage to UN property in Gaza, after a limited UN inquiry accused Israel of targeting known civilian shelters and providing untrue statements to justify actions in which civilians were killed.

A fact-finding team commissioned by the Arab League said there was sufficient evidence for the Israeli military to be prosecuted for war crimes and crimes against humanity, and that \”the Israeli political leadership was also responsible for such crimes\”.

Palestinian rights groups say more than 1,400 Palestinians were killed during the January conflict. Israel puts the figure at 1,166.

Israeli and Palestinian estimates also differ on the numbers of civilian casualties.