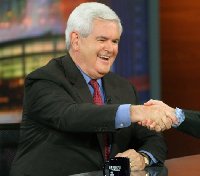 This competition, which has also drawn in Democrats to such an extent that, on Wednesday, they spinelessly voted to withhold the funds needed to close the prison, and also to prevent the transfer of prisoners to the US, has generally focused on NIMBYist (“Not In My Back Yard”) responses to proposals to move prisoners from Guantánamo and incarcerate them on the US mainland, and has, for the most part, involved politicians who think that Americans are the toughest people in the world, and who have a network of impregnable maximum-security prisons, but who, nevertheless, have been wailing like babies about the “threat” posed by a group of men who have never been adequately screened, or received a fair hearing, to ascertain whether they are in fact a “threat” to the US.

Last week, however, Newt Gingrich, the former Speaker of the House of Representatives, hit a new low in the debate by lashing out at Guantánamo’s Uyghurs (also known as Uighurs), 17 men from China’s Xinjiang province, who, after a stunning court victory last June, are the only prisoners in Guantánamo to have persuaded the Bush administration to drop its claims that they were “enemy combatants.”

After this result, a vicious battle ensued between Judge Ricardo Urbina, of the District Court in Washington D.C., and Judges A. Raymond Randolph and Karen LeCraft Henderson in the appeals court.

Judge Urbina ruled in October that the men’s continued detention was unconstitutional, and that they should be released into the care of communities in the US, because they cannot be returned to China (which has a history of human rights abuses with regard to the Uyghurs), and because no other country had been found that was prepared to accept them, but his ruling was reversed in February by Henderson and Randolph (who has a history of defending every major Bush administration detention policy that was subsequently overturned by the Supreme Court), even though the dissenting judge, Judith W. Rogers, pointed out that when the Supreme Court granted Guantánamo prisoners “the privilege of habeas corpus to challenge the legality of their detention” last June, the Court also held that “a court’s power under the writ must include ‘authority to … issue … an order directing the prisoner’s release.’”

In an article for the Washington Examiner last week, and in an appearance on FOX News, Gingrich stated bluntly that he thought the Uyghurs should be returned to China.

“Why is that our problem?” he asked. “Why are we protecting these guys? Why does it become an American problem?” “Send them to China,” Gingrich continued.

“If a third country wants to receive them, send them to a third country. But setting this precedent that if you get picked up by Americans — I mean, the Somalian who was recently brought here who’s a pirate — I mean, if you get picked up by the Americans, you show up in the United States, a lawyer files an amicus brief on your behalf for free, a year later you have citizenship because, after all, how can we not give you citizenship since you’re now here, and in between our taxpayers pay for you — this is, I think — verges on insanity.”

Gingrich’s outburst was immediately criticized by Rep. Bill Delahunt, who, as Ryan Grim explained in the Huffington Post, “ripped into” Gingrich, “arguing that his recent comments about [the] Uyghurs held at Guantánamo Bay show that he is either ignorant of international law or bizarrely allying himself with communist China — or both.”

Answering Gingrich’s question, “Why does it become an American problem?” Delahunt, who serves on the House foreign affairs committee, answered, “Well, in this particular case, we bought it. We bought it literally because these detainees were a victim of some half-cocked initiative, put out by Cheney et al, where they were purchased for $5,000.”

Delahunt added that he was surprised that Gingrich — a fervent anti-Communist who condemned China for using torture in 1997 — would ally himself with China. ”I guess he is unaware of the [United Nations] Convention Against Torture which obligates us not to return them to China because it’s clear they would be persecuted and undoubtedly subjected to torture, incarceration and all sorts of degradation, given the history of the red, godless Chinese communist government,” he said, adding, “What I find particularly ironic is, here’s the former Speaker allying himself with the Chinese communists. Quite an interesting development. I guess his fervent anti-communism has abated somewhat.”

In response to Gingrich’s comments, the Uyghurs themselves sent a response from Guantánamo via their translator, Rushan Abbas, who has been working with them since 2002. “Why does he hate us so much and say those kinds of things?” they asked. “He doesn’t know us. He should talk to our attorneys if he’s curious about our background. How could he speak in such major media with nothing based in fact?”

Abbas proceeded to explain, “They just cannot understand. How come the media doesn’t even verify the story? How could they just publish something like that without checking whether what he says is true or not?” but as Ryan Grim noted, “The Uyghurs are apparently under the misconception that American columnists are fact-checked for accuracy.”

Today, a new commentator has stepped forward to defend the Uyghurs. In an article for Foreign Policy, “Meet The Real Uyghurs,” Nury A. Turkel, a Uyghur American attorney, who has been involved in the resettlement plans that were scuppered by the Justice Department and Judges Randolph and Henderson, presented a much-needed antidote to Gingrich’s unjustified assault on the Uyghurs from the perspective of someone with first-hand knowledge of the Uyghurs’ predicament in China, under the sub-heading, “Newt Gingrich needs to read up before he defames my entire ethnic group,” and I’m cross-posting it here as an important piece of work from someone I have been glad to correspond with over the last few years.

Meet the Real Uyghurs
by Nury A. Turkel

Writing in the Washington Examiner last week, former speaker of the US House of Representatives Newt Gingrich warned the Obama administration that a group of 17 Uyghurs, held in Guantánamo Bay since 2002, would be a threat to US national security if transferred to American soil.

“[T]hey are trained mass killers instructed by the same terrorists responsible for killing 3,000 Americans on September 11, 2001,” he wrote.

“They have no place in American communities.”

These claims are irresponsible and untrue. And the title of his work, “Let’s NOT meet the Uyghurs” extends the accusation to all Uyghur people. Uyghurs are not terrorists; nor are they a threat. In fact, Uyghurs could be a natural US ally.

Uyghurs are the Tibetans you haven’t heard about. Ethnic Turkic people from the Chinese Xinjiang Uyghur Autonomous Region, Uyghurs have long faced discrimination and persecution as a minority — a fact recognized repeatedly by the US Congress and State Department, which has noted China’s insidious strategy of using the US war on terror as pretext to oppress independent religious leaders and peaceful political dissenters.

Uyghurs’ struggle for self-rule is one against dictatorship and communism, not one to establish a sharia state through violence (as Gingrich claims, in a curious echo of Chinese government propaganda).

Nothing about the Uyghur cause involves hostility toward the United States or association with terrorist groups.

In the case of the detained Uyghurs, this too has been recognized by the United States. In June 2008, a DC Circuit Court unanimously ruled that the US government’s designation of Huzaifa Parhat, one of the 17 Uyghurs at Guantánamo, as an enemy combatant was invalid.

The US government’s case, they concluded, was insufficient, unreliable, and based on attenuated guilt-by-association reasoning.

The panel found no evidence that Parhat was a member of the East Turkestan Islamic Movement (ETIM), that ETIM was associated with either al-Qaeda or the Taliban, or that ETIM had ever fought against the United States.

Supposed proof that detainees had undergone “terrorist training” is dubious at best.

The detainees were able to break down and reassemble a single Kalashnikov rifle. To classify this experience as “terrorist training” would require a radical logic leap.

Every one of the 17 Uyghur detainees at Guantánamo has repeatedly denied being part of ETIM, or of being sympathizers of al-Qaeda or the Taliban.

They should remain innocent — both legally and in public discourse — unless proven guilty.

As the discussion about the fate of these men goes forward, it is not the danger that the Uyghur detainees pose to the United States that is of greatest concern, but the danger China poses to detainees.

Were it not for the grave threat of persecution that these men face from the Chinese government, they would have been returned home years ago.

In just one example from 2002, a US Department of Justice report cites claims that US agents at Guantánamo collaborated with Chinese counterparts in the rough treatment of Uyghur detainees prior to scheduled interviews with the Chinese agents.

Finding a new home for the displaced Uyghurs is the US government’s duty. Gingrich finds preposterous the idea of relocating them to a place like, as he put it, “Fairfax Country Virginia, where there is already a sizable (non-terrorist) Uyghur community.”

But why is the idea so preposterous? The Uyghurs are not a threat to US communities. Just look at the five Uyghur companions who were released from Guantánamo in 2006 and have lived peaceably and productively in Europe for three years now.

I am a new citizen of the United States, but I know enough about the shining ideals that brought me — and millions of other immigrants — here to know that fear-mongering rhetoric like Gingrich’s is the real threat to America.

Louise Casey’s common (non)sense and the illogic of racism