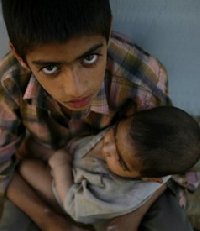 The \”we\” was the US military, and the discussion took place right after the Pakistani Taliban moved into the Swat Valley, according to a Pakistani official. \”The implicit threat – if you don\’t do it, we may have to – was always there,\” he said.

Was the threat only bluster to put pressure on the Pakistani military to fight the Taliban? Or do President Obama\’s national security experts think that American troops can win a war in Pakistan? Either way, the emphasis on \”we\” can only spell disaster.

Washington has threatened Pakistan before, leading General Musharraf to believe that the Pentagon would bomb his country back to the Stone Age if he did not support George W. Bush\’s \”War on Terror.\”

Though Deputy Secretary of State Richard Armitage denied ever making the threat explicit, the menace worked to a point, and the Pakistanis helped American officials get their hands on several terrorist suspects, including Abu Zubaydah and Khalid Sheikh Mohammed.

But the American threat never got Pakistan\’s military to target the Taliban or al-Qaeda in the way that Washington wanted. Nor did Washington get what it wanted with $10 billion in military aid, much of which has disappeared without any proper accounting.

Neither carrot nor stick succeeded, and for a simple reason: The Pakistani military saw our enemies as their allies. Al-Qaeda had helped train Pakistani and Arab jihadis to fight against the country\’s historic rival India, both in disputed Kashmir and within India itself, while the Taliban promised a government in Kabul that was more dependent on Islamabad than on Washington or New Delhi.

This thinking was especially strong within the military\’s Inter-Services Intelligence (ISI), many of whose officers felt an ideological kinship with their fellow Moslems in the Taliban.

The lesson should be obvious. For all Washington\’s threats and promises, Pakistani views of their own interests will determine what they will and will not do. If Obama and his advisers fail to take the lesson to heart, a promising presidency could easily fall victim to a military conflict far more costly and divisive than the war in Vietnam.

President Obama proclaims America\’s national interest in preventing the Pakistani Taliban from getting its hands on the country\’s nuclear weapons, and who could disagree? As Americans, we all have reason to fear that Islamabad\’s nuclear weapons and radioactive material might fall into the hands of jihadis like those who brought down the twin towers.

But, short of bombing Pakistan back to the Stone Age, Washington cannot stop the Pakistani Taliban militarily. Only the Pakistanis can, and we undermine their willingness to do so with our military build-up in neighboring Afghanistan, our drone attacks and commando raids within Pakistan and our threats to fight the Pakistani Taliban ourselves if Islamabad fails to do the job.

Secretary of State Hillary Clinton can similarly lecture the Pakistanis on the threat that the Taliban poses to them, but her hyperbole discredits her case. A few thousand Pashtun tribesmen and their allies are not about to take over the country, even if they are only 60 miles from Islamabad. The Pakistani armed forces are much too strong to allow that to happen. But they will never pursue a consistent, well-thought-out struggle against the Taliban until they see the jihadis as a bigger threat than that posed by India or our own foreign intervention.

As of now, the generals remain unconvinced, seeing the Taliban as a problem the Americans created and continue to nurture with our military intervention in Afghanistan. Hillary Clinton and Richard Holbrooke can argue against this view. But the most the Pakistani military will do is to fight the Taliban with aerial attacks and indiscriminate shelling, as they are doing in Swat and as they have done sporadically over the last few years.

The visible result will be enormous refugee crises, which the Taliban militants knows how to exploit, just as they exploit the country\’s widespread corruption, unjust courts and appalling lack of basic education and other government services.

Less visibly, many officers and soldiers will see Washington pushing them around, lose respect for their leaders and end up siding with the Taliban. The Pakistanis are an intensely nationalistic people, and their nationalism has always been closely entwined with their religious identity and opposition to India. The American military, as outsiders, will only provoke a nationalistic backlash.

What, then, should Obama and his advisers do?

Begin by doing no harm and stop the overheated rhetoric. Stop the no-win war in Afghanistan and the drone attacks in Pakistan.

Work quietly behind the scenes, as Washington did in preventing open conflict between India and Pakistan following the terrorist attack in Mumbai last November. And let Pakistan\’s civilian government take center stage in using foreign aid to build schools and other projects to improve the everyday lives of ordinary Pakistanis.

In other words, a lot less \”we\” and a lot more understanding that America cannot be the answer to Pakistan\’s problems. We can help, but we cannot impose our will without creating far more problems than we solve.