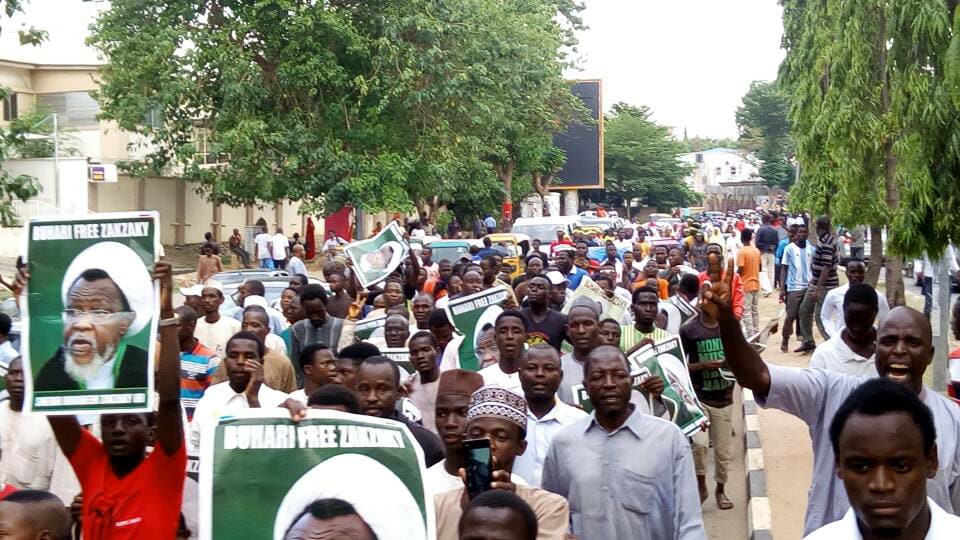 Below please find an update on this week’s daily sit out and regular Free Zakzaky protests in the Nigerian capital Abuja and other cities in the country. Reacting to the last week’s forcible attempt to serve him court summons, Sheikh Zakzaky defiantly insisted that there was no need for the courts to be involved, as, “When they opened fire on us, it was not on the orders of any law court”.

1. CLICK HERE to send an email to the African Union and demand they intervene in this case by writing to the AU Chairperson, a model letter / email is provided below

Model email / letter
If you are emailing, please use the following in the subject line:
Medical Treatment for the Life Threatening Medical Condition of Sheikh Zakzaky

Re: Sheikh Zakzaky
I am writing to ask for your urgent intervention to allow the illegally detained Sheikh Zakzaky and his wife to leave Nigeria for urgent medical treatment due to their critically deteriorating life threatening medical conditions.

Since early this year there are continuous demonstrations in Nigeria demanding immediate medical treatment for the life threatening medical condition of Sheikh Zakzaky and his wife and their immediate release.

I am extremely concerned as Sheikh Zakzaky suffered a stroke in early January and his condition has further deteriorated due to the continued un-lawful detention preventing his medical treatment. He was shot severally more than two years ago, losing his left eye in the process and is currently at great risk of losing the other eye.
I urge your office to play an active role and make known in unconditional terms that the Nigerian Government will be held directly responsible if anything happens to the Sheikh or his wife and due to the seriousness and urgency of the situation I demand that the African Union takes the following actions: 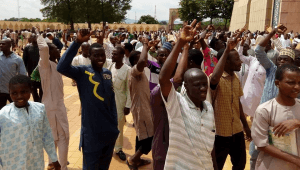 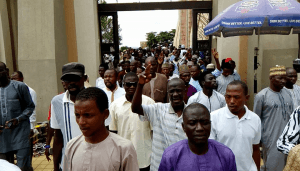 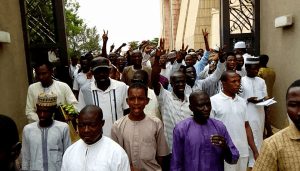 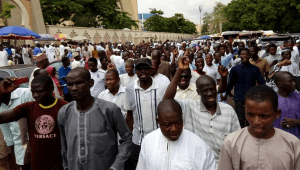 Peaceful protest calling for the freedom for the leader of the Islamic movement in Nigeria, Sheikh Ibraheem Zakzaky was staged  in Victoria Island, Lagos  on Wednesday, the 9th of  May 2018. The protesters, carrying posters and placards, were calling on Buhari Regime to release the Sheikh whose health condition continues to deteriorate.

The protest was terminated at the residence of Senator Bola Ahmad Tinubu. 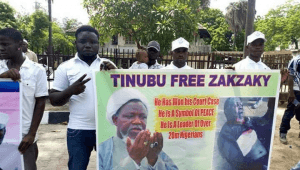 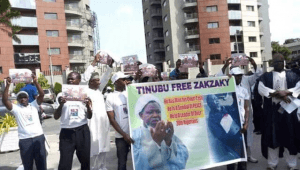 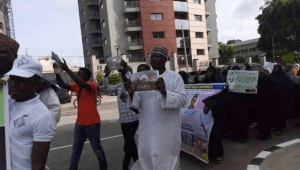 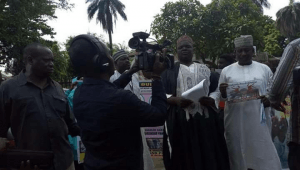 Free Zakzaky Protest in Abuja on Wednesday
09 May 2018
The continued peaceful protests  calling for the freedom of Sheikh Zakzaky was also staged today Wednesday the 9th of May 2018 in Abuja. 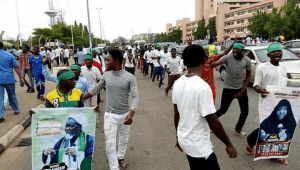 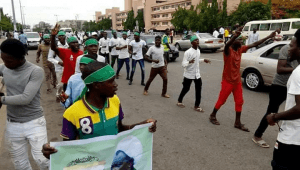 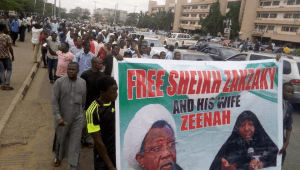 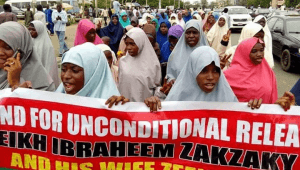 You Used Brute Force To Arrest, Detain Us; Now Use The Same And Do Your Worse! – Sheikh Zakzaky
09 May 2018

Reacting to the attempt to serve him court summon in the case in which the Kaduna state governor, Nasiru El-rufai, charged him and three others to court on the spurious charges including that of culpable homicide punishable by death, the leader of the Islamic Movement in Nigeria, Sheikh Ibraheem Zakzaky has said that they were not charged to court and sentenced before the army used brute force to massacre people.

He observed that the army used brute force without obtaining any court orders. “Therefore, they should similarly use force of guns to take us to court.”

The Sheikh defiantly insisted that there was no need for the courts this time around as well.

Meanwhile, the wife of the Sheikh said they killed her six sons all together and she saw no reason to fear death. She urged them to go ahead and complete the contract they took.

Malama Zeenah is the second accused person in the said case instituted by the Kaduna state government against her husband, herself and two others.

Below is the translated transcript and video of the Sheikh’s explanation, with English subtitled video:

“When they opened fire on us, it was not on the orders of any law court. They only brutally attacked us. Why now go to court seeking for death sentence for us? Why don’t they similarly simply open fire with their guns? What is left?”

Free Zakzaky Protest in Abuja on Tuesday
08 May 2018
A massive free Zakzaky protest was staged in Abuja the federal capital on Tuesday the 8th of May 2018. During the protest security forces were deployed, they however, followed the protesters to the terminating point without any attempt to  attack them. 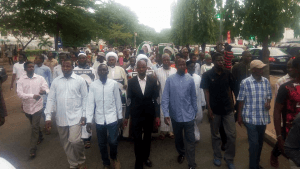 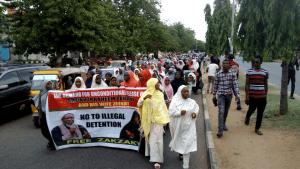 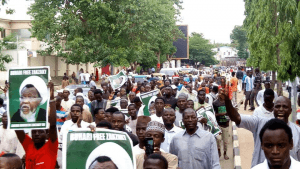 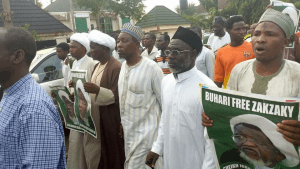 Last week, the Crown Prince of Saudi Arabia, Muhammad Bn Salman also known as MBS during his interview with the American Time Magazine declared that they have succeeded in altering what he termed as; “attempt to over throw government by Al-Zakzaky in Nigeria.”

Radio Deutch Welle Hausa service also reported and there was a clarification by a top member in the house of Saud. They plainly stated how they arrived prevalence due to their efforts towards obliterating Al-Zakzaky errand in Nigeria…

An Abuja magistrate court in Nigeria sitting in Wuse zone 6, Abuja, has yesterday, Monday the 7th May, 2018 dismissed the case against 48 brothers and sisters of the Islamic Movement in Nigeria charged with sundry offences simply because they participated in free Zakzaky processions in Abuja some months ago.

When the case of Commissioner of Police Vs Sani Aliyu & 47 others was called for hearing, all the accused persons were present in court, as were the lawyers standing for them. However, the prosecutors where nowhere to be found. 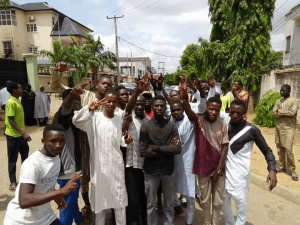 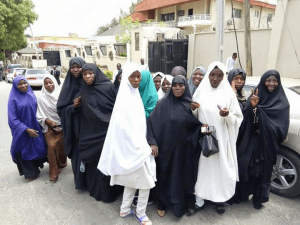 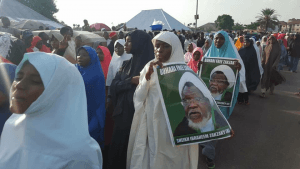 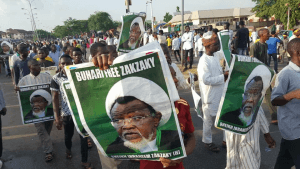 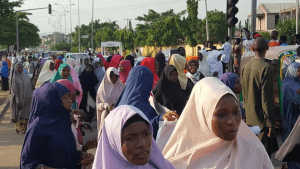 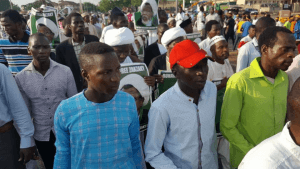