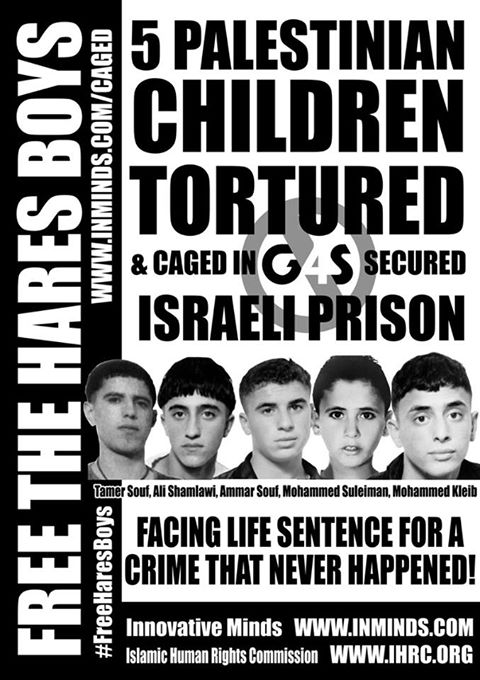 Over the next 10 days we will, inshAllah, see co-ordinated joint protests and events across many countries around the world all in solidarity with the Hares Boys – five Palestinian children tortured and caged in a G4S secured Israeli prison facing life sentence for a crime that never happened! Activists in Argentina, Canada, Chile, France, UK and Uruguay will unite and be the voice of the 5 Palestinian children who have already been languishing in an Israeli dungeon for over 6 moths without a trial.

On 14th March 2013 in what appears to have been a car accident when a illegal Israeli settler car crashed in to the back of an Israeli truck which had stopped to change a flat tire resulting in four people being hurt, was later at the behest of angry settlers presented as an attack by Palestinian stone throwing youth.

The truck drivers earlier testimony that he had stopped due to a flat tire was replaced with the new reason being that he had seen stones by the road, and an accident that nobody saw suddenly became a terror attack with 61 witnesses including the police!

Over the next few days over 50 masked Israeli soldiers with attack dogs stormed the local village of Hares in the early hours of the morning and in waves of violent arrests kidnapped the children of the village. In total 19 children were taken to the infamous G4S secured children’s dungeon at Al Jalame and locked up in solitary confinement for up to 2 weeks in filthy windowless 1m by 2m cells with no mattress. The children were violently tortured and sexual threats were made against the female members of their families in order to coerce confessions from the boys.

With the confessions and the new “eye-witness” statements, five of the Hares boys were charged with 25 counts of attempted murder each, even though there were only four people in the car. Apparently the military court had decided that 25 stones were thrown, each with an “intent to kill”. The five boys – Ali Shamlawi, Mohammed Kleib, Mohammed Mehdi Suleiman, Tamer Souf, and Ammar Souf are currently locked up in another G4S secured facility – Megiddo prison where G4S provides the entire central command room.

The military court will hear the case in October. A study conducted by the Israeli NGO ‘No Legal Frontiers’ over a 12 month period concluded that 100% of Palestinian children brought before the military court are convicted. If the five boys are convicted they will be locked up for over 25 years – five young lives ruined with no evidence of a crime let alone their guilt.

We are demanding the immediate and unconditional release of all the children and hold G4S complicit in Israel’s crimes, particularly in the torture of Palestinian children.

The global solidarity event for the Hares Boys will start in Perpignan, in Southern France with a protest on Saturday 21st September by our friends in the Collectif paix et justice en Palestine.

Then on friday 27th September we will continue with a protest in the UK outside the London headquarters of G4S, and in Cordoba, in Argentina our friends in the Organización de Unión Planetaria will organise an Open Cabildo (peoples assembly) on the plight of the Hares Boys in particular, and all Palestinian prisoners in general. A document will be created from the meeting for the government to push a resolution to censure the Zionist state. In Chile there will be several protests on the same day including in Temuco by our friends at Juventudes Palestinas de Temuco, and in Valdivia by our friends at Juventudes árabes por Palestina. And in France, our friends from CAPJPO – EuroPalestine will lead a protest in Paris.

Then on Monday 30th September in Uruguay our friends in the Comité Palestina Libre and the facebook community “I am Palestinian I am not a terrorist” will protest outside the Israeli Embassy in Montevideo demanding freedom for the Hares Boys. The details of the protests in Chile (at this stage four are being finalised) will be announces shortly as will details of a second protest in Argentina, in Buenos Aires, and a protest in Canada.

More information on upcoming protests can be found here.