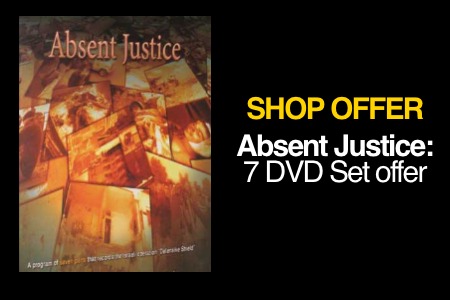 A review of the set from Palestine Internationalist follows.  The review focuses on the events in Jenin and contextualises them with contemporaneous narratives that universalize the event as a seminal moment in the struggle for Palestinian liberation. The reviewer examines the way that the documentary itself is a form of struggle, evidencing the defiance of civilians who have survived, both in their refusal to sit and die and in their acts of witness against their oppressors.

To Sit and Wait for Death

There was a time that we have forgotten, before 9/11. And it was brutal and it was bloody. Its unspeakable cruelty eventuated in the atrocities perpetrated in early March – May 2002 in the West Bank by the Israeli Defense Forces under the guise of ‘Operation Defensive Shield’. It culminated in the destruction of the Jenin Refugee Camp by the IDF, and the betrayal of its inhabitants by the international community. Like Srebrenica, like Samashki, like so many other forgotten atrocities that epitomized the late 20th century.

The documentary Absent Justice, speaks as both witness to these atrocities and accuser to those of us who have found themselves endlessly reacting to events post 9/11 as if the world began that day. This compelling and unavoidably gruesome account covers a two year period, of events in Jenin – perhaps the best remembered of atrocities in that period, but also of Tulkarem, Nablus, Ramallah and Bethlehem, and of course of the start of the Al-Aqsa intifada in Al-Quds Al-Sharif.

Before Jerusalem, however come the opening images of two buffoons, larking around, playing jester to an unimaginably charming yet ultimately sinister king at Camp David in 2000. Thus begins – or so it seems to me – the seven part series, with Ehud Barak and Yasser Arafat seemingly playing tag around Bill Clinton, as the narrator sets the scene of failed negotiations based on ridiculous inequality between parties. As ICAHD’s eponymous report stated, ‘Israel’s most generous offer turns Palestine into prison’. As ICAHD’s chair Jeff Halper states in that report, “Just as prison guards ‘control’ only 5% of a prison (the outer walls, cells, and corridors), so too will Israeli border crossings, settlements, and bypass roads continue to control a Palestinian mini-state.” Operation Defensive Shield proves the point.

Cue scenes of Ariel Sharon’s violation of Masjid Al-Aqsa, the Palestinian response and ensuing Israeli police brutality. Thus begins the intifada, but also the Israeli repression. Cue the unfolding of invasions of five Palestinian cities: Ramallah, Nablus, Tulkarem, Bethlehem and Jenin in 2002, the product of the Sharon election ‘manifesto’ that sought, in the words of its leader, to force the Palestinians to pay the enormity of the price. Cue the sieges of the Church of the Nativity, of the Jenin Refugee Camp, but also of the cities and indeed of the Palestinians. As the resistance bullets run out throughout the narrative of the middle episodes of this series, so the Israeli onslaughts become fiercer. Absent Justice relays in merciless detail the chronology of the cutting of the electricity supply to the Church, the killings by Israeli snipers, some on cranes, of men within the Church grounds, including the elderly bell ringer killed after performing his daily duties. The relaying of dead bodies inside the Church to the Children’s Cemetery, the treatment of the wounded by the nuns also besieged, in the Cave of the Nativity, the warmest place in the otherwise freezing compound.  The killing of Hassan who tried to fix the electricity supply.

Likewise the description of the assault on Jenin, the initial failure of the IDF to penetrate it – the desperation of its commanders, described by Avenery as the shame in their eyes of being beaten by refugees, and the determination evidenced by General Mofaz himself in sending in Apache helicopters and tanks, bombarding the city with bombs and artillery fire so intense as to cover the encroaching bulldozers. After 5 years, we remember that something bad – perhaps unspeakably bad – happened in Jenin, but its ferocity is relived here, if only as a fraction of the real thing, but it is fierce enough.

As Uri Avenery, one of the many Israeli commentators in this series states, they acted as an army not as a police force. The Head of Research at Israeli human rights organization, B’Tselem, Yael Stein, concurs. She adds, throughout, both statistical information, the genesis of accounts of atrocities, including many from serving IDF personnel. Her on-going reprimands regarding the many violations of international laws and norms may fall on deaf ears as far as the IDF and successive Israeli administrations are concerned, but remain a challenge to the viewer. I was reminded of Fuad Nahdi’s prescient description of Muslim anger a year after 9/11 (https://www.ihrc.org.uk/show.php?id=400). On a visit to Jenin in the aftermath of the destruction, he notes that it is:

“…the Muslim ground zero. What has happened here is horrific beyond belief. Yet unlike in New York, there was no international mission to hunt down the perpetrators of this mayhem.

“No condemnation here from George Bush. America continues to give Israel military aid – some of which contributed to this destruction. It is this hypocrisy and double standard that makes Muslims feel frustrated and angry.”

Only it’s not just Muslims who were killed, and it’s not just Muslims who are angry. Nahdi noted correctly that in a saner world-view, both New York and Jenin stand side by side. Instead we frame the reference of the latter in the strange and terrifying world that exists after the former, where those perceived to be ‘Muslim’ are cast as the eternal villain, and even their disabled, their young and their elderly are dehumanized and deemed fit only for destruction. This is not simply the analysis of the rhetoric of Ariel Sharon or his election campaign in 2000 / 2001 as proffered by Avenery in the programme. It is borne witness to again and again by survivors of the sieges, attacks and battles that raged against the Palestinian population in those months. As Absent Justice painstakingly sets out, the current Israeli ‘war on terror’ predates that of the USA, and its methods are ruthless and its targets, undoubtedly civilian. The contributions of Uri Avnery, Yael Stein and Eial Gross from the University of Tel Aviv, highlight the universality of understanding of the oppression of the Palestinians. As Israelis, their evident pain at the events, emphasizes the oft-forgotten fact that the consciousness of the oppressed and of whom they are transcends confessional boundaries. You can attribute that notion to Hegel, Marx or Shariati, it doesn’t matter whence the idea came, this series exemplifies the emotion and the act of solidarity, its underlying call to the viewer is to extract the same from her / him.

Human rights experts from the University of Ireland, Amnesty International, Reporters San Frontiers and Lawyers without Borders elaborate the necessity under the Geneva Conventions for occupying forces to protect the civilian population, witness after witness give accounts of being used as human shields by Israeli soldiers, sometimes approaching resistance fighters with civilians held in front of them, sometimes placing them in front of windows and firing over their shoulders. We hear again and again that as the Israeli onslaught began and later when the bulldozers came in, the repeated claims that no evacuation order was heard from the Israelis, resulting in many people being crushed in their homes. Just as the same experts highlight the illegality and moral repugnancy of killing detainees once they have surrendered or are arrested, we hear eyewitness accounts of executions of resistance fighters and in one case the running over of the dead body with a tank.
Just as a retired army general explains how demolishing a building thought to contain an explosive device in fact renders it more unsafe (the idea that all 800 buildings bulldozed in Jenin by the IDF may have been boobytrapped was in fact offered as justification at one point by IDF apologists), Absent Justice relays the account of Khalid, whose disabled brother Jamal, was left stranded in a corner of their home, his mother standing outside pleading with the IDF soldiers to let her evacuate her son. Khalid tells of how his brother – unable to speak – sat screaming. And all could hear him.

He was crushed to death as his home was flattened above him, in front of his mother.

Describing the beginning of intense artillery fire as the bulldozers moved in, another woman from the camps told of her fear to leave. “It was so intense you felt that all you could do was sit and wait to die.” But she lived. An act of defiance in itself and one that characterizes this programme – the sheer determination to survive to tell.
Whilst watching the DVDs over three sittings, it struck me that whether or not I was writing a review the urge would have overcome me to take notes in every episode. The timeline, the overlay of text from Geneva Conventions, UN Resolutions, human rights reports and the testimony, so much of it, almost demands that it be transcribed again and again as an act of attrition against those guilty of such heinous crimes. Those who have read Ramzy Baroud’s excellent Searching Jenin: Eyewitness Accounts of the Israeli Invasion, some of the stories may be familiar. The sisters caught up in the initial onslaught on Jenin. One killed in an attempt to rescue her injured sibling. Others resonate because their stories are so similar, although they may not have been featured in Baroud’s book.

Other accounts, like those of Anton, Mazen, Rami and Asad besieged in the Church of the Nativity in Bethlehem and Father Amjad Sbara, also holed up with them and some 200 others, bring fresh perspectives on events that have since been spun as the taking hostage of Christian clergy by Palestinian terrorists. It is their voices and those of Maha, Hind, Kamal, Reyad, Mohammad and so on, together with officials – the mayors of the assailed cities, the negotiators in Bethlehem, that not only give this documentary direct credibility but make this series and their witnessing a form of on-going struggle against what has happened to them and what is still happening. This documentary outlines the massive brutality perpetrated against civilians and establishes the case that the civilian population was always the main target of Operation Defensive Shield.

However the story of resistance should not be forgotten. Neither for its heroism, not for its long term significance. Ihsan Aslam’s contemporaneous review of the British press, ‘Jenin: The Battle for the Truth’ quotes Avenery again:

“In the small refugee camp near Jenin, a group of Palestinian fighters from all the organisations gathered for a battle of defence that will be enshrined forever in the hearts of all Arabs… When the international media cannot be kept out any more and the pictures of horror are published, two possible versions may emerge: Jenin as a story of massacre, a second Sabra and Shatila; and Jenin, the Palestinian Stalingrad, a story of immortal heroism. The second will surely prevail.”

As the last episode of Absent Justice details, the international community failed the victims. The UN fact finding mission collapsed, international figures steered well clear of Jenin and the destruction.

Only the voices of brave NGOs and reporters were heard. Absent Justice conveys the suffocating existence of Palestinians at that time. It is however the words of Amnesty International’s military expert David Holly and the ubiquitous Avenery that prevail. No army ever defeated a civilian population. The US failed in Vietnam, the Dutch in Indonesia, the Belgians in the Congo. The question is not if, but when.