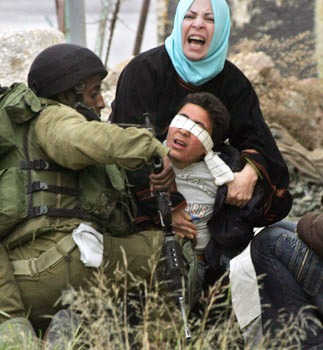 Attend the rally outside the UEFA Annual Congress

Organised by IHRC and Inminds

In recent years, Israel has abducted arrested Palestinian national team players and subjected them to severe torture. Zakaria Issa who was detained in Al Ramla prison, died soon after his release due to medical neglect during his incarceration.

Following Israel’s destruction of the Rafah National Stadium during its merciless and indiscriminate attack on Gaza in 2008-2009, European footballers signed a letter led by Frederic Kanoutédeclaring the holding of the competition in Israel unacceptable.

IHRC, Innovative Minds, MPs, trade unions and activists from all across Europe will be joining forces with the Red Card Israeli Racism campaign in a rally on 24 May 2013 to tell UEFA at its Annual Congress that Israel must not be allowed to host the European Under-21 finals. We will also be handing in a letter to the UEFA President urging him to remove the competition from Israel.

Mahmoud Sarsak, former player for the Palestinian National Football Team, was abducted by Israeli soldiers at a checkpoint, and spent three years in an Israeli prison without charge. He was only released after a 92-day hunger strike and a massive international campaign calling for his release.

Israeli prisons are notorious for their inhumane methods of interrogation, solitary confinement and torture. Palestinian footballer Zakaria Issa, died soon after his release from detention in the Al Ramla prison, due to medical neglect.

In 2008-2009, Israel launched an indiscriminate air raid on Gaza and destroyed the Rafah National Stadium in the process. For these reasons, coupled with Israel’s countless other human rights abuses, the international community have called for UEFA to move their competitions away from Israel and thereby uphold the integrity and racial equality in the sport.

a. Michel Platini, President of the Union of European Football Associations (you can also email his Secretary Marion Haap on marion.haap@uefa.ch)

Re: Israel hosting the 2013 European Under-21 Championship

I am deeply concerned over UEFA’s decision to grant the honour of hosting the 2013 European Under-21 Championship to Israel.Israel has abducted and detained numerous Palestinian football players without charge, severely tortured them, and has destroyed the Rafah National Stadium on three separate occasions between 2008 and 2012.Mr President, Israeli attacks on a nation’s football pitch and violence against children playing football should be considered an attack on all football.

Addressing the XXXVI Ordinary UEFA Congress in Istanbul, you said “Violence, match-fixing, illegal betting, doping, pressures and threats against players, flouting contracts, trafficking of young players, money laundering: these scourges exist. They exist in society and they exist in football. It is up to us to fight them…” I ask you to adhere to your noble words and withdraw the European Under-21 Championship from Israel this year, and thereby put morality back into the game[R1] .

I look forward to hearing back from you regarding the actions you will take on this matter.