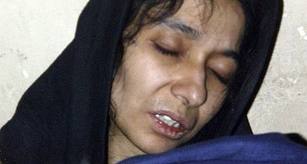 Dr Aafia Siddiqui has been languishing in US custody for several years now. Hers is a depressing tale of how a promising future of an aspiring and intelligent frontrunner is destroyed at the hands of barabaric collaborators under the pretext of the ‘war on terror’. It is a story of indescribable torture, and painful separation from her young children and loved ones that has taken a huge toll on her physical and mental health which continues to deteriorate as days go by. Indeed IHRC hopes that it is the answer to Aafia’s plight and becomes the reason for her release. We need all our campaigners to write to the foreign secretary of their respective countries to call on the UN to intervene in her case.

Pakistani neuroscientist Aafia Siddiqui, along with her three children, disappeared in Karachi in March 2003. Their whereabouts were unknown for the next five years. Throughout this time, Aafia was held without charge and abused whilst in secret detention. Following demands for her recovery by human rights organisations and the Pakistani public, Aafia resurfaced in Afghanistan in August 2008, framed with the attempted murder of US personnel. Transferred to the US, Aafia was convicted in a shocking miscarriage of justice, despite the conflicting testimony of the soldiers and lack of evidence – no gun residue from the rifle, no trace of fingerprints on the rifle, no bullet shells in the room or bullet holes on the walls. Despite the prosecution admitting Aafia was not a member of al-Qaeda or linked to any terrorist group, she was for all intents and purposes, tried as such.  In 2010 she was tried and convicted and sentenced to 86 years in prison.

The case of Dr Aafia Siddiqui is one of the most shocking cases of miscarriage of justice today. This woman has reportedly endured several years of extremely horrendous abuse at the hands of her captors and her nightmare continues to the shock of her angry supporters.

She was an extremely intelligent and gifted woman. She graduated from Massachusetts Institute of Technology on full scholarship and then went onto to do her postgraduate in cognitive neuroscience from Brandeis University. Reports relate that she was an active member of the MSA at university, spreading the teachings of Islam to non-Muslim students. Further, she completed the memorization of the entire Quran at this young age as well. After her marriage, she went on to set up the Institute of Islamic Research and Training with her husband.

Yet her captivity has left her emotionally and physically damaged to the point of an imminent nervous breakdown. Her pictures of before and after detention make one’s heart cry bitter tears; they speak a million words about the appalling and disgusting torment that she must have endured.

On 28 March 2003, she was kidnapped in front of her house along with her three children by secret agents. Aafia was hooded and drugged and separated from her children. Her youngest son, Suleman, was said to have been killed on the spot and is declared as missing. She was then alleged to be transported to a secret location for questioning and handed over to the US authorities a year later.

Aafia was amongst hundreds of ‘suspects’ arrested by Pakistani secret services and handed over to the FBI as part of the ‘War on Terror’ in the wake of the September 11 attacks.

Aafia’s exact location after her abduction cannot be determined due to the secrecy behind her capture. However, we have numerous reports about her horrific torture and rape during her detention. There are also reports that she was forced to make false confessions and sign statements. Further, it is also reported that ‘manuals of explosives and dangerous substances in sealed jars’ were ‘planted on her’ and that she was forced to copy notes from a magazine under the threat that her children would be harmed if she did not comply. She is said to have described her life in detention as ‘living hell’.

By August 2008, Aafia had been reportedly extradited to the US from Afghanistan where she reemerged from disappearance after the US government was probed about her whereabouts by the press and her supporters alike. She was alleged to have shot at US personnel in custody in Afghanistan and was consequently charged and tried in the US for this allegation. Aafia categorically denied shooting at anyone. Statements she made during detention in a state of medication and sleep deprivation, tied down to a hospital bed for several weeks were used by the court as evidence in breach of Miranda laws. There was no mention of her alleged abduction, torture and missing children at the trial. Despite the conflicting testimony of the soldiers and lack of evidence – no gun residue from the rifle, no trace of fingerprints on the rifle, no bullet shells in the room or bullet holes on the walls, she was found guilty on all counts.

She remained detained at the Metropolitan Detention Centre in New York post conviction, where she was reportedly subjected to humiliating strip searches, ‘prompting her to refuse legal visits on many occasions’. On 23 September 2010 Aafia was sentenced to 86 years in prison on 5 counts. She is currently held at Federal Medical Centre in Carswell, Texas, which caters to female inmates with special medical and mental health needs. She has been refused contact with her family and is not permitted  any letters, phone calls or reading materials for the sake of ‘national security’.

Her elder two children have been returned to her family in Pakistan; however, the whereabouts of her youngest one is still unknown and he is feared to have been killed during the kidnapping.

The trauma that this woman has endured since her seizure is so horrific it seems unreal. We pray her Lord compensates her in this life and the next for this humongous dishonor and grants her release so that she can be reunited with her children and family. Ameen

IHRC urgently requests all campaigners to write to the foreign secretary of their respective countries and urge them to make strong efforts to raise Aafia’s case in the UN for her immediate release from US detention and return to Pakistan to be reunited with her children and family.

For up-to-date information about her trial please visit http://www.justiceforaafia.org/

[Name of Foreign Secretary of Your Country]

For UK campaigners, please find address of Foreign Secretary below:

Re: Call on the UN for immediate repatriation of Dr Aafia Siddiqui

I am writing to you with extreme concern about the unjust detention, horrific torture and flawed trial of Dr Aafia Siddiqui, a neuroscientist, MIT graduate and mother of three who was abducted on March 2003 outside her home in Pakistan along with her children under suspicion of terrorism. Aafia has categorically denied all charges against her and there is no evidence to date against her. I strongly urge you to raise this case of outrageous human rights abuse at the UN and demand her immediate repatriation to Pakistan.

Words cannot describe what my heart feels while I write this letter to you. Dr Aafia Siddiqui is (or should I say was?) an extremely intelligent and gifted lady who once had aspirations for a beautiful life like all of us. But all her dreams were destroyed.

After her disappearance, Aafia was reportedly kept in secret prisons for several years. Her children were seized from her at the time of abduction and detained separately. She has described her life in prison as a ‘living hell’. Her family members have revealed reports about reported violent abuse against her in detention. They state that she was forcefully stripped and cruelly raped multiple times; she was inflicted with several forms of torture including being beating with hands and feet tied down, being beaten with rifle butts, being dragged by her hair, being beaten to the point of unconsciousness and being injected with unknown substances; she was forced to strip and walk on the Quran – a crime so horrendous for a Muslim for whom the Quran is dearer than his/her own life; she was also mercilessly separated from her children and threatened with horrific warnings that her children would be harmed if she refused to cooperate with her captors. She was allegedly forced to confess to charges she did not commit and forced to write and sign documents. In 2008, she was charged for shooting at US personnel in custody in Afghanistan. No evidence to date has been found to prove these charges and Aafia has denied all accusations against her. Regardless, in a shocking miscarriage of justice she was convicted for assaulting US officers and sentenced to 86 years in prison on 23 September 2010. Statements she made during detention in a state of medication and sleep deprivation, tied down to a hospital bed for several weeks were used by the court as evidence in breach of Miranda laws. There was no mention of her alleged abduction, torture and missing children at the trial.

Two of her elder children have been returned to their family in Pakistan but the third is feared dead and was allegedly murdered on the spot at the time of the kidnapping.

Aafia is currently held at the Federal Medical Centre in Carswell, Texas and is not permitted to write letters or make phone calls or meet her children and family members in the interests of ‘national security.’

It is extremely depressing for me to hear reports that her mental and physical health have deteriorated considerably. Her numerous pictures of before and after detention, uploaded on the internet, speak loudly about her painful transition from a bright-faced, ambitious girl to a frail, old-looking woman on the point of collapse.

Such horrific stories of her abuse can only lead the listener to extreme anger at the apparent incapacity and heartlessness of world leaders who are oblivious to her plight. I sincerely hope that you are not one of them. I hope that your humanity moves you to use your authority and position as a foreign secretary of a powerful state, to raise this case in the UN with wisdom and firmness to demand her immediate release from her unjust detention.

Please take urgent action on my letter as I truly fear for Aafia’s life in detention. As days go by the damage to her mental and physical health increases. Therefore, please do not delay taking action on this letter. I would strongly urge you to lobby this case in the UN and be the first and foremost in taking action against this blatant and horrific case of human rights abuse. Please pressurize them to campaign for Aafia’s immediate release and return to Pakistan so that she can be reunited with her children and loved ones.

I await good news from you in the future.