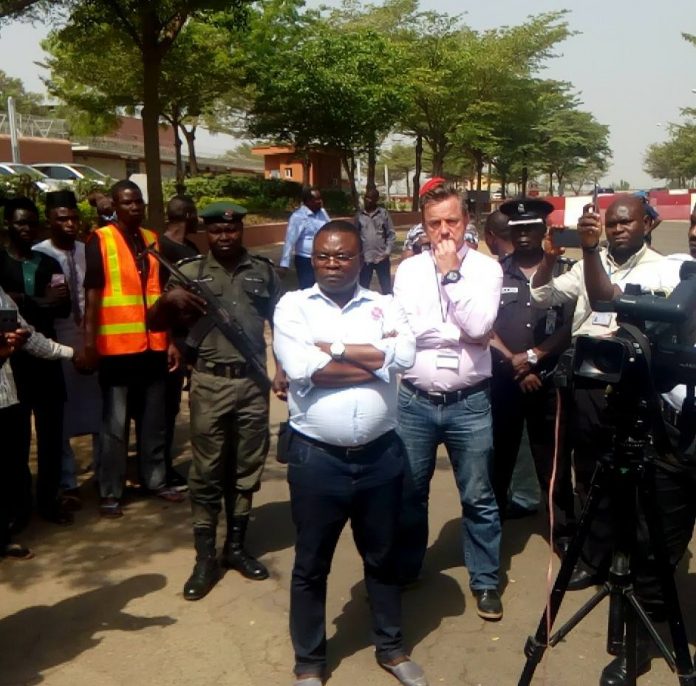 Below please find an update on the continuous Free Zakzaky protests. During this week massive protests were organised in front of UN, EU and US Embassy buildings in the Nigerian capital Abuja.

Multitude of brothers and sisters in the city of Kaduna on Friday 11/01/2018, staged fresh peaceful protest in the city heart of the state, calling for the immediate and unconditional release of leader of the Islamic Movement in Nigeria, Sheikh Ibraheem Zakzaky, his wife and several other faithful followers in illegal detention for over 3 years.

The protest kicked off in afternoon around 2:30p.m. in Leventis round about, along Ahmadu Bello way, Kaduna.
The protesters as usual, marched chanting different slogans reiterating their demand for the freedom of their leader who had been in illegal detention for over 3 years despite a federal court ruling since December 2nd, 2016, where the court had finally ruled that, the Sheikh should be released within 45 days after acquitting him of any crime.

Peaceful Free Zakzaky protesters reached European Union Building in Abuja on Thursday the 10th of January 2018 and presented a statement calling for the immediate release of Sheikh Zakzaky. In a paper signed by Enr Abdullahi M. Musa the protesters  expressed displeasure over silence of EU and other organisations on the killings of hundreds of Sheikh Zakzak’s followers.

It reads  “While marking one year of Daily-Free-Zakzaky protest in Abuja, I want to remind the public about Zaria massacre and unlawful detention of Sheikh Ibraheem Zakzaky (H) and his wife as well as to express our sadness concerning the silence of the European Union on the matter.

“I am to further remind the public and the EU Ambassador to Nigeria, who is the Head of EU Delegation to Nigeria and ECOWAS that following the unfortunate massacre of brothers and sisters of the Islamic Movement under the leadership of his Eminence Sheikh Ibraheem Zakzaky (H), unlawful detention of Shaikh Ibraheem Zakzaky (H), arrest of hundreds of other brothers and sisters, destruction of properties, perpetrated by the Nigerian Army in Zaria, the only response we received from the Buhari-led administration is reckless killing of Free-Zakzaky protesters.

Activities marking one year commemoration of the Martyrdom of Sheikh Qasim Umar Sokoto took place in Sokoto on Wednesday the 9th of January 2018. activities include special prayers, procession and visit to his graveyard.

Free Zakzaky Protest in front of US Embassy in Abuja
08 January 2019
Massive Free Zakzaky Protest in Abuja on Tuesday the 8th of January 2019. The protest terminated in front of American Embassy building in Abuja.
The grave atrocities committed by the Nigerian Army during December 2015 Zaria massacre led to hundreds of children being orphaned; many husbands and wives widowed and scores of Sheikh Zakzaky’s disciples are still languishing in prisons with life-threatening gunshot wounds.

Free Zakzaky Massive Protest n Abuja on Monday
07 January 2019
Youth arranged a massive Free Zakzaky Protest in Abuja on Monday the 7th of January 2019.
Sheikh Zakzaky has been in illegal detention for more than three years now, in spite of his deteriorating health conditions without proper medical treatment and despite the fact that a Federal High Court sitting in Abuja has ordered for his immediate and unconditional release since December 2, 2016.

July 1998: IHRC called on Nigerian regime of General Abubakr Salamu to release Mu’allim Ibrahim Al-Zakzaky, the leader of Nigeria’s Islamic opposition, and all political prisoners from the Muslim Brotherhood, Click Here to read the details.