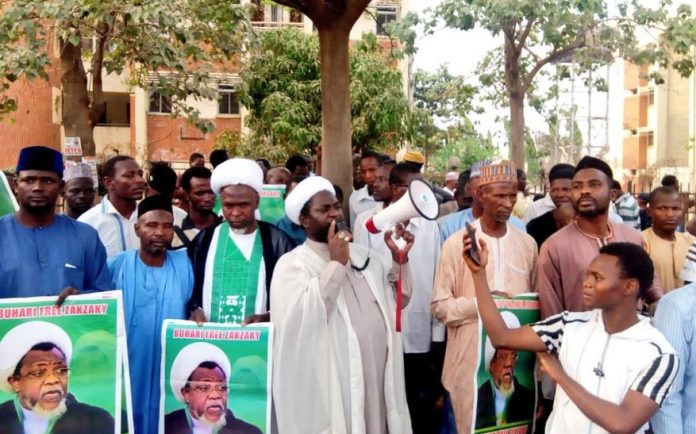 Below please find an update on the continuous Free Zakzaky protests. IHRC welcomed the Kaduna court orders to allow Sheikh Zakzaky medical treatment from experts of his choice but the Nigerian authorities have earlier disobeyed higher Federal court orders to release him.

2. CLICK HERE to send an email to the Commonwealth and demand their intervention in this case, a model letter and contact details of the Commonwealth are also provided below. Please forward any response you receive to IHRC on wajahat@ihrc.org.

#FreeZakzaky Protest in Abuja on Wednesday
30 January 2019
Daily #FreeZakzaky protest was staged at Asokoro district of Abuja. Hundreds graced the nonstop call for the immediate release of Sheikh Ibraheem Zakzaky.

FreeZakzaky Protest in Abuja on Monday
28 January 2019
Daily #FreeZakzaky protest staged at Garki area of Abuja, in fresh call for immediate release of Sheikh Ibraheem Zakzaky and his wife.

Sheikh Zakzaky lost sight in one eye and the use of one arm in the December 2015 massacre by the Nigerian military of over 1000 followers of the Islamic Movement of Nigeria. He also suffered a stroke at the turn of 2018. The authorities have consistently prevented him from accessing his own medical treatment and have refused requests for him to fly abroad. Click here to read the Press Release.

Today the Kaduna state High court has granted the plea by the legal team of the Islamic Movement in Nigeria, led by Barrister Femi Falana SAN that both Sheikh Zakzaky and his wife be allowed to seek medical care from experts of their choice within or outside as the state has been incapable of providing them with the care their ailing health condition demands.

The court had earlier in November 2018 denied bail to the Defendants despite their visible ill health. However, at the hearing today, the Counsel for the Defendants Mr Femi Falana SAN, after highlighting the bad health conditions of the Defendants made a fresh application for the court to make an order for them to be flown abroad for medical treatment.

In response, the Director of Public Prosecution (DPP), Mr Bayero Dari, who led the counsel for the State objected to the application and informed the court that they had earlier flown the Defendants abroad for treatment.

A Little drama ensued when the State Counsel was challenged by Sheikh Zakzaky to furnish the court with facts as to where and when he was flown to for treatment since they were severally shot by the Nigerian Army.

The Sheikh adviced the Counsel to fear Allah and respect himself and to refrain from telling lies to the face of a Court of Law. Mr Dari had wanted to misinform the court that the state was taking good care of the duo and that they were even flown abroad for treatment. Click here to read the full details.

Many of the followers of Sheikh Zakzaky were captured alive and tortured to death during attack on ArbaeenTrek 2018, watch a video clip of Nigerian Army capturing peaceful participants of Abuja ArbaeenTrek 2018.