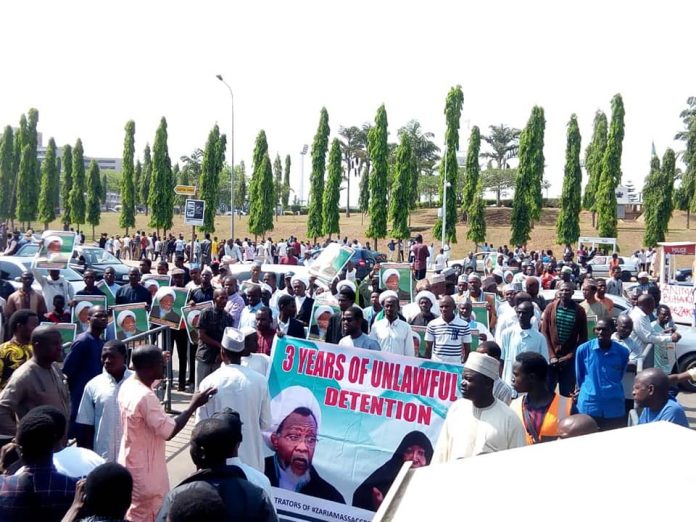 Below please find an update on the continuous Free Zakzaky protests in Nigeria. During this week protests and rallies were held in the Nigerian capital Abuja to mark the third anniversary of the infamous Zaria massacre of 12 December 2015.

2. CLICK HEREto send an email to the Commonwealth and demand their intervention in this case, a model letter and contact details of the Commonwealth are also provided below. Please forward any response you receive to IHRC on wajahat@ihrc.org.

On 02 December 2016, the Federal High Court in Abuja ruled that Sheikh Zakzaky and Muallimah Zeenah should be released within 45 days. The court described their detention, which began in December 2015 as illegal and unconstitutional. The deadline for the court order expired on 16 January 2017 but the Nigerian Government has refused to obey the court order. The Nigerian government has kept them detained illegally for over three years now and Sheikh Zakzaky and his wife still remain in the custody of the state, in clear contempt of the court order. The Commonwealth’s silence on this issue is putting more innocent lives at risk. Recently Nigerian authorities have killed over 60 peaceful FreeZakzaky protesters, and arrested, tortured, and injured hundreds of them with live bullets in a barbaric attack on ArbaeenTrek 2018.

Massive Free Zakzaky Rally was organised at National Assembly in Abuja on Thursday the 13th of December 2018 to protest the third anniversary of Zaria massacre and the illegal detention of the leader of Islamic Movement Sheikh Ibraheem Zakzaky.

Victim of Army Atrocites in Abuja, whose arm was amputated also participated in the daily free Zakzaky protest in Abuja, The Monday the 10th December protest has witnessed enormous youth participation including the lady whose hand was amputated as a result of shot with a live bullet on her arm.

This is the service of  Nigerian Army/Police led her to be amputee in a country called Nigeria where lives are not valued. She was shot with RPG by the security forces of her country during peaceful Arba’een Symbolic Trek in Abuja on 29 October, 2018. Her limb was later removed in Hospital to save her life.

This is the work of those swore to protect our life and property.

Are we save in this country? If someone can complain because of inflation in the country, what would he say regarding those who are been persecuted since from the inception of the administration to date?  Brothers and Sisters are also the citizens of this country who love the state more than those in the helm of our affairs.

“To the Nigerian army and police, if you kill us, you kill your brothers and sisters. If you kill me personally, you also kill your brother, Our struggle is a struggle to the path of justice and truth. No amount of barrels of guns can suppress us. The truth always prevail at last.” says one of the protesters.