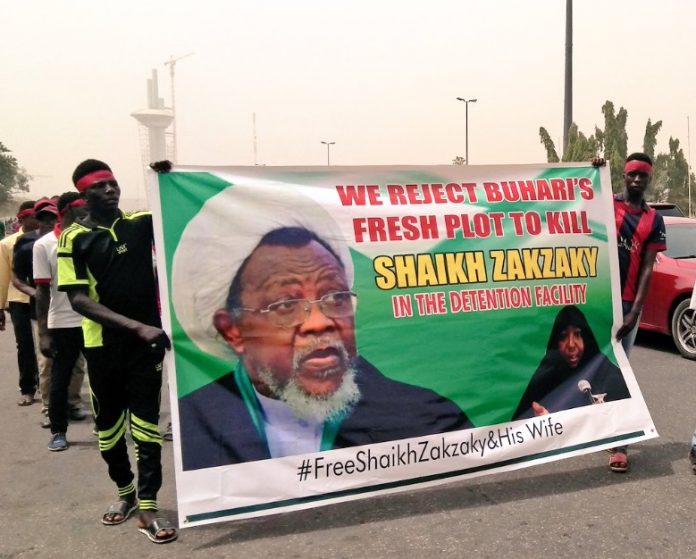 Below please find an update on the continuous Free Zakzaky protests. This week demonstrators protested a potential government plot to assassinate Sheikh Zakzaky in detention during this year’s Nigerian elections.

We request campaigners keep the pressure on the Commonwealth by writing emails/letters, demanding the immediate release of the Sheikh and all those unjustly imprisoned. Please forward any responses you receive to us and keep the pressure up by continuing to send follow-ups. A model letter is provided below in the Action Alert.

1. CLICK HERE to learn the five things you can do to support the Islamic Movement of Nigeria. You can donate to support the medical expenses of those recently injured by clicking here.

2. CLICK HERE to send an email to the Commonwealth and demand their intervention in this case. A model letter and contact details of the Commonwealth are provided below. Please forward any responses you receive to IHRC at wajahat@ihrc.org.

We have observed series of hate campaigns against the Islamic Movement in Nigeria being aired by an Abuja-based FM radio station, Vision FM, in collaboration with some FM radio stations in some selected states. This has gone on in the past week under the guise of airing a documentary by some so-called Shia scholars.

The apparent sole purpose of the documentary is to label the Islamic Movement in Nigeria and its leader, Sheikh Ibraheem Zakzaky, as terrorists who are not true Muslims. Such mischievous hate campaigns are potentially inciting, capable of instigating a large section of the public to carry out mass attacks and genocide against members of the Movement in the aftermath of the upcoming general elections.

Free Zakzaky Protest in Area 1 Garki Abuja calling for the unconditional release of Sheikh Zakzaky. Protesters warned that, should there be any attack on the leader and other followers as planned by the administration of Buhari during this week’s election, the National Security Adviser, NSA, the person of Mr. Mohammed Babagana Mongono and his principal would be held responsible.

Nigerian Army Attack ArbaeenTrek 2016
Published on 15 November 2016
The Nigerian state launched a bloody crackdown on the ArbaeenTrek 2016. The procession was one of many strands from all over the country making their way to Zaria where they join the main procession which in previous years has been attended by several million people. Tear gas was also fired at the marchers by soldiers who blocked the road seeking to stop the procession from proceeding to its destination. Eye-witnesses reported that the procession was set upon by soldiers at three different locations.