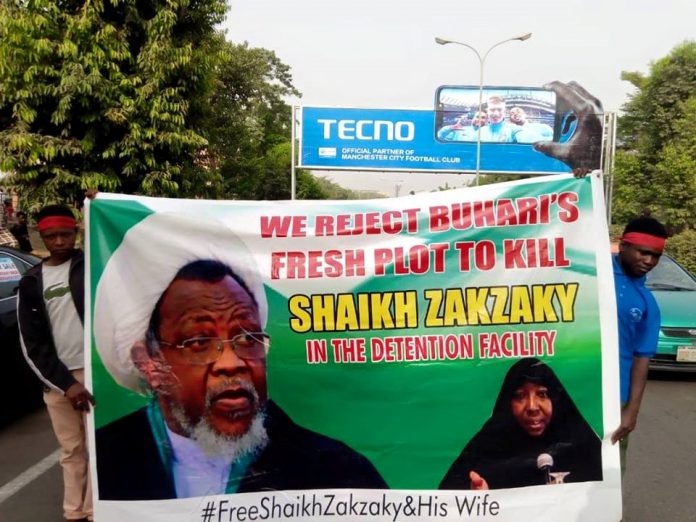 We request campaigners keep the pressure on the African Union by writing emails/letters, demanding the immediate release of the Sheikh and all those unjustly imprisoned. Please forward any responses you receive to us and keep the pressure up by continuing to send follow-ups. A model letter is provided below in the Action Alert.

Details of the leaked letter can be found here.

Buhari must understand that there are no such comparisons to be made.  Many observers fear an attempt to provoke some sort of ‘unilateral’ action against Zakzaky by a ‘rogue’ member of the security apparatus to enact the scenario leaked earlier this month to assassinate Zakzaky during the election period is heralded by today’s news stories.  If anything, many see this attempt and media campaign as sideshow to distract from the likelihood of a Buhari defeat.  Murder to justify defeat is a low even for Buhari but really that does seem to be the desperation he reeks of.
Click here to read the Arzu Merali’s blog.

The daily peaceful protest calling for the immediate and unconditional release of Sheikh Ibraheem Zakzaky, leader of the Islamic Movement in Nigeria was staged today Wednesday the  20/2/2019, staged earlier in the city of Abuja, federal capital territory, by thousands of brothers and sisters.

The protest marched peacefully chanting slogans for the demand of immediate release of the leader, his wife and several others in illegal detention.

It would be recalled that, Sheikh Ibraheem Zakzaky had been in illegal detention for more than 3 years now, after Nigerian Army attack on Sheikh Zakzaky’s house and Hussainiyyah, centre for religious gathering of the Movement, killed more than 1000 innocent members, buried more than 360 corpses in  one grave to cover their unforgettable atrocity.

Massive peaceful protest demanding the immediate and unconditional release of Sheikh Ibraheem Zakzaky, leader of the Islamic Movement in Nigeria continues today Monday 18/2/2019, by multitudes of members of the Movement.

Sheikh Zakzaky spent over 3 years in illegal detention in contempt of court order that had since ordered his release since December 2016, by tyrant Nigeria authorities have refused to obey the order.