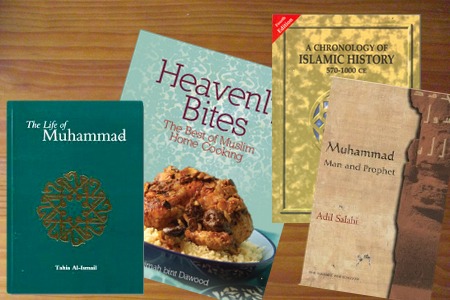 We have a selection of new books that have just arrived at the IHRC bookshop. You can have a look at them below

Heavenly Bites is the first multinational Muslim cookbook that features the best of Muslim cooking to be found from Morocco to Bangladesh, served up by Karimah Bint Dawood, the TV presenter and cook and convert to Islam.

The Prophet Muhammad initiated one of the most significant religious and cultural developments in human history, bringing into the world the religion of Islam in its final form. His life continues to inspire millions and millions of people around the world.

The Life of Muhammad by Tahia Ismail

The final renewal of the Prophetic tradition was the function of the last Prophet and Messenger Muhammad (Peace be upon him), and it is in this perspective of constantly renewed Divine guidance that we must view the story of Muhammad’s (Peace be upon him) life

The Safar Curriculum for Home-schooling: An Introduction