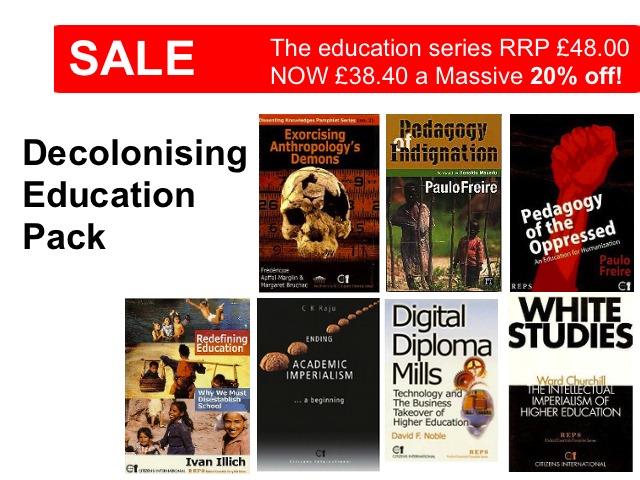 Get yourself engrossed in deconstructing modern schooling and reconstructing ways of learning and education that is dedicated to liberation both socially and politically. We have compiled a variety of pamphlets and books in order for us to educate ourselves about the harm we are doing by following the cliché.

This ‘Decolonising Education’ pack includes 9 essays from various authors including Paulo Freire, Ivan Illich, Naquib al Attas, Ward Churchill, C.K Raju. Titles include Pedagogy of the Oppressed, Pedagogy of Indignation, Academic Imperialism…a beginning, The De-Westernization of Knowledge, Re-defining Education and more. Also included in the pack is ‘Decolonising the University The Emerging Quest for Non-Eurocentric Paradigms’ which is a compilation of work by various academics and writers as well as including a few papers from the ‘International Conference on Decolonising the Universities’ in Malaysia, 2011.

Don’t miss out on this great offer and start ordering now!

Titles included in the pack:

All the profit made from purchases goes towards the IHRC Trust No. 1106120.