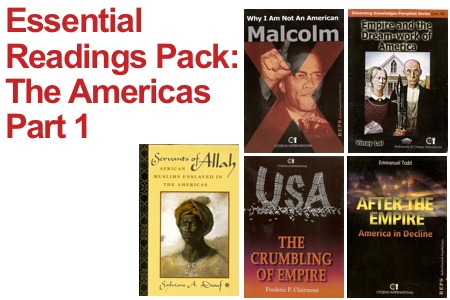 Looking for some key texts on US supremacism, its history and current crises and the dangers it poses for the rest of the world?  IHRC Bookshop has put together a pack of key readings from Malcolm X. Sylviane A. Diouf, Vinay Lal, Emmanuel Todd and Frederic F. Clairmont.

This pack includes a book and essays on the issues of the enslavement of African Muslims, the USA as an extraordinary Empire, the predicted decline of America and the current economic crisis.  Additionally, we have short pamphlet from Malcolm X, entitled ‘Why I am not an American’.  The titles are:

All profits from the sale of items in the shop go to the IHRCT, a charity registered in the UK number 1106120.