Welcome to the Nigeria Digest. In this issue you will find an overview of the last week’s events, including protests in Kaduna, Sokoto, Azare, Yola, Kano, Shinkafi and Katsina. Nigerian Police and security services attacked peaceful protesters in Kaduna and Sokoto.

As Ashra-e-Zainabiya and the Arbaeen approaches, we urge you to campaign with the African Union. as this is a time that the Nigerian regime has often clamped down on the Islamic Movement in Nigeria, often using a sectarian narrative to justify their actions. In anticipation of this please also circulate Nusaibah El-Zakzaky’s letter on the Islamic Movement as widely as you can.

1. Write to the African Commission on Human and Peoples’ Rights and demand they intervene in this case and also highlight the possible additional crackdowns on the movement given the time of Arbaeen approaches. A model letter can be found below for your assistance.

I am writing to you to ask for your urgent intervention to help halt the continuing persecution of the Islamic Movement of Nigeria by state authorities, especially; I am really concerned that there will be further crackdowns by the Nigerian army and or government on the Islamic Movement in the coming weeks as Ashra-e-Zainabiya and the Arbaeen approaching. Unscrupulous members of the army and government have previously used a deeply sectarian and divisive narrative to justify violent actions, including shooting at religious worshipers and or protesters on demonstrations, curtailment of religious services and various violations. In some previous instances, sectarian rhetoric from institutions linked to the government and army have incited mob attacks on IMN members.

IMN organised a large peaceful Protest in front of Ministry of Justice in Abuja on Wednesday 25th October 2017. 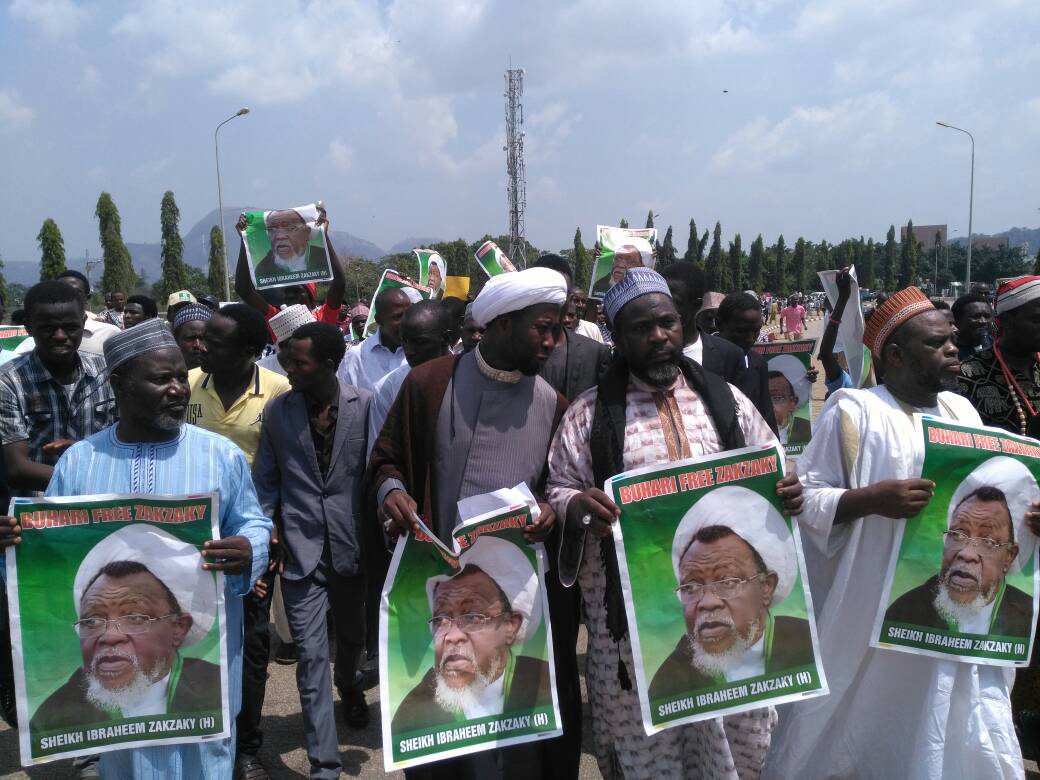 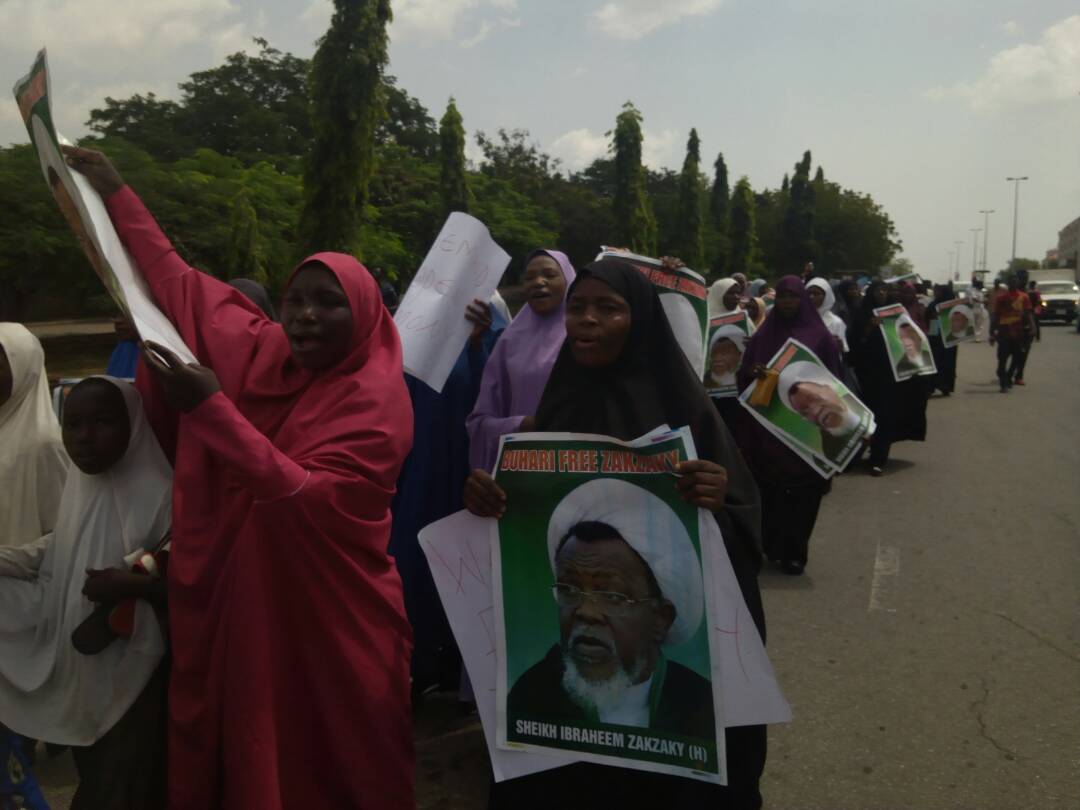 Last Sunday (22/10/17), peaceful Free Zakzaky processions were held in major towns and cities across Northern states calling on the Buhari administration to comply with the nearly one-year old federal high court ruling on the release of Sheikh Ibraheem Zakzaky from illegal detention. Processions ended peacefully except in Kaduna and Sokoto where armed policemen attacked the peaceful marches.

In Kaduna metropolis, a contingent of well armed policemen was drafted to the scene of the peaceful protest along the busy Ahmadu Bello way and opened fire on the unarmed protesters using live bullets and teargas. Luckily, there was no loss of life reported but dozens sustained injuries of varying degrees of severity.

The same scenario was played out in Sokoto, where the security men arrived after the peaceful protest has ended and participants were already leaving the scene of termination of the procession. Nevertheless, the policemen were bent on attacking. They proceeded to the Center of the Islamic Movement in Nigeria, carted away motorcycles left behind by some of the protesters and also made some arrests…

On Sunday the 22/10/2017, thousands of brothers and sisters of the Islamic Movement in Nigeria, Kaduna zone, marched peaceful free Sheikh Zakzaky protest calling for unconditional release of leader of the Movement, Sheikh Ibraheem Zakzaky.

The protest kicked off at about 3:00p.m. at Leventis roundabout, Along Ahmadu Bello Way, Kaduna. It marched through the Ahmadu Bello Way to Kano Road by Ibraheem Taiwo Road, the city heart of Kaduna.
Prior to closing juncture, at fire service junction, Armed Mobile Police attacked the peaceful procession with teargas. A report says four people have arrested two of them are females. 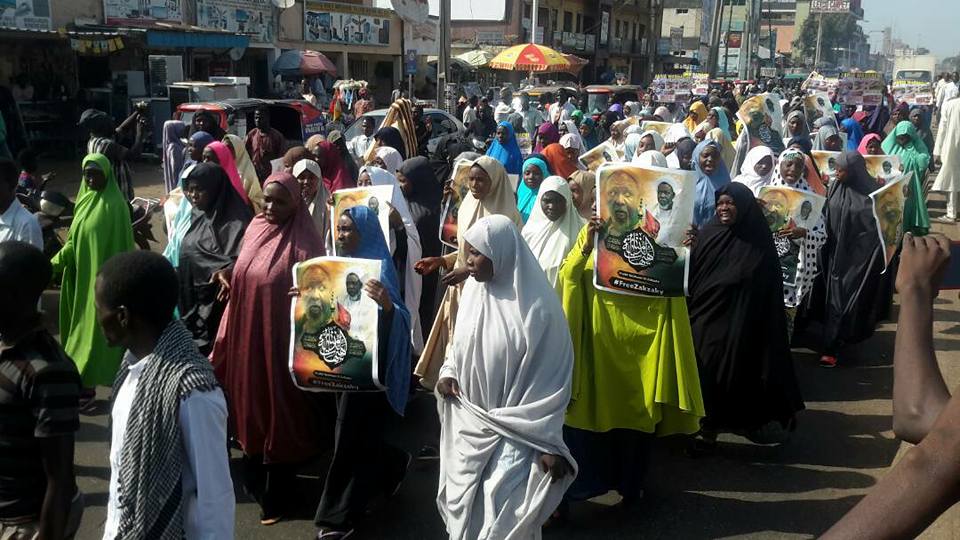 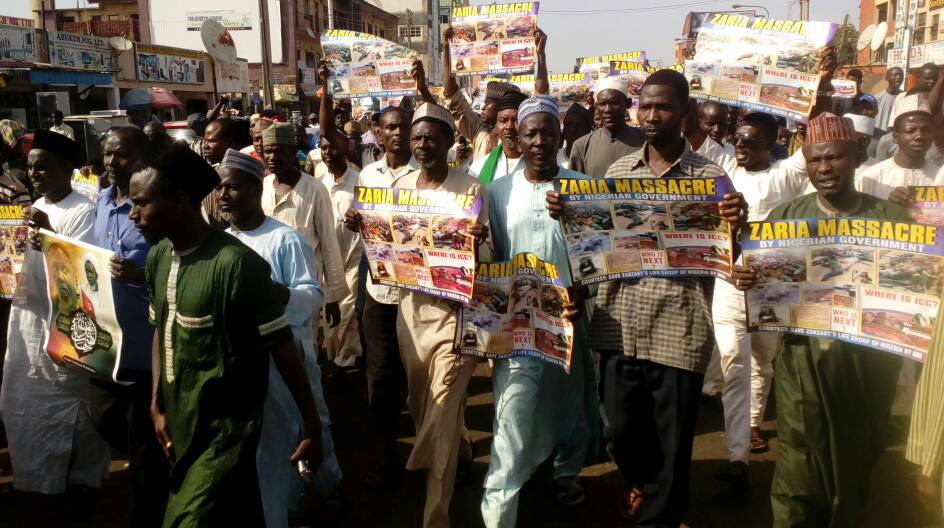 Free Zakzaky protest in Sokoto on SUnday the 22nd of Oct 2017 ended peacefully. However, security operatives teargassed the gathering after a clsoing speech by Sheikh Qasim Umar. The protests took place peacefully in many towns in sokoto state which include: Illela, Gada , Gwadabawa, Kware, Bodinga, Gwaranyo, Isa and Tangaza 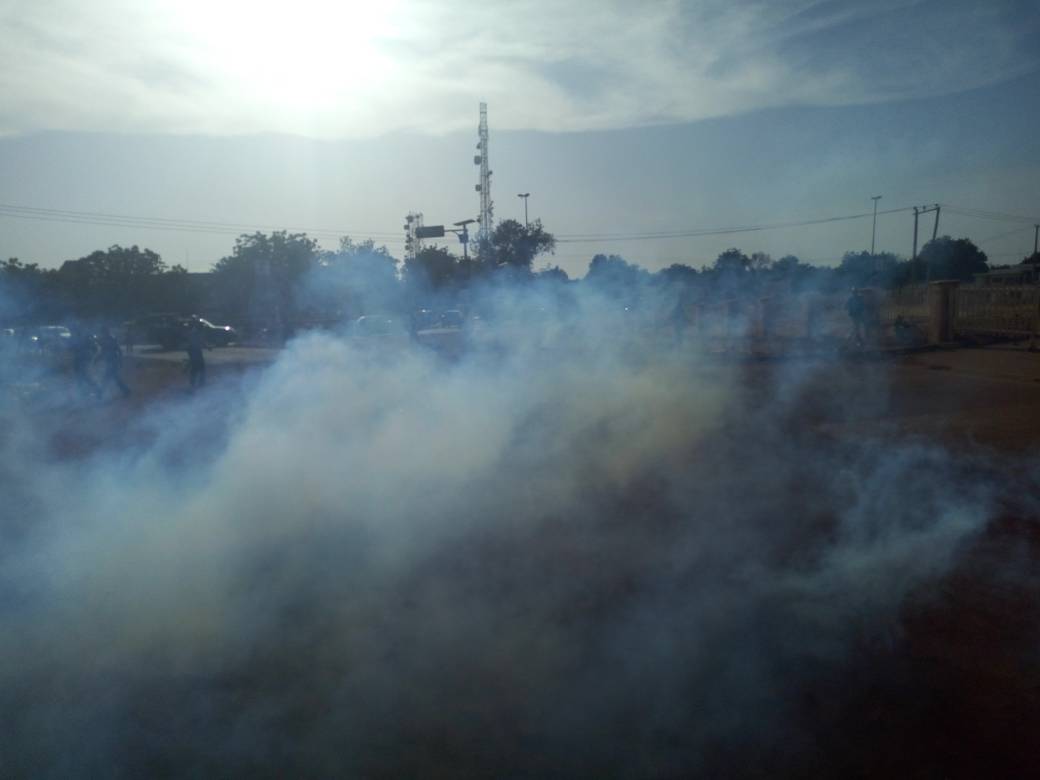 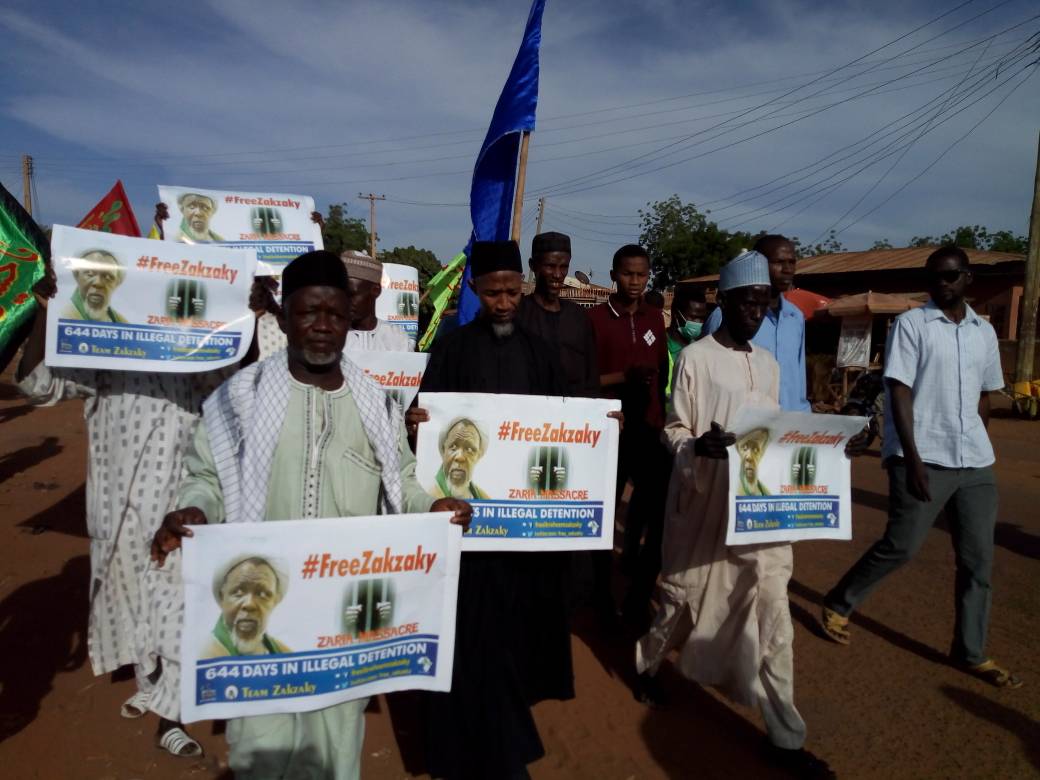 A large number of Women, Men and Children participated in Free Zakzaky protests in Azare and Yola on Sunday 22 October 2017. 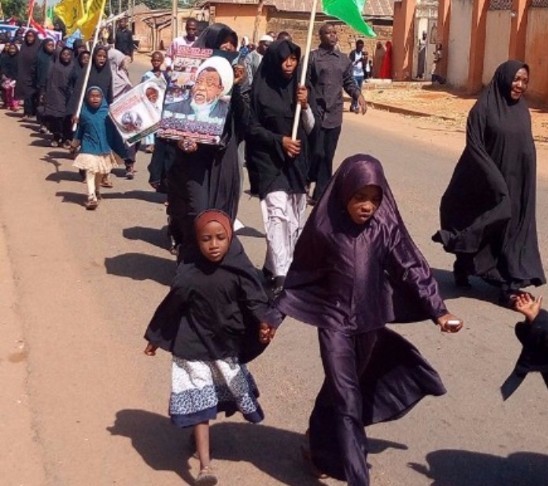 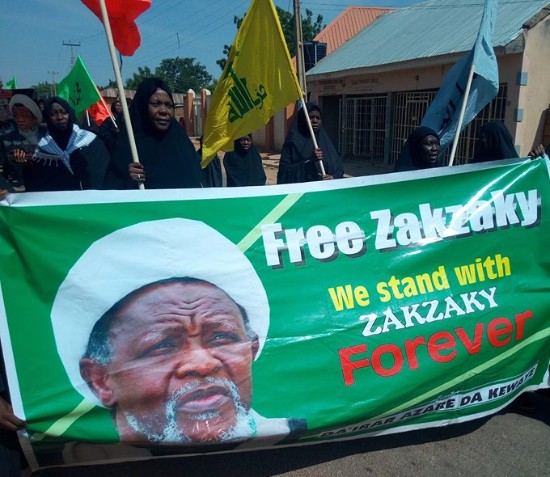 Free Sheikh Zakzaky protest in Kano on Sunday the 22nd of Oct 2017. 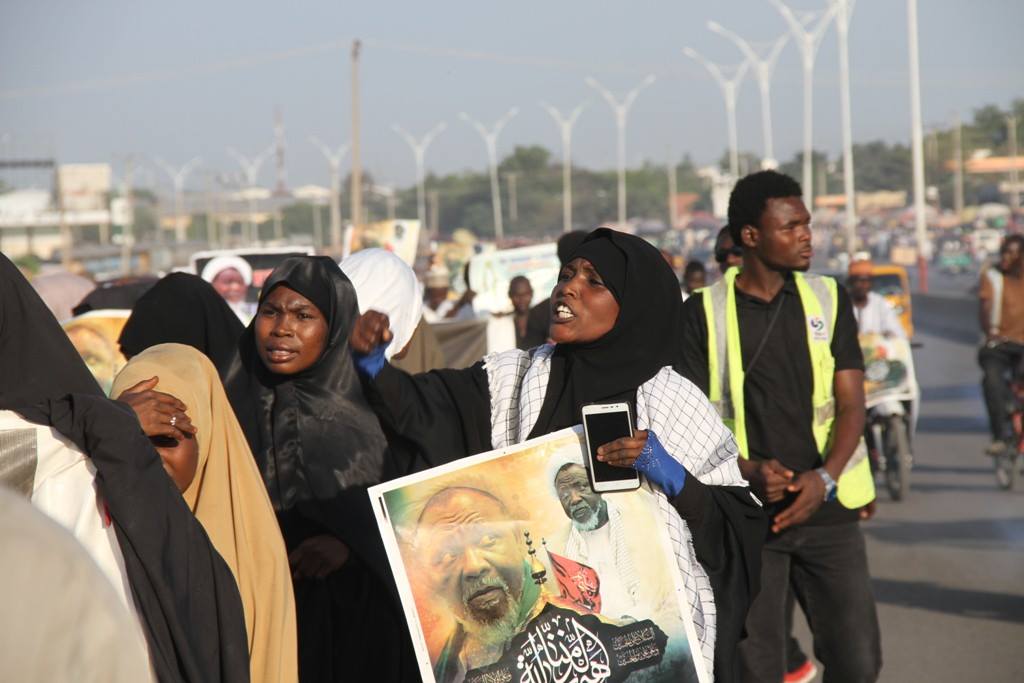 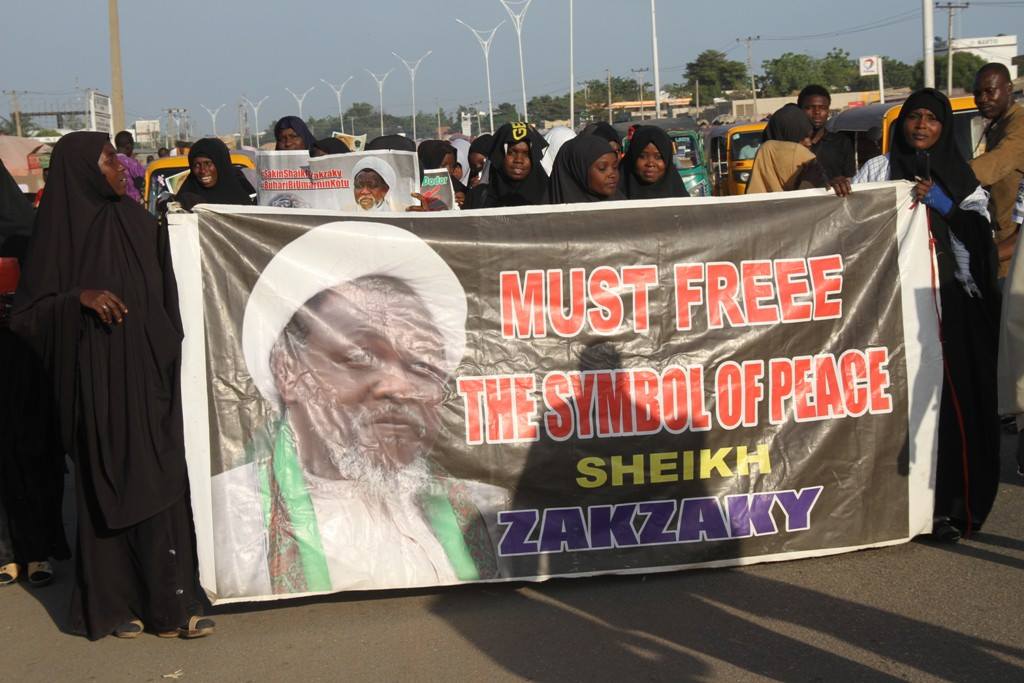 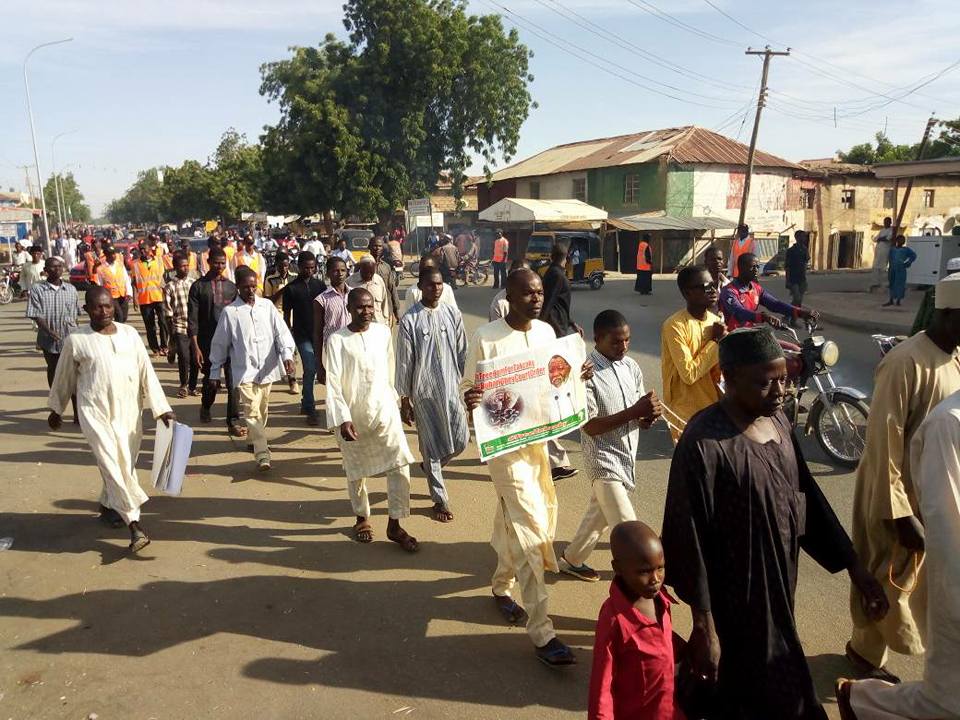 Speaking to OAK TV in Abuja, Mrs Maimuna Bintu Hussein, one of the protesters accused the federal government of turning a blind eye to the laws of the land thus subjecting the cleric to unending torture despite the court’s order to effect his release. 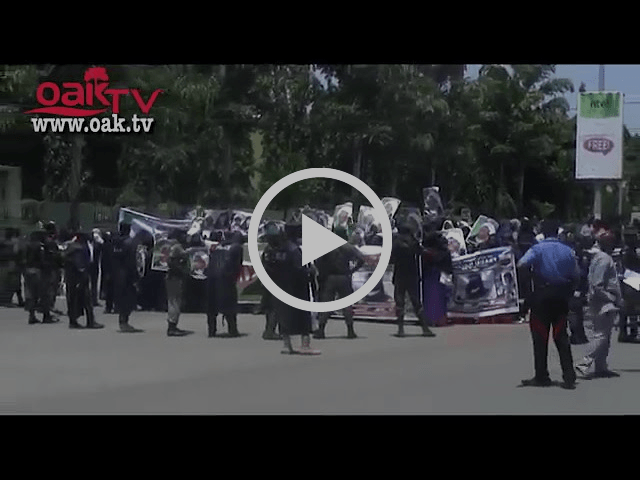 PRESS RELEASE: NIGERIA – One reporter, one mourner killed by police, others injured as police open fire in Kaduna on Ashura procession