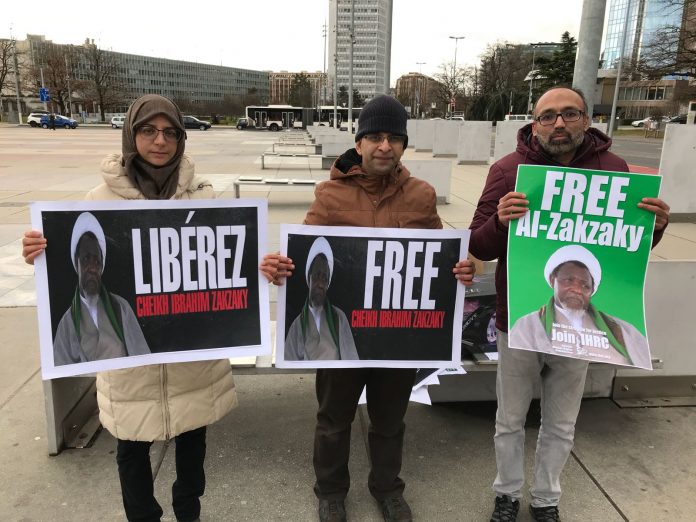 15 April 2018 will mark the 100 days of continuous daily #FreeZakzaky protests in Nigeria prompted since Sheikh Zakzaky’s deteriorating medical condition in January this year. IHRC is organising global protests on 15 April and invite every one who is able to join this campaign to demand urgent medical attention for the life threatening condition of Sheikh Zakzaky. Kindly contact us on info@ihrc.org if you can be a key to arrange a vigil, demonstration or any type of field activity in your country or a social media campaign and if so what assistance we can provide. If you want to suggest any other action please do so.

We request campaigners to continue with last week’s action alert and write to the Nigerian Ambassador / High Commissioner in your country, see Action Alert provided below. We have added a new email for Nigerian High Commission in UK as most of emails were bounced back last week.

To find out how you can help further, please visit the IHRC FreeZakzaky campaign page;HERE

I write to demand that Sheikh Zakzaky and his wife Muallima Zeenah are immediately allowed to leave the country for urgent medical treatment due to their critically deteriorating medical conditions.

The Federal Government will be held directly responsible if anything happen to the Sheikh or his wife. In December 2016 court ordered the Zakzakys’ release saying it was illegal and unconstitutional but the Government continues to stubbornly defy the order.

Sheikh Zakzaky remains in the Government custody, held without charge, along with his wife Zeenah since being detained over two years ago during a savage assault on his movement’s supporters by the armed forces.

Sheikh Zakzaky suffered stroke early January and his condition is further deteriorated in last few days. He was shot severally more than two years ago, losing his left eye in the process and is currently at a great risk of losing the other eye except something drastic is done, aggravating an already poor state of health and prompting supporters to ask that he be freed from detention to receive urgent medical treatment.
The continued detention of both of these figures as well as hundreds of others has been a huge stain on the reputation of your government and Nigeria. By not allowing Sheikh Zakzaky and Mallima Zeenah, whose health continues to severely deteriorate as a result of injuries inflicted by your authorities, the medical treatment he needs, you are adding further evidence of your government’s inhumanity and cruelty.
I look forward to your confirmation of their release for treatment by return.
Your sincerely,
[Your signature if posting]
[Your name]

#FreeZakzaky Daily Sit Out Continued in Abuja
31 March 2018
Large number of protesters are joining Sit Out every day in Nigerian capital city Abuja. In 29 March sit out a young boy, Master Aliyu Umar, whose twelfth birthday was only a couple of weeks ago, has joined in demanding for justice and freedom for Sheikh Ibraheem Zakzaky at the Daily Free Zakzaky Sit Out at the Unity Fountain in Abuja,

Master Aliyu spoke passionately and his demands are simple: put those who “killed my elder brother Aminu” on trial and immediately release Zakzaky, demanding the Buhari government to “free our leader.” 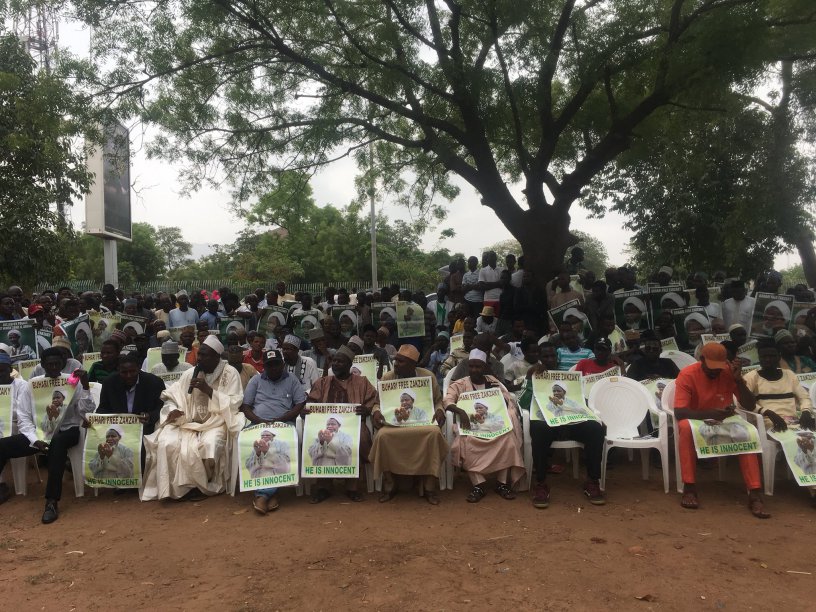 Free Zakzaky Protest Rocks Abuja on Friday
30 March 2018
Free Zakzaky protest rocks Abuja. The protest was started from the national Mosque on Friday the 30th of March 2018. As youths chants’ free Zakzaky’ the mosque atmosphere was filled with the slogan. At the time of this report 4 people were arrested by the Police 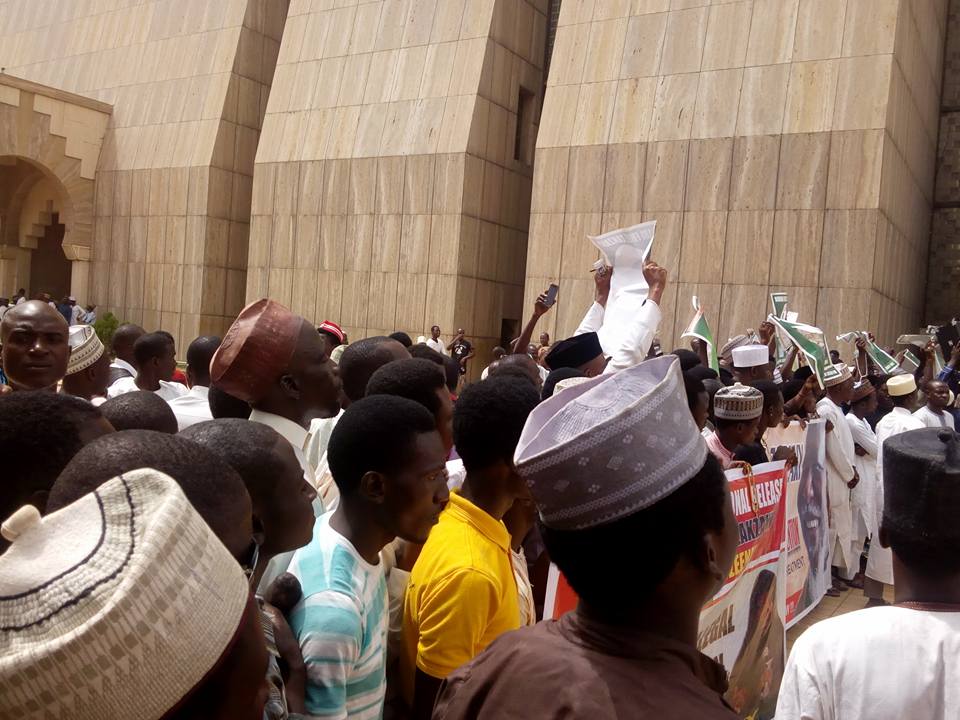 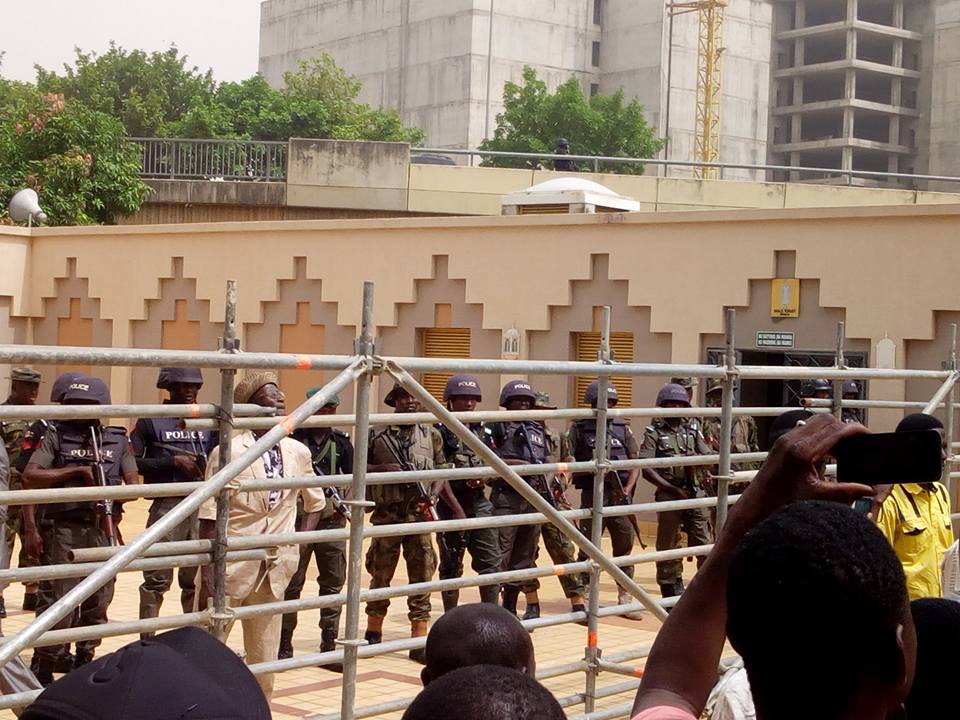 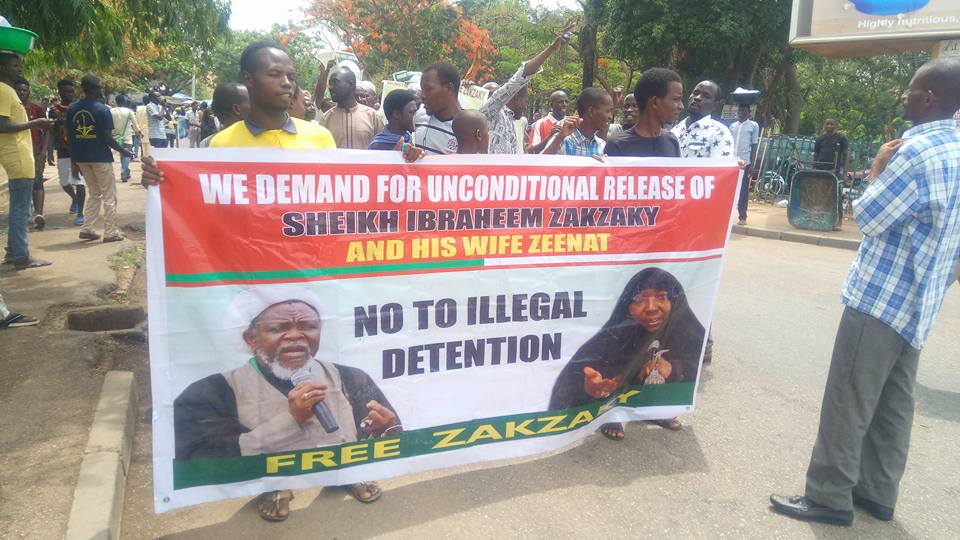 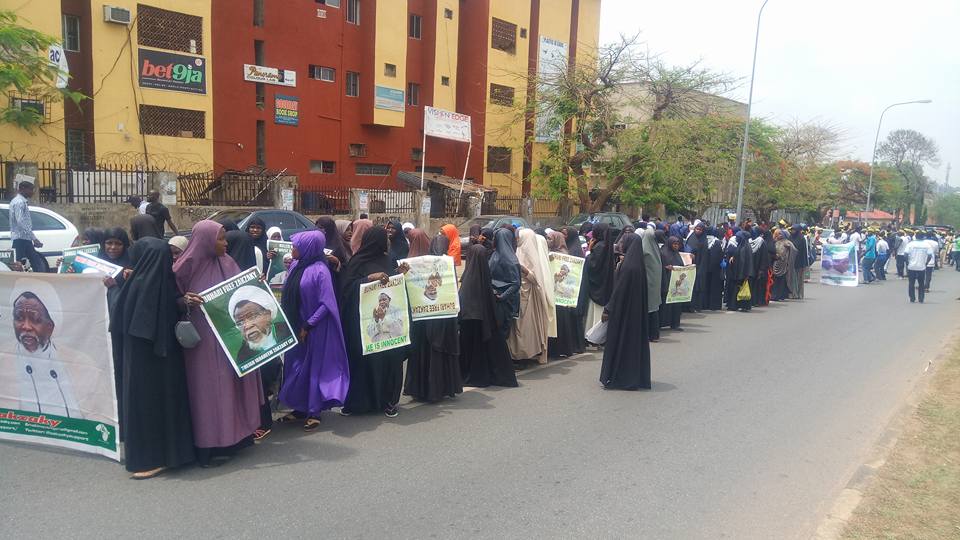 On Wednesday 28/03/2018, armed Police security operatives attacked another peaceful free Zakzaky procession in the city of Kaduna, calling for the released of leader of the Islamic Movement in Nigeria, Sheikh Ibraheem Zakzaky(H) whose a federal high court in Abuja, ordered for his release from illegal detention since December, 2016.

Peaceful brothers of the Movement come out in large number in the Western by-pass raising posters of the leader and chanting slogans for his release as order by the Court. The protest kicked off from Kabala West Junction along the Western by-pass, Namdi Azikiway, Kaduna around 6:30p.m. and peacefully marched along the street some meters away to where it was scheduled to be terminated, at Dutsamma Junction along the street. As the protest was just about to be terminated, the Police security attack the peaceful protesters by shooting with live ammunition.
In similar attack on 27 January, 2018, police killed 2 brothers and injured many in this city. 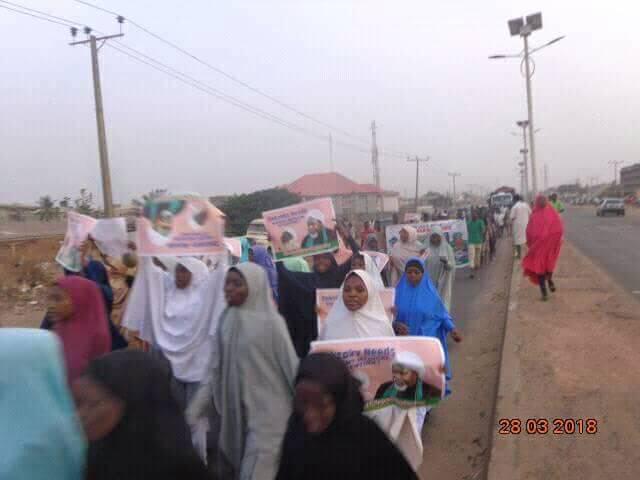 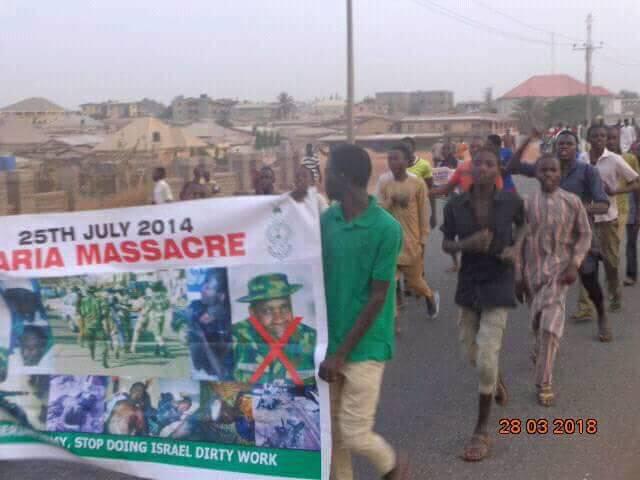 A massive free Sheikh Zakzaky Protest was staged in Abuja today Wednesday the 28th of March 2018. Thousands of people participated in the peaceful protest. The protest was terminated at the National assembly where some members of the National Assembly led by senator Kabiru Gaya addressed the protesters.
There was so much unease at the Three Arms Zone today as the Free Zakzaky Procession sits out in front of the legislative arm of government for hours demanding to see the leadership of the National Assembly to explain why Sheikh Zakzaky was still being detained despite a substantive court order for his release. 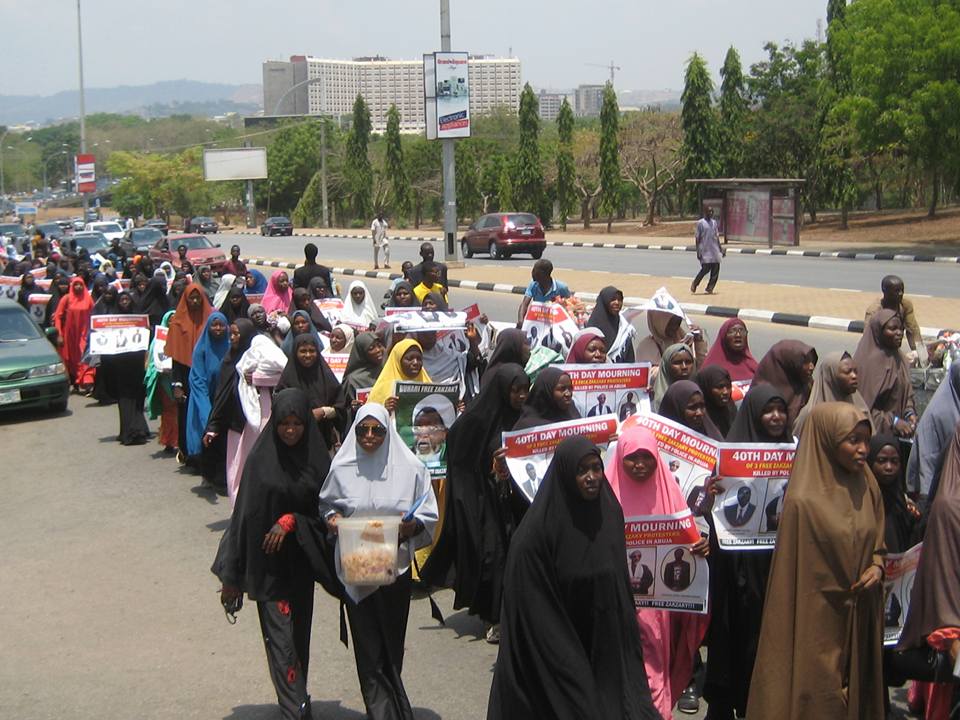 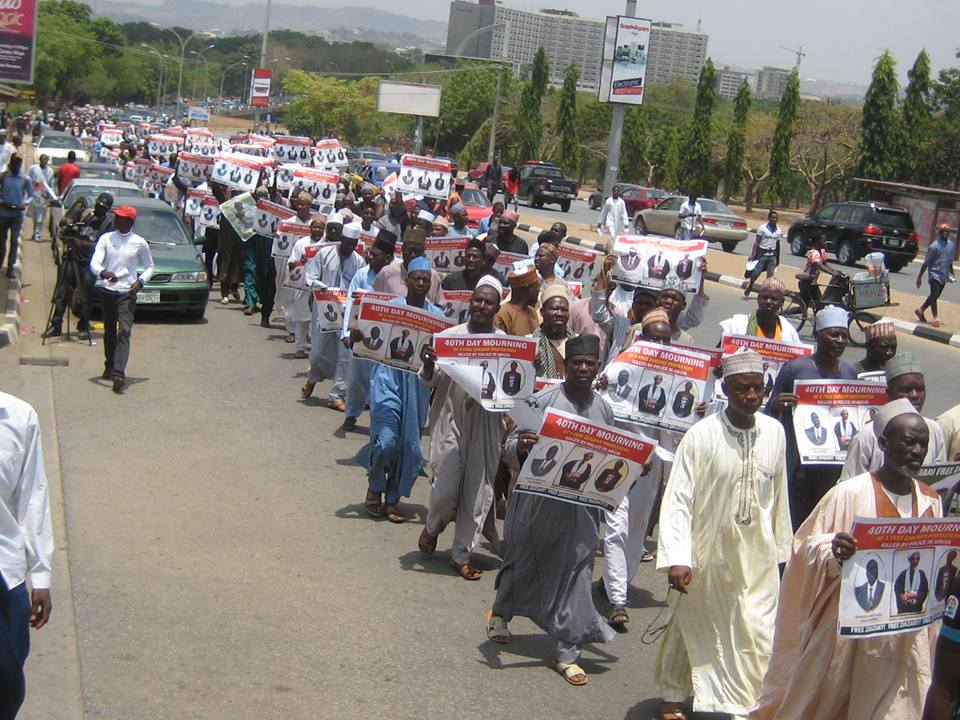 Security operatives are currently actively spreading misinformation and wild rumours with a view to breaking our will and resolve, and also to cause confusion so that they could seize the opportunity to turn our peaceful protests violent.
Credible reports have confirmed that hoodlums and security operatives have already been commissioned by the authorities to massively infiltrate our Free Zakzaky campaign activities to wreck havoc in our name and thereby instigate members of the Islamic Movement into misconduct, which they will then capitalize on to paint the Movement black. They will pretend they are working to free our leader while in fact they mean evil. By this evil plot, the hoodlums and security operatives will carry out series of attacks and subsequently attribute same to the “members” of the Movement so that they could achieve what they have so far failed to do, which is associate the peaceful campaigns to free Sheikh Zakzaky in Abuja as well as in all other parts of the country with violence in order to swing public opinion against the Movement and justify the continued illegal and contemptuous detention of our leader. Among other evil schemes, they plan to foment trouble by burning tyres and properties in the course of our peaceful processions. They also hope to achieve their mischievous aims by provoking us to wreak havoc and attribute same to a supposed reaction of members of the Islamic Movement. 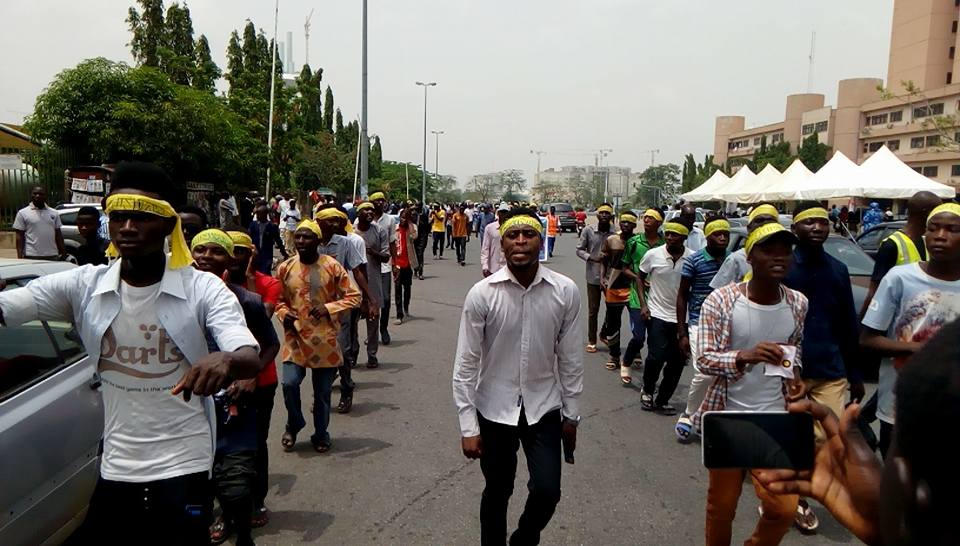 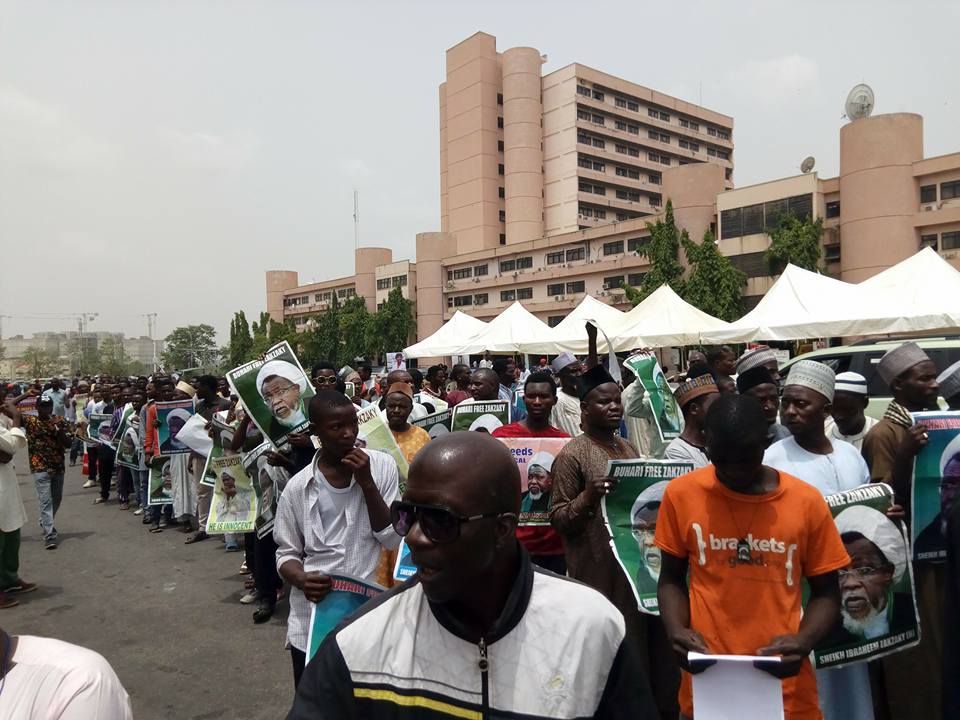 The whistleblower at the heart of the Facebook privacy scandal told the British parliament Tuesday that an Israeli intelligence gathering firm was involved in a hacking scheme targeting the president of Nigeria.
On Tuesday, Wylie, the company’s former research director, testified before a House of Commons committee investigating the misuse of Facebook user data, revealing some of the other the shadowy activities the company was linked to.
“The company utilized the services of an Israeli private intelligence firm, Black Cube,” Wylie told lawmakers according to reports in British media.
He said the Tel Aviv-based company was hired to “hack the now-president [Muhammadu] Buhari to get access to his medical records and private emails.” 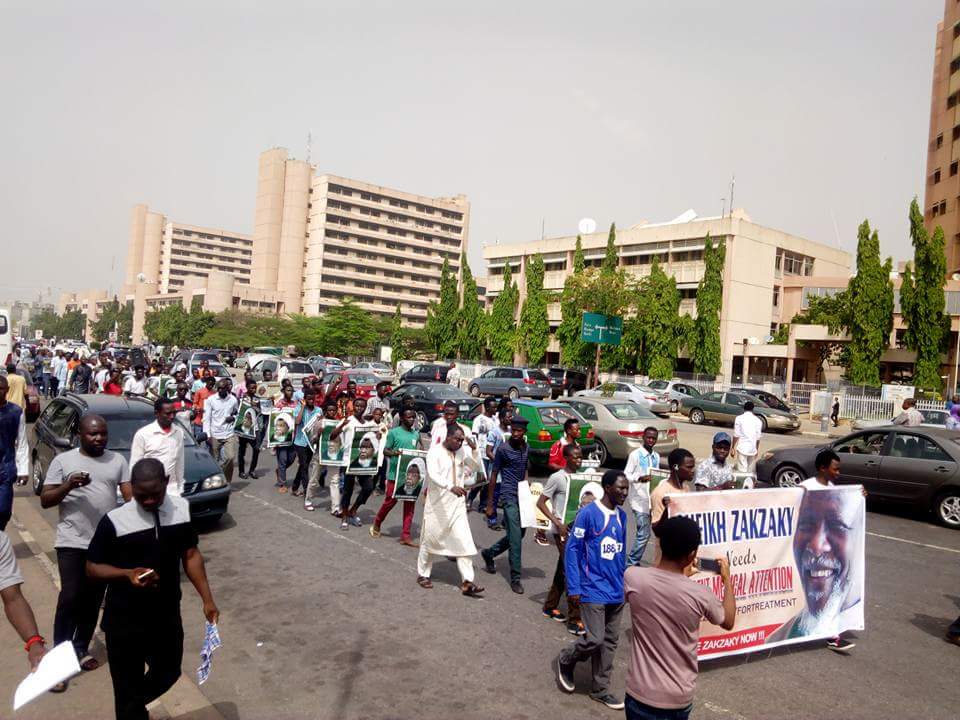 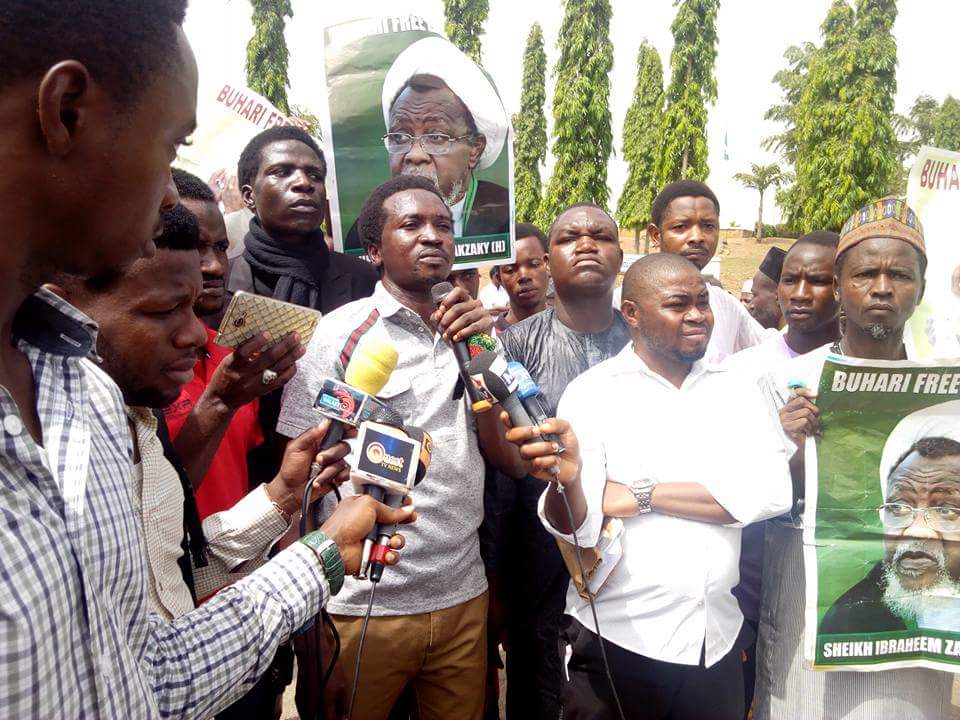 Reflections: Tributes To A Martyr With A Difference, Nusaiba;Yakubu

She was one of the thousands of members of the Islamic Movement in Nigeria under the distinguished leadership of Sheikh Ibraheem Zakzaky that the genocidal forces massacred in Zaria between 12th and 14th December, 2015 on the orders of President Muhammadu Buhari.

She was killed by Nigerian army at the Gyellesu residence of the leader of the Islamic Movement in Nigeria, Sheikh Ibraheem Zakzaky. I was reliably informed earlier during the pogrom by someone who met a lady survivor that Nusaiba was last spotted inside the Sheikh’s compound on that fateful day, at the time the soldiers set the house ablaze, and at that time she had already been shot. The narrator said as he made his way to safety from the inferno and rampaging soldiers, he heard her final call for help. Unfortunately, it was too late.

It would not be surprising if Nusaiba was among the martyrs that were finished off and their corpses burned, even after they were earlier shot and wounded by the soldiers.