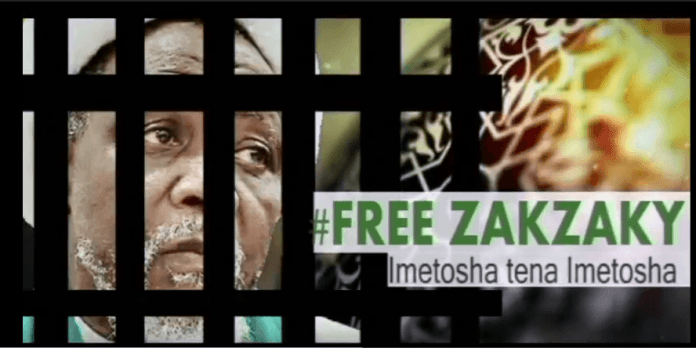 Below please find an update on this week’s protests and a recent update on Sheikh Zakzaky’s health, he is at high risk of loosing his remaining eye.

Global Protests are planned next week on 15 April 2018 to mark 100 days of continuous daily #FreeZakzaky protests in Nigeria demanding immediate medical treatment for the life threatening condition of Sheikh Zakzaky. We request campaigners to write letters (model letter provided in action alert) and arrange any type of field activity in your countries or if you can be a key to organise a demonstration to mark this 100 days campaign. If you want to suggest any other action please do so by contacting us on info@ihrc.org

1. CLICK HERE to send an email to the African Union and demand their intervention in this case by writing to the AU Chairperson President Paul Kagame, a model letter / email is provided below

I am writing to ask for your urgent intervention to allow illegally detained Sheikh Zakzaky and his wife leave Nigeria for urgent medical treatment due to their critically deteriorating life threatening medical conditions.

I am extremely concerned as Sheikh Zakzaky suffered a stroke early January and his condition is further deteriorated due to continued un-lawful detention preventing his medical treatment. He was shot severally more than two years ago, losing his left eye in the process and is currently at a great risk of losing the other eye.

I urge your office to play an active role and make known in unconditional terms that the Nigerian Government will be held directly responsible if anything happens to the Sheikh or his wife and due to seriousness and urgency of the situation I demand that the African Union takes the following actions;

2. Suspend Nigeria’s membership for the violence perpetrated by its army against the IMN;

Global FreeZakzaky Protests Planned on 15 April
07 April 2018
15 April 2018 will mark the 100 days of continuous daily #FreeZakzaky protests in Nigeria prompted since Sheikh Zakzaky’s life threatening medical condition in January this year. IHRC in coordination with Universal Justice Network and Global Free Zakzaky campaign announced protests on 15 April to mark this 100 days campaign and demand immediate medical treatment for the Sheikh and his wife. These Protests are planned in different countries including UK, Indonesia, Turkey, Geneva and Pakistan. 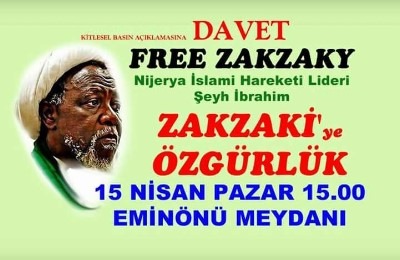 Breaking: Sheikh Zakzaky is highly at risk of loosing his remaining Eye
06 April 2018 – Islamic Movement Twitter
Sheikh Zakzaky’s remaining eye is developing chronic glaucoma, Sheikh’s personal Doctor recommended the Sheikh to be taking abroad for treatment by the specialist, because there’s no any known specialist to treat the condition in any of the Nigerian hospitals.
Sheikh has already lost one eye,gouged out by the army and various other gunshot wounds and untreated injuries until today since he was arrested in December 2015. He also suffered a stroke earlier this year which has further aggravated his dire condition.

#FreeZakzaky Daily Sit Out Continued in Abuja
07 April 2018
Daily Sit Out by coalition of NGOs continued and large number of protesters are joining Sit Out every day in Nigerian capital city Abuja. Men, Women and Children join every day for justice and freedom of unlawfully detained Islamic Movement leader Sheikh Ibraheem Zakzaky at the Unity Fountain in Abuja,

On 5th April coalition of NGOs led by Prince Adeyajanju joined the Sit Out, calling for the immediate release of Sheikh Zakzaky for medical attention. 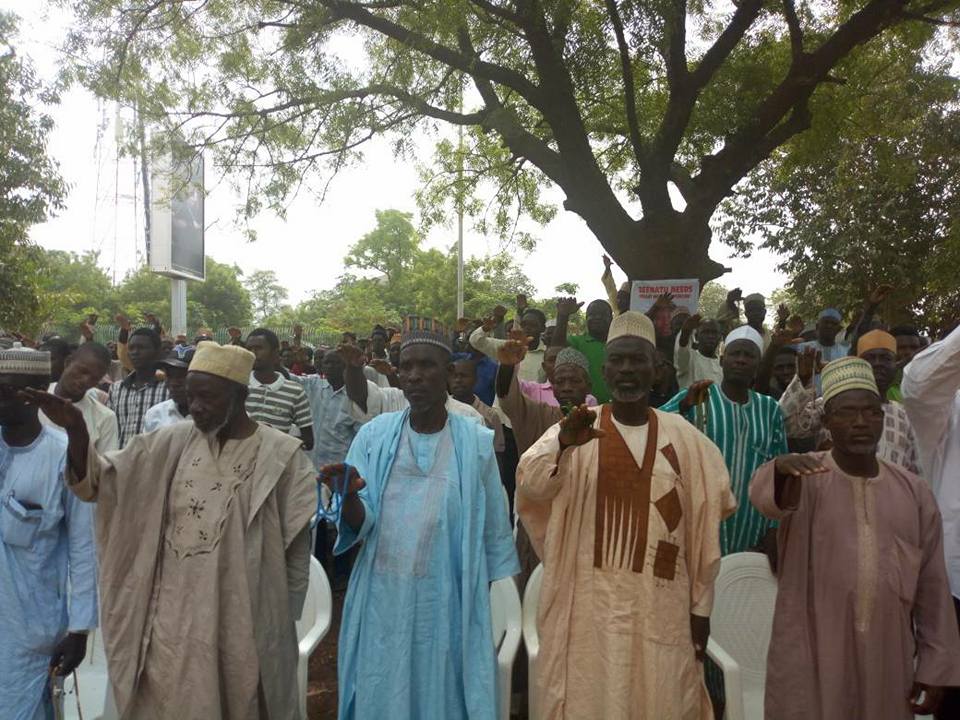 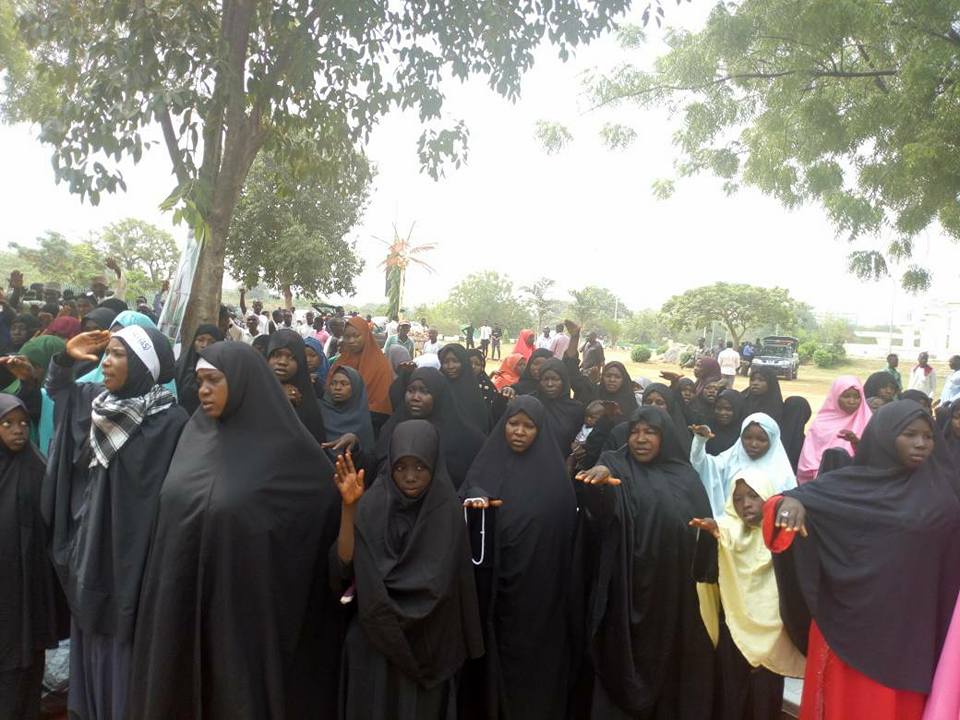 The day this year will be marked on Thursday 12th April 2018, which is usually held in every month of Rajab, the seventh month in the Islamic calendar, will be the 26th successive days to be so marked by the Movement each year. It is a day usually set aside by the Movement to honour all martyrs of the Movement since inception about four decades ago. This year’s event is coming against a backdrop of an astronomical increase in the number of Martyrs since the infamous Zaria genocide by the Nigerian army in December 2015. 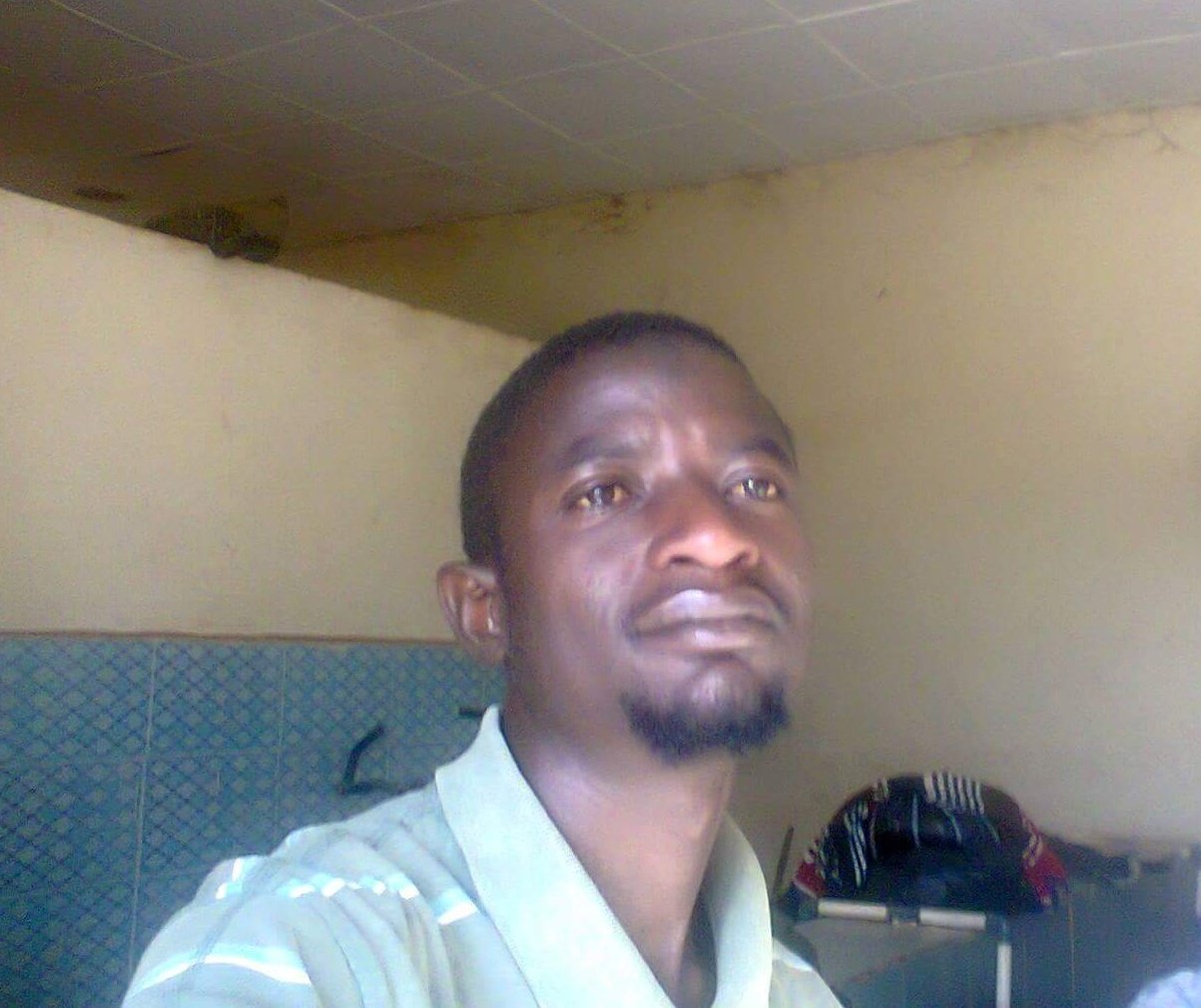 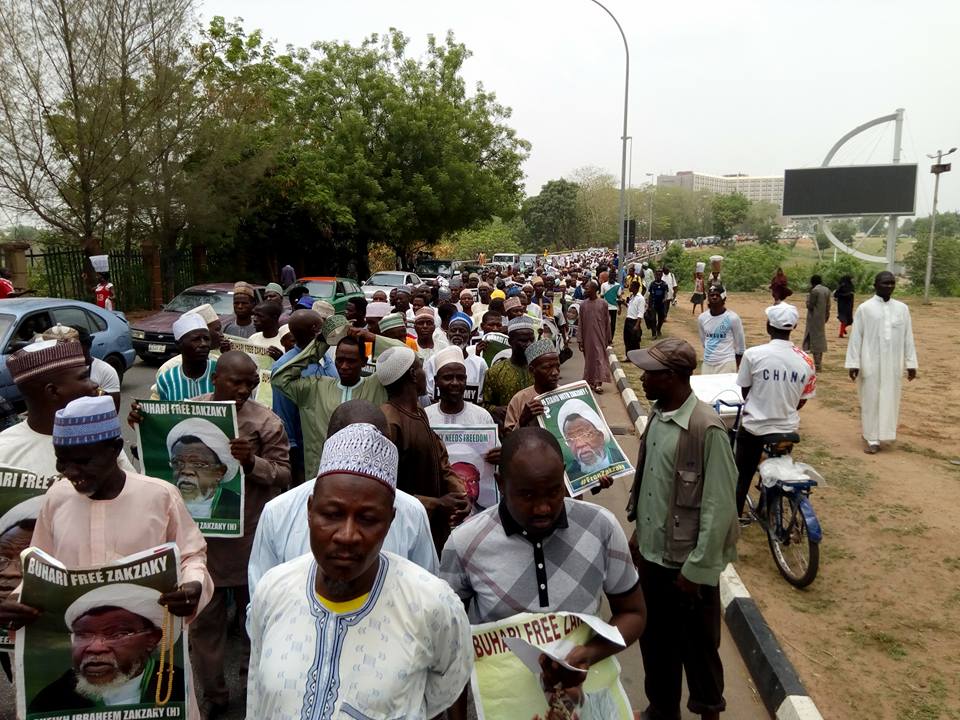 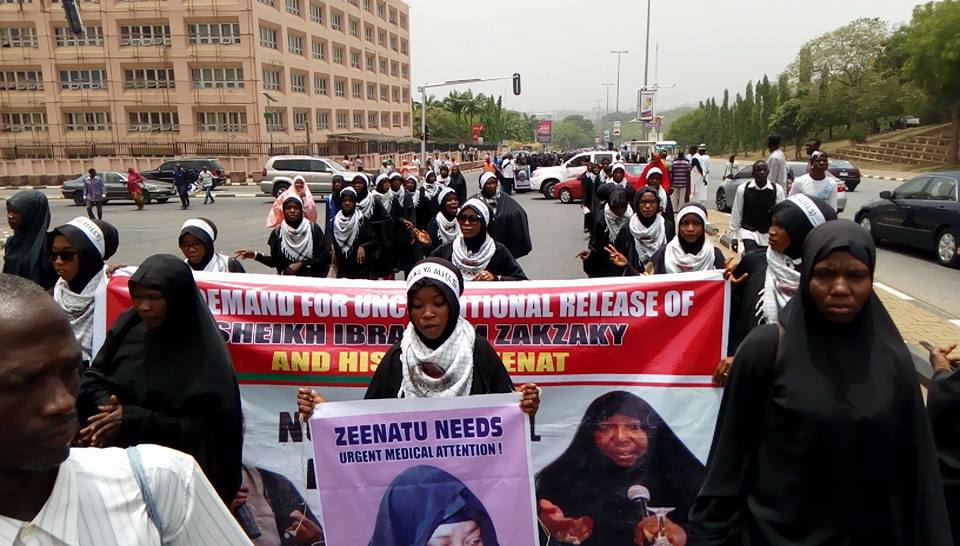 Massive WeAreAllZakzaky Protest on 4 April
04 April 2018
Thousands of protesters, including Men, Women, Youth and Children attended another massive We Are All Zakzaky protest in Abuja. Protesters with placards and banners marched in capital Abuja and the protest was terminated at Unity Fountain. WeareallZakzaky” protest was attended by Prominent figures such as Prince Deji Adeyanju and Pastor Yohanna Buru 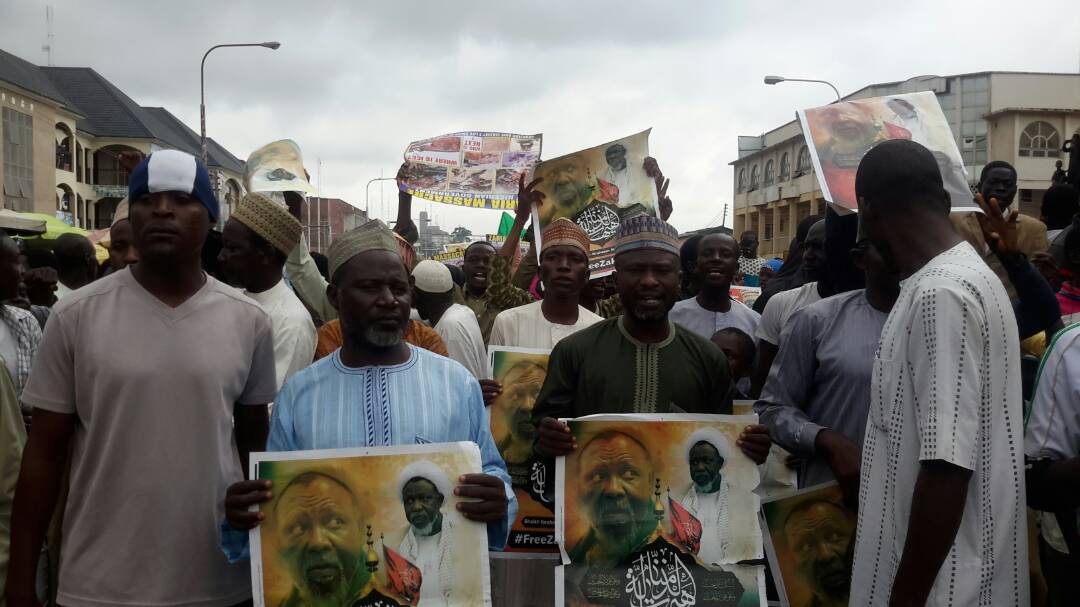 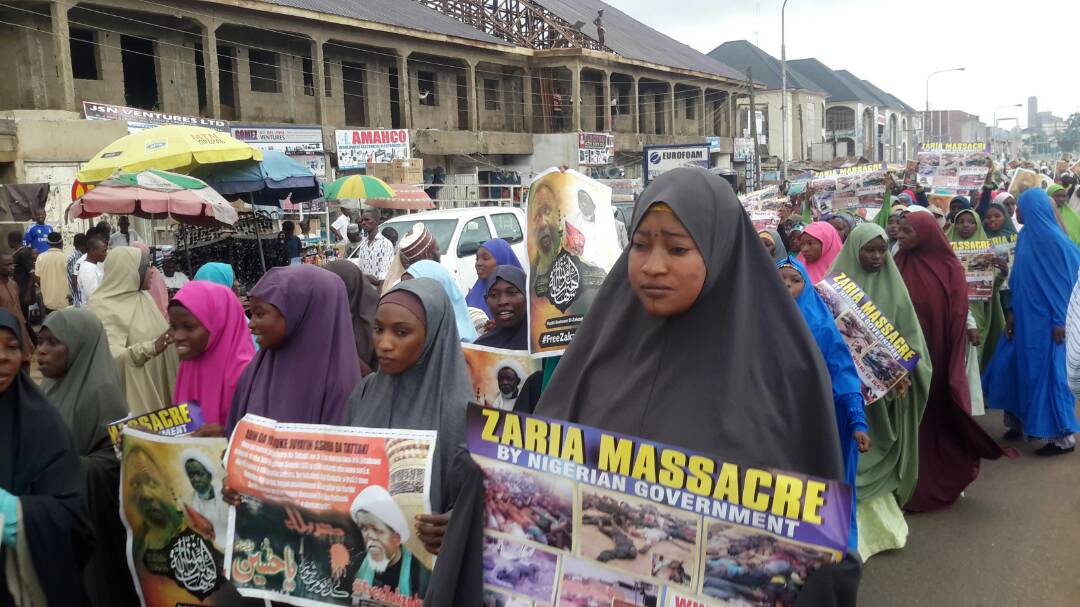 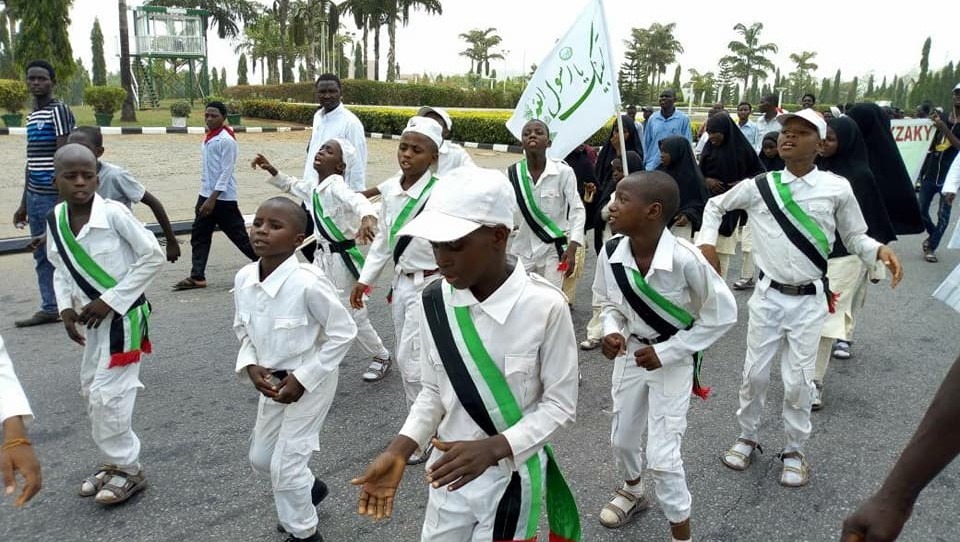 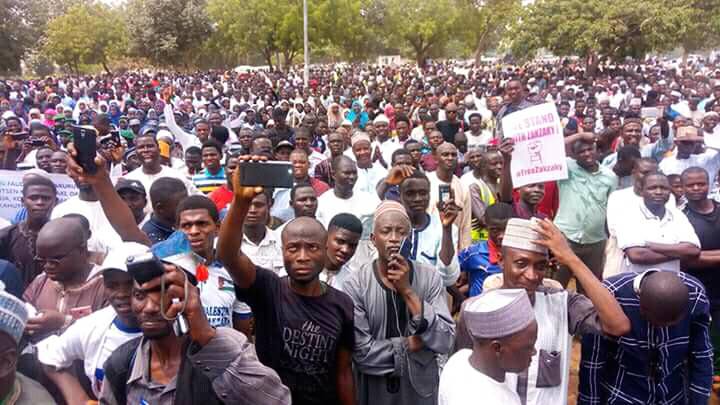 FreeZakzaky protest in Abuja on 3 April
03 April 2018
Peaceful Free Sheikh Zakzaky Protests continued in capital city Abuja, a similar protests was staged in on Tuesday the 3rd of April 2018. Protesters marched in federal capital with banners and placards chanting for the freedom of their illegally detained leader Sheikh Ibraheem Zakzaky.