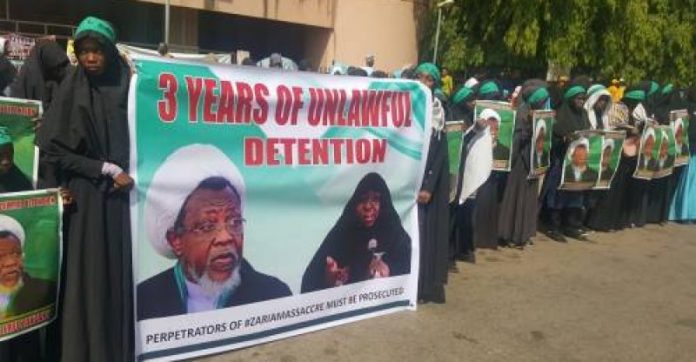 Below please find an update on the continuous Free Zakzaky protests in Nigeria. During this week programmes, protests and rallies were held in various Nigerian cities to commemorate the third anniversary of the Zaria massacre and illegal detention of Sheikh Zakzaky.

On 02 December 2016, the Federal High Court in Abuja ruled that Sheikh Zakzaky and Muallimah Zeenah should be released within 45 days. The court described their detention, which began in December 2015 as illegal and unconstitutional. The deadline for the court order expired on 16 January 2017 but the Nigerian Government has refused to obey the court order. The Nigerian government has kept them detained illegally for over three years now and Sheikh Zakzaky and his wife still remain in the custody of the state, in clear contempt of the court order.
The African Union’s silence on this issue is putting more innocent lives at risk. Recently Nigerian authorities have killed over 60 peaceful FreeZakzaky protesters, and arrested, tortured, and injured hundreds of them with live bullets in a barbaric attack on ArbaeenTrek 2018.

Free Zakzaky Protests in Kano and Bauchi Marking 3 years Since Zaria Massacre
17 December 2018
Massive Free Zakzaky protests marking 3 years since Zaria 2015 massacre were held in various Nigerian cities including Kano and Bauchi. In Kano the protest  was led by Mal Sani Abdul Raheem, it started from Kano State Radio Cooperation around 10:30am passing through Kofar Nasarawa Area and ended at the old city Friday Mosque chanting and demanding release of Shaikh Zakzaky his Wife. A similar protest was held in Bauchi to protest 3 years of illegal detention of the leader of Islamic Movement Sheikh Ibraheem Zakzaky. Following are few pictures of the protests in Kano and Bauchi cities.

ABUJA, Nigeria — The message sent on Twitter was clear: When Nigerian soldiers opened fire on rock-throwing protesters in late October, Nigerian officials swiftly defended them, saying their forces had simply done what President Trump told American soldiers to do in the same situation.

The Nigerian military justified its actions by including a video clip of Mr. Trump’s remarks about migrants heading toward the American border, in which he warned: “They want to throw rocks at our military, our military fights back.”

Nigeria’s defense came after its soldiers had shot at protesters — members of a minority Shiite organization — marching on the outskirts of the capital, Abuja. The military insisted that the soldiers had taken action only after being provoked by the protesters, who hurled rocks at them. Ten soldiers were injured in the melee, it said. The military also said a total of six protesters were killed during marches.

But a close review of video from the largest and most deadly of the protests, as well as interviews with more than a dozen witnesses, clearly shows the military opening fire on unarmed demonstrators, sometimes shooting indiscriminately into the crowd at close range as people turned and tried to flee.

12-14 December, 2015 will forever remain in our minds, because they were the days when Buhari regime exhibited its worst brutality in its effort to annihilate the Islamic Movement and its Leader, Sheikh Ibraheem Zakzaky. During these dark days bullets were rained on our Leader and his wife, who were then drag in their own blood out of their house, after 1000+ of his followers were killed in cold blood. Indeed such injustice is unprecedented in the history of this country. Click here to read the full article.

A programme marking the 3rd year commemoration of Zaria massacre was held in Abuja on Saturday the 15th of December 2018. Speakers include Human Right Activists which include Zainab Dabo and Barrister A. U. Adojo.

Zainab spoke on the atrocities of Buhari regime on defenseless citizens and levels of crimes committed by Nigerian Army in Zaria. Another speech was by  Barrister A. U. Adojo ESQ who spoke on “Legal assessment on the gravity of crimes committed against sheikh Ibrahim Zakzaky and his followers”.

12-14 December, 2015 will be unforgettable for ever, being the days when Buhari regime exhibited its worst brutality in its effort to annihilate the Islamic Movement and its Leader, Sheikh Ibraheem Zakzaky. During these dark days bullets were rained on our Leader and his wife, who were then drag in their own blood out of their house, after 1000+ of his followers were killed in cold blood including his 3 sons and his senior sister. Many were burnt beyond recognition in the house, while Kaduna State Government declared that 347 bodies were buried in a mass grave at Mando area in Kaduna.