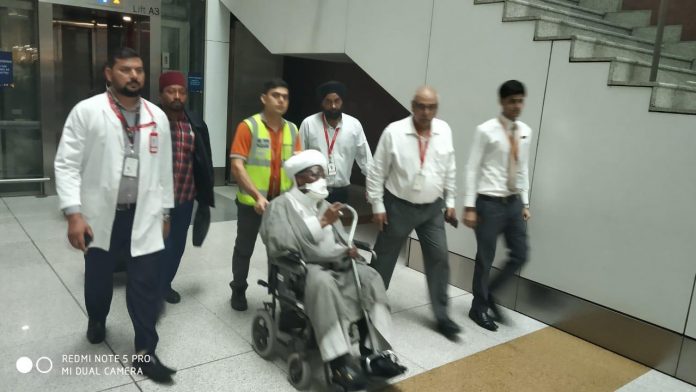 Ask the Ambassador / High Commissioner of your country to demand the Indian authorities cease their harassment of the Sheikh and Mallimah.

Indian police / security services appear to be working in collaboration with Nigeria security services, and effectively imprisoning Sheikh El-Zakzaky and Mallimah Zeenah in hospital in New Delhi.  To watch a short video on the current situation please visit this page or watch it at the end of the page.

Please contact the Embassy / High Commission of your country in New Delhi.  A model email / letter is also provided should you wish to use it and emails for key countries.  Please keep all correspondence polite.

Dear [insert the name of your Ambassador / High Commissioner],

I am writing to ask you to make immediate representations to the Indian government to respect the rights and freedoms of the Sheikh and his wife and allow their medical treatment unmolested and without restrictions.  It appears from reports that the Indian police and security services are collaborating with the Nigerian security services in perpetuating the illegal detention of the pair.

They had been held without charge since the December 2015 Zaria Massacre by security services in Nigeria (more information on their case is available on www.ihrc.org.uk).  Both suffered catastrophic injuries during the massacres, and the Sheikh’s health in particular critically deteriorated in the last month.  The courts in Nigeria demanded the government release the pair in 2016, and a court early this month demanded the government allow them to travel for urgent medical treatment this month.

Despite this, on arrival in New Delhi, they have effectively been under the control of Nigerian and Indian security services, who have prevented them from leaving the hospital, interfered with their treatment by blocking them access to their medical team and taken and withheld legal documents from the.  Harassment has reportedly included at least one physical assault on the Sheikh by an armed Indian Policeman stationed outside the Sheikh’s hospital room.

I trust you will make immediate representations with the Indian government to desist in this violation of Sheikh El-Zakzaky and Mallimah Zeenah’s rights.  Further they should not be allowing Nigerian security services to be acting with impunity on Indian soil.

Selected names and email addresses of Ambassadors / High Commissioners can be found below.  Please contact us info@ihrc.org if you have trouble finding the details of your country.

Ireland: Mr Brian McElduff, Ambassador of Ireland to India, Webform https://www.dfa.ie/irish-embassy/india/contact-us/ choose ‘Contact the Ambassador’.  Use this text or something similar (there is a 250 character limit):