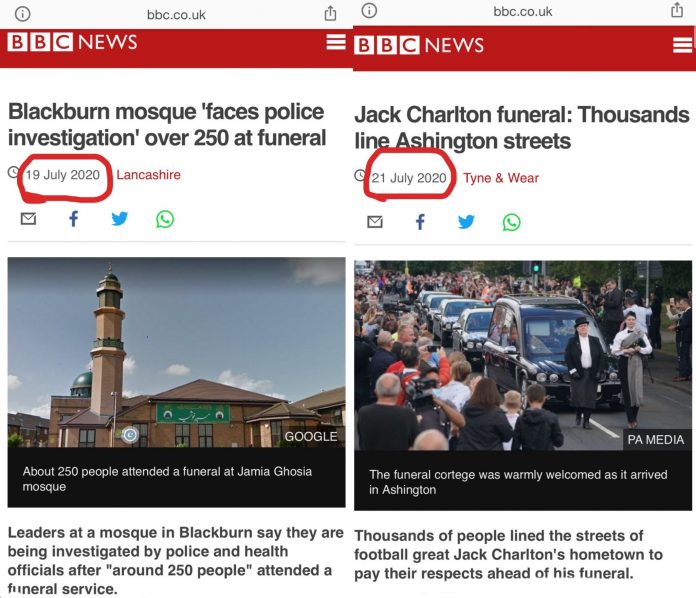 As Massoud Shadjareh recounted in his video of 7 August (see below), IHRC has written a complaint letter to the BBC regarding their coverage of the coronavirus crisis with regard to Muslims.

A copy of the letter can be read under the video. Please take a few minutes to contact the BBC with your own concerns about how racist and Islamophobic stereotypes are finding their way into news coverage, and how the BBC itself has perpetuated such stereotypes with the type of reporting above.

I am writing to register in the strongest possible terms my shock at your organisation’s targeting of the Muslim community in your coverage of the Coronavirus pandemic.

From the outset of the crisis you have used the pandemic to spread negative imagery about Muslims in what appears to be a calculated attempt to create negative perceptions about the community in your audience.

For example, I have lost count of the number of times that you have displayed photographs of Muslims alongside worrying stories about the spread of the pandemic even though the subject matter relates to all religious and ethnic groups.

This repeated singling out of Muslims to illustrate Covid-19 creates an association between the two in the minds of readers and viewers, strengthening existing stereotypes of Muslims as being a “fifth column” or outside the mainstream.

Your reporting of how the pandemic is affecting Muslim communities also leaves much to be desired. The BBC has wasted no opportunity to amplify localised outbreaks in Muslim communities while underplaying the role played by wider society in the spread of Covid-19.

A recent case in point is the coverage of mourners lining the streets of Ashington to pay their respects to the late Jack Charlton. Another is the VE Day celebrations which were widely reported without any reference to the risks that they posed to those taking part and indeed the wider public.

In advance of the Muslim festival of Eid al-Adha on 31 July your network dutifully reported the government advice for Muslim families to observe social distancing (effectively not to celebrate with their extended families) without questioning its sense or justice in the light of the wider permissibility of congregating in pubs or restaurants.

Your remit as a public service broadcaster is to represent all communities fairly and equally. However your treatment of the Muslim community, particularly during this pandemic, has

fallen very short. Instead of challenging racism and Islamophobia you are perpetuating the stereotypes and negative associations on which it thrives.