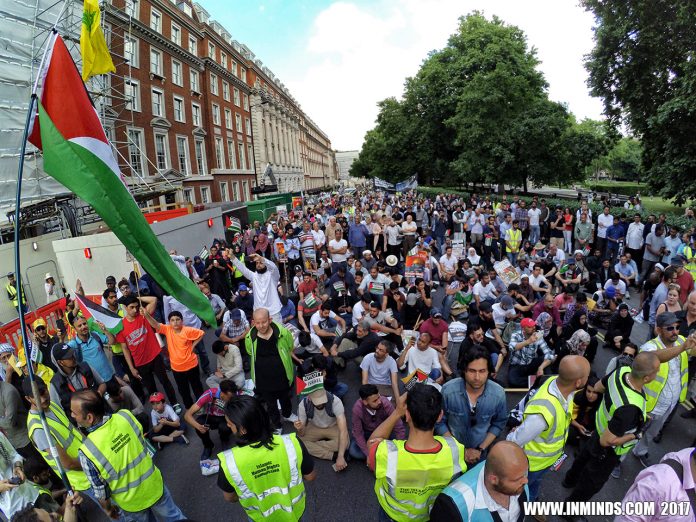 I am writing to raise our concerns about a number of issues that arose during the al-Quds Day rally on 18 June 2017.

IHRC and other groups organised the annual event which has run in London for around 30 years with the purpose of showing solidarity with the Palestinian people. The event was organised with permission from the police and the organisers were in constant communication with them before and on the day of the event. On the day, a group of counter demonstrators turned up to show their disagreement with the rally. These included far right-wing extremists from the EDL and Britain First who shouted racist abuse like “F*@k the Palestinians” and “go back to where you f*&^%$g came from” at our attendees.

In the video linked below you will see Ishmael Sali, a counter demonstrator, wrapped in the Israeli flag and walking into the Al-Quds Day crowd to harass the attendees of the rally. There was a designated counter demonstration area, which he left to approach our rally. He was asked to leave but refused and engaged in verbal exchanges until the police escorted him away.

As he walks away Mr Sali refers to all Muslims as ‘child molesters’. Calling Muslims paedophiles was calculated to offend and many of the attendees of the rally felt he had made the comment to target them for their religious faith. People reported that they felt alarmed and distressed at being verbally assaulted in such a vile manner because of their religious orientation.

This 8 minute video (link below) was taken by Jason Silver using a camera that hung on his chest. He initially uploaded this on his social media, but has since removed it. Mr Silver’s bigotry includes accusing the participants of being terrorists, of being child killers, referring to law abiding citizens as ‘Muslim terrorists’, of being a disgrace to the human race and that they don’t belong on this planet. He even accused the attendees of the march, consisting of women and children, of being behind the Manchester and London terror attacks because they were Muslim.

In addition, EDL counter-protesters were caught on camera shouting racist abuse, making derogatory comments about Muslims and being aggressive and confrontational. In the video (link below) you will see two EDL counter-protesters flying the English flag. The police had to stop them from getting closer to the protesters as one of them was extremely agitated and seemed to want a fight, which was a clear breach of the peace.

The aggressive counter-protester was pushing for a fight as seen 02:00:15 into the video (link below) saying “go and get a 12 year old you dirty f*@%er. What are you gonna do to me? F*@k all you dirty c^*t. You are nothing. Come on then I’m f*@%ing here. You dirty grooming b@$+@#ds.” His choice of words, manner of delivery and demeanour was highly aggressive and was meant to be threatening, and was in fact threatening to our stewards and attendees to whom it was aimed at. The two EDL counter-protesters would then proceeded to start a racist chant “F*@k, F*@k Palestine”.

Our most serious concern relates to the attack carried out by Darren Osborne. According to reports, Osborne, who attacked a mosque in Finsbury Park on the same day as the rally, was initially planning to target the al-Quds Day attendees, but arrived too late to carry out an attack. There are articles written about Osbourne being thrown out of the Hollybush pub in Pentwyn, near his home, for spewing Islamophobic rhetoric and mentioning the Al-Quds Day March and that “someone needs to do something about it.”

We bring these matters to your attention because the Metropolitan Police has not provided any support or assurances since the rally. No officer has approached us to discuss what Darren Osborne had planned, what risks he or others continue to pose to IHRC or other organisations, or what can be done to keep attendees safe in the future. This is also true of the racist and Islamophobic abuse that the attendees were subjected to. This lack of communication and support from the police has left us and our supporters feeling isolated and vulnerable to attacks from extremists.

The Metropolitan Police is there to protect and serve everyone, but right now it feels you are there to police the Muslims not protect them.

At 0:13 Mr Silver shouts at those gathered: Muslim terrorists around the world killing everyone.

At 0:25 Mr Silver accuses those Muslims who had gathered to show their solidarity with Palestinians: you’re all terrorists. Get out of our country. This is England. We don’t support terrorists in our country. You’re a disgrace.

0:37 – Silver: Remember the dead in London and Manchester by the hands of Muslim extremists.

0:42 – Silver: and you support terrorists in the UK. Disgraceful. Shame on you.

1:01 – Silver: you’re a disgrace to all of Manchester dead and London dead.

1:03 – Person in background: you’re all terrorists and murderers.

1:30 – Silver: You teach 4 year olds how to murder Jews on Palestinian TV.

2:04 – Silver: Stop the invasion of Israel by the Muslims…you’re a disgrace.

2:10 – Person in background: You support Isis

2:14 – Person in background: You support Isis. Hizbullah is Isis.

2:20 – Silver: Are you against the dead in Manchester. Disgraceful.

2:38 – Person in background: Hizbullah are Isis.

2:42 – Silver: You kill Jews, you kill Christians, you kill everyone in your path.

2:55 – Silver: you kill children, you kill, you kill Jews, you kill Christians, you kill everyone in your path.

3:18 – Silver: for all the dead in Manchester and London. You support terrorists. Disgraceful.

3:26 – Silver: remember the dead in Manchester and London…and Israel by your hands.

5:04 – Policeman: Move out this way…do you like to join your protest to – is it Grosvenor Square? Would that help?

Someone in background: I would

Police Officer: if you go down there, you could maybe do your protest there.

5:14 – Policeman: [inaudible] can’t let you. You’re not one of their supporters are you?

5:18 – Policeman: I’m saying, you’re in the middle of road at the moment. Maybe walk on the side of the pavement.

6:40 – Silver: stop the killing of Christians and Jews

7:14-18 – Silver: You teach children how to stab Jews on public TV. Disgraceful.

[EDL protesters on the side, flying EDL/English flag with Knights Templar logo in the middle. Flag has ‘EDL’ and ‘No Surrender’ written on it]

2:00:37 – Police [in between stewards and EDL protesters] : You have been warned about your language

2:00:50-2:01:16 – EDL Counter-Protester: Go marry your sister. Go on f*@%ing myspace. What you want a photo? Go away you little pratt. Off your trot. Go marry your cousin or something. Make yourself busy. Don’t point your finger at me. What are you gonna do?Â  You! What I’m a paedophile? You dirty piece of s!*t. You’re nothing mate. You’re nothing. You’re a dirty Muslim paedo.

Read scanned images of the letter below: 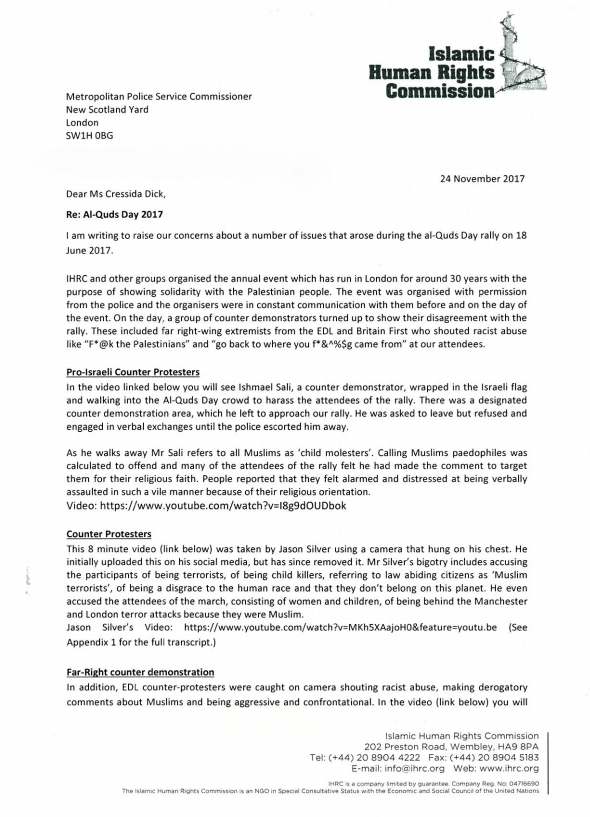 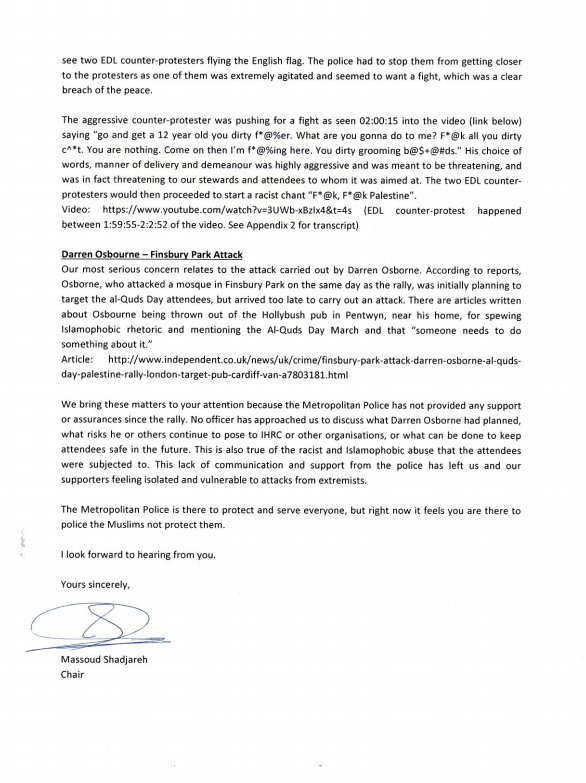 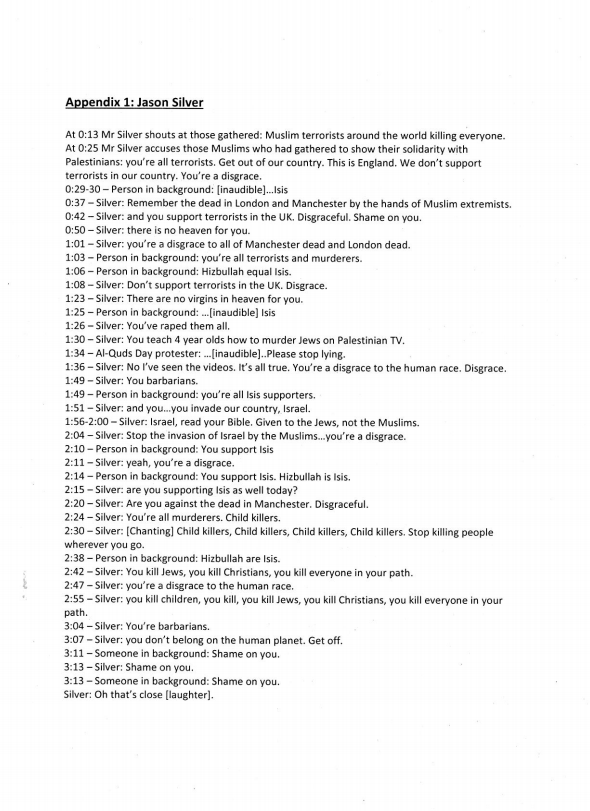 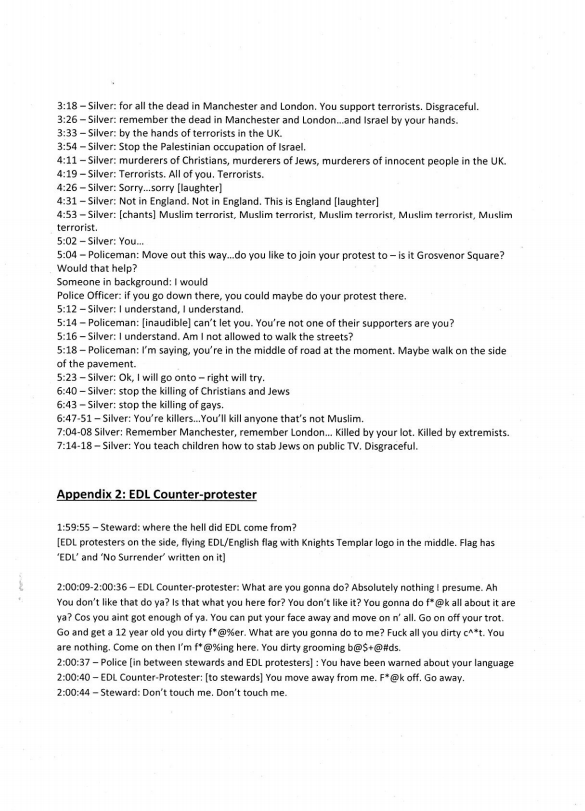 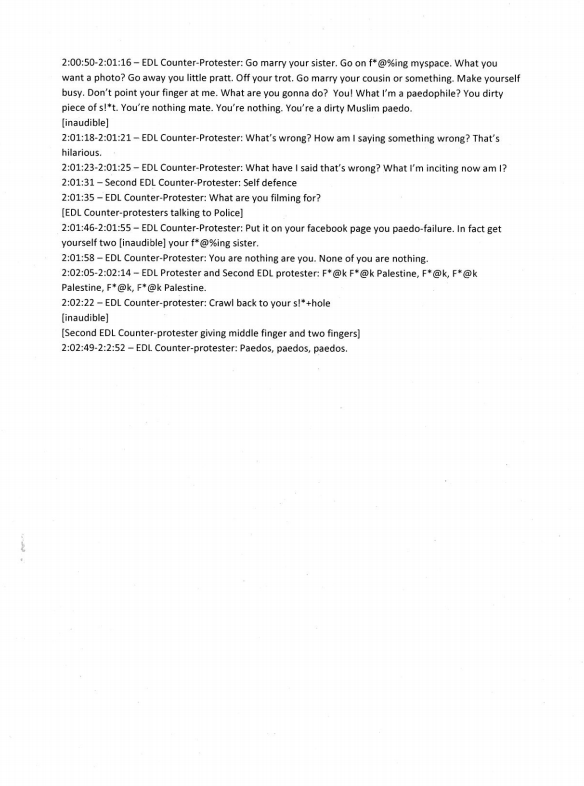