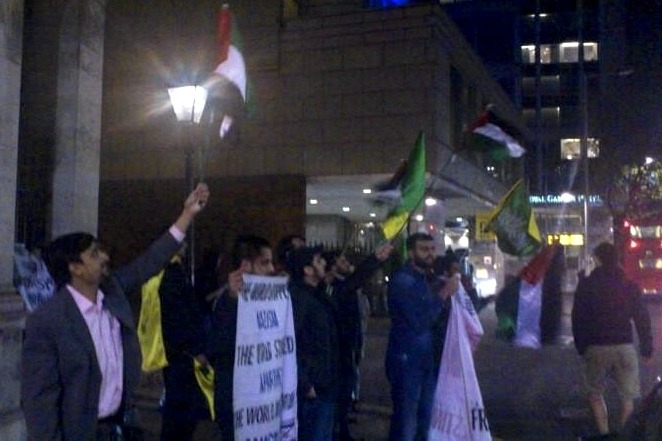 On 14 November 2012, 40 protestors convened outside the Israeli Embassy in London to condemn Israel’s launch day of firing of missiles, into one of the most densely populated areas in the world. There have been 166 confirmed dead and 1200 injured including women and children. Rinan Arafat, a seven-year-old girl, was just one of the children killed in the attack.

Protestors held placards and chanted slogans condemning the murderous actions of the Israeli regime. IHRC also urged all its supporters to write to their local MPs urging them to pressure their Israeli counterparts into releasing all political prisoners, and provided a sample letter on their action alert page for guidance.

IHRC has called on the international community to condemn this act of aggression and call for a halt in Israel’s murderous actions. This is a continuation of acts of aggression against Gaza, and Israel has continued to escalate the situation despite agreeing to a ceasefire. Under the Egypt-mediated ceasefire agreement, the Palestinians and the Israelis agreed to stop hostilities against one another, however the Israeli blockade has still not been lifted and Israel has resumed gunfire injuring innocent Palestinians.