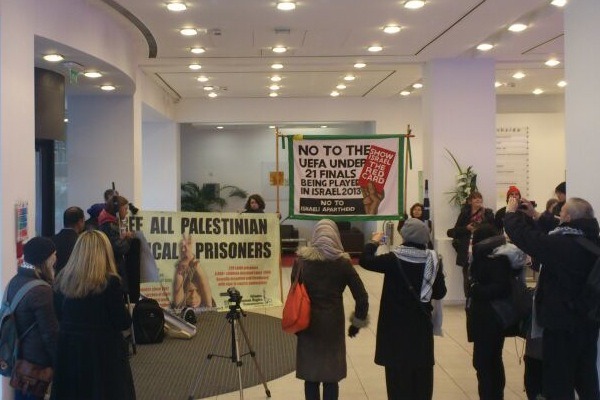 On Friday 01 March 2013, IHRC and Inminds co-organised a vigil outside the G4S Headquarters in London.  About twenty activists and members of the public convened to protest G4S’ provisioning of Israeli prisons and interrogation centres in which Arafat Jaradat was severely tortured leading to his death.

British-Danish security firm G4S has made provisions to the Israeli security apparatus including a perimeter defence system and command control centre for Ofer prison in occupied Palestine, and security systems for the al-Jalame interrogation centre in Israel.

At about 3:00pm, some of the protesters occupied the lobby of 105 Victoria Street where G4S is headquartered. They voiced deep concerns over G4S complicity in keeping the Israeli torture dens operational and demanded that G4S immediately discontinue all business with Israel. These concerns followed similar demands that were submitted in a letter for the CEO of G4S, Nick Buckles in October 2012, falling on deaf ears.

The next vigil is –