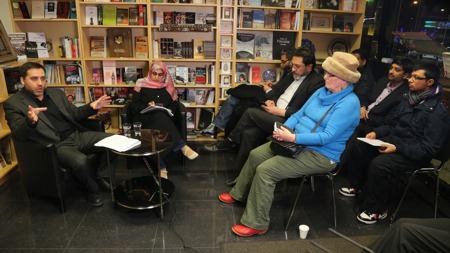 Film Screening and discussion with Roshan Salih about his latest documentary: MI5, Spies, Intelligence gathering and the UK Muslim Community

We were delighted to host the film screening of MI5, Spies, Intelligence gathering and the UK Muslim Community by Roshan Muhammad Salih. Roshan Salih is an independent documentary maker and he showed that a lot of resources are being used for the ‘so-called’ terrorism threat by the government and they are monitoring the Muslim community more than any other. It was an evening of awareness to those who needed to develop a more profound understanding of the operation of Islamophobia and how the intelligence agencies are using techniques which Muslims are unaware of and how this is impacting on their civil liberties.

He discussed various aspects of how spying is taking place through placing bugs in institutions like schools and universities, Mosques, restaurants, offices and monitoring young people especially women, and women’s organisations. This is being done as part of a counter-terrorism policy to deal with ‘radicalisation’. They are also targeting Muslim leaders and university students to spy on fellow Muslims.  Roshan argues that as a British citizen you may be victim of terrorism and security needs to look at the real terrorists and not target all Muslims, as a whole.

He put forward that Muslims need to unite and not be divided and be one as Muslims and not victimise ourselves.

You can watch Roshan’s original documentary below –

An image gallery from the event below