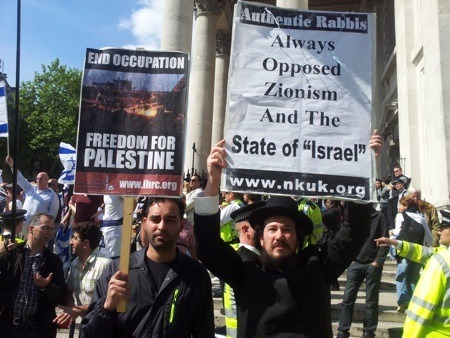 On Sunday 02 June 2013, activists and members of the public held a peaceful demonstration near Trafalgar Square to show solidarity with Palestine and outrage over the parade and rally to celebrate 65 years of murder, rape, and ethnic cleansing of the Palestinian people by the occupying forces (Israel).

Raza Kazim from the Islamic Human Rights Commission, Naomi Wimborne-Idrissi from Jews for Boycotting Israeli Goods, and representatives from Neturei Karta were among the featured speakers.

Kazim pointed to widespread Israeli human rights violations particularly those targeting children, and Wimborne-Idrissi encouraged the public to join the Boycott, Divestment, and Sanctions (BDS) movement as a practical and proven effective campaign towards mounting pressure on the Zionist regime. The message from Neturei Karta was clear, they unfolded a banner stating “the State of “Israel” does not represent World Jewry” and “Judaism rejects the Zionist state and condemns its war crimes”. The rabbis present at the demonstration reminded the Jewish attendees of the Seven Laws of the Children of Noah in the Torah which explicitly prohibit both Murder and Theft. Israel, for the last 65 years, has been responsible for indiscriminate attacks killing both innocent women and children, and land theft creating almost one million refugees between 1947 and 1950 alone.

Soon after the counter-demonstration had began, the Zionist spat at the Rabbis and surrounded the protestors, drawing more public attention towards Israeli racism. This did not deter the protestors from conveying their very clear message “Judaism Yes, Zionism No, the State of Israel must go”.

This demonstration was part of an ongoing campaign led by IHRC and Innovative Minds which is made possible by our volunteers.

To register as a volunteer for future IHRC campaigns or for more information please contact the IHRC Campaigns Team on (+44) 208 904 4222 (EXT 1011), or via email at events@ihrc.org