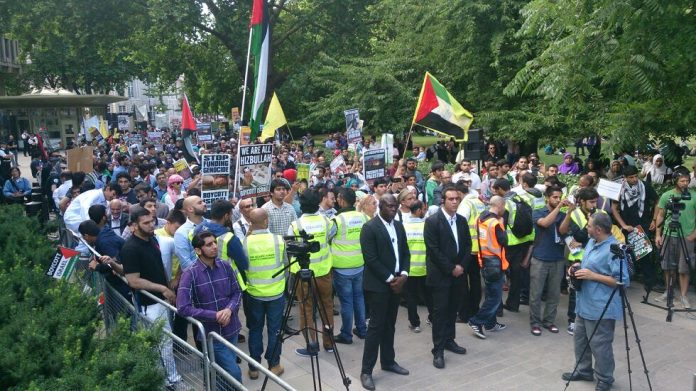 On Friday 02 August 2013, an estimated three thousand people attended the Al Quds Day Demonstration in London.  The cultural and religious diversity of demonstrators this year reinforced the theme of ‘United for Palestine’.  The annual event was on the last Friday of the holy month of Ramadhan to coincide with International Quds Day, expressing a united call of solidarity with the Palestinian people and opposing the oppressive Zionist regime.

The day ended with a rally outside the U.S Embassy, where prominent speakers and personalities condemned U.S-led support for the Zionist regime, which has enabled Israel to commit numerous acts of terror violating international law.

Palestinian national football team player and hunger striker, Mahmoud Sarsak, who was imprisoned in Israel without trial or charge, joined the demonstration and later spoke at the rally, giving a first-hand account of the torture he suffered at the hands of the Israeli authorities.

Khader Adnan, a member of the Palestinian reconciliation Committee, sent a video message in supports of Al Quds Day 2013 and explained how he was arrested by Israeli authorities without any formal charges against him and was only released after a hunger strike for 66 days.

Video messages from over 40 Palestinian people on hunger strike that have been the focus of IHRC’s Palestinian Prisoners Campaign (launched on Al Quds Day 2012) were played on the big screen outside the U.S Embassy.  This showed our supporters how the local campaign effort by activists is part of a global effort fighting for the release of these innocent individuals.

Al Quds Day 2013 in London approached the issue of standing for the oppressed through the prism of the Palestinian struggle and successfully united all demonstrators around the issue of Palestine.

Other media resources from the day are also available, for images click on the links below;

A video with highlights from the demonstration: http://www.youtube.com/watch?v=_bp2E85HIAk