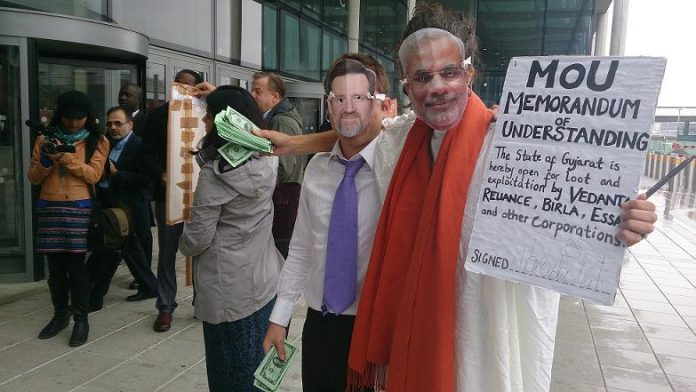 On a rain drenched Monday, some 100 people turned up to protest outside Brent North MP Barry Gardiner’s surgery at Brent Civic Centre.  Modi, is widely held to be the the inciter of massacres of Muslims across Gujarat in 2002.  IHRC’s report on the massacres can be read on-line, but read with caution, the contents are quite harrowing.

Despite the allegations against him, Modi has found himself re-elected, and now invited to speak at the British parliament by Gardiner.  This sparked South Asia Solidarity Watch to call and organise the protest on 9 September.  They were supported by a number of groups including IHRC, Council of Indian Muslims, Foil Vedanta IWA, Birmingham and others.

When Gardiner arrived, protesters approached him to rebut his arguments in favour of inviting Modi [link to video].  It transpired that a constituent with a Muslim name had been denied an appointment at Gardiner’s surgery today, but an English named constituents was granted an appointment despite calling to book much later.  This was the first of many actions planned to protest Modi’s invitation.  Already, since this campaign started, it has been claimed that Modi is too busy to come to the UK now.  Let’s make sure both he and Gardiner are shamed for their complicity in the crimes against the innocent in Gujarat.