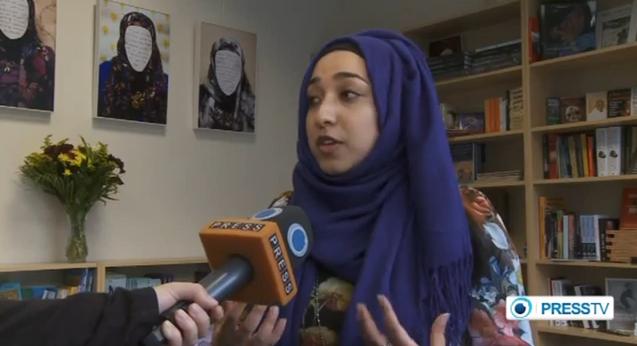 Read a report and view press coverage of the exhibition under a video conversation between Nasreen and Lena Mohamed.

The Artist’s Reception was attended by a wide spectrum of people, from journalists and other artists to community leaders and members and academics.  Jamal al-Lail’s work on exhibition included her series Beyond the Veil that was a timely look at the objectification of Muslim women and challenged the narrative of the covering of both hair and face, using Kantian ethics.

Her photo series Pilgrimage recounted her own journey through the Hajj, and her road to self-discovery.  The Calling – a film can be viewed here http://www.nasreenjml.com/the-calling/4578762421, and asks the viewer to reflect on metaphysical questions including the essential question – Who is Calling?

‘When I was 8’ is a series of three videos recounting the artist’s move from Saudi Arabis to the UK where she is now mainly based, when she was 8 years old following a car crash that left her sister needing medical attention.

Below are links to coverage of the exhibition in the English and Spanish broadcast and print media.