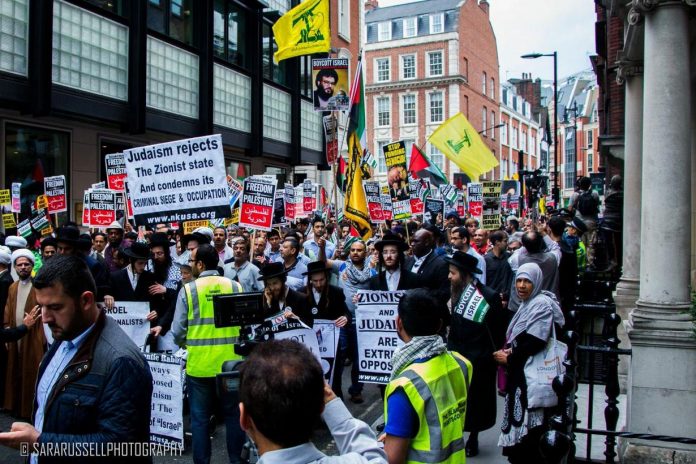 An estimated 9000 protesters marched to the US Embassy on Friday, 25 July 2014 as part of the Al Quds Day demonstration. The annual event was mirrored across the world with major cities such as New York, Cape Town and Sydney all hosting mass protests of their own. Held on the last Friday of the month of Ramadan, it is a day to stand shoulder to shoulder with oppressed people in the world against their oppressors; to stand in particular with Palestinians who are largely being ignored by the powers that be in the West.

Though it rained heavily and repeatedly throughout the day, crowds persisted. Many understood the gravity of the situation with the continuously rising toll of Palestinian casualties in Gaza – majority being innocent civilians. Protestors booed the likes of McDonalds and Starbucks as the march winded its way through Oxford Street – calling out their support of Israel and condemning them.

The rally took place just outside the US Embassy as the US still remains Israel’s fiercest ally, contributing to the onslaught on Gaza. Speakers included Massoud Shadjareh of the Islamic Human Rights Commission who gave an impassioned rallying cry; Roland Rance from Jews for Boycotting Israeli Goods who pointed out Israel’s blatant lies; John Rees from Stop the War who referred to Israel’s actions as “a war crime against civilians” and Foad Shatt from the Union of Palestinian Students UK who clearly pointed out that “occupation and peace are incompatible.”

IHRC Chair Massoud Shadjareh said: “Since politicians and media are ignoring the injustice of brutal war crimes being committed against innocent civilians in Gaza it is incumbent upon us to support for the victims.” The day successfully united people from all creeds and religions in that ethos.

Recap the day by looking through our PHOTO GALLERY below.